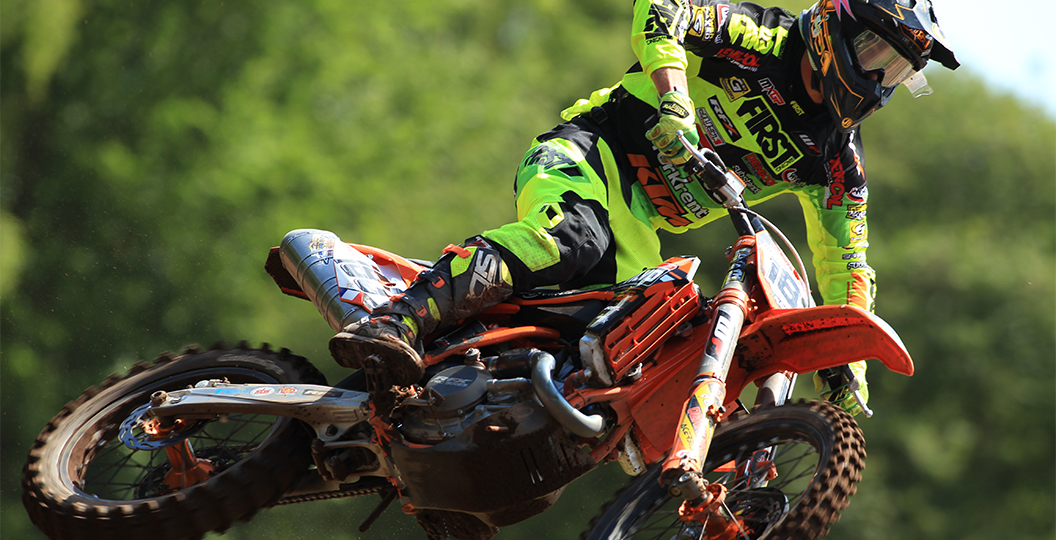 Shropshire, (UK) – 9 June 2015: After a five-week break from domestic action, the Wilvo Forkrent KTM team headed to Hawkstone Park for the fourth round of the ACU British Motocross Championship. The team arrived at the historic sand circuit without Jake Nicholls who is continuing his recovery from a wrist injury. Frenchman Steven Frossard was looking to make an improvement since his recent switch to the KTM 450SX-F, while Adam Sterry was nursing an injured hand following his crash in France.

Qualifying:
Qualifying saw Sterry produce a number of solid laps quickly getting a feel for the track to finish the session seventh fastest. In the MX1 class, Frossard quickly adjusted to the 450 producing a strong lap time to finish third fastest behind Simpson and Leok.

MX2 Race 1:
Following the lunch break, Sterry headed out on track for the opening race of the day and when the gate dropped he was inside the top ten and quick to pick off a couple of riders on the opening lap to move up to eighth place. He continued to push through the discomfort of his injury to move forward into sixth place at the finish line.

MX2 Race 2:
The second MX2 race of the day would see Sterry round out the opening lap in ninth place battling with Bryan Mackenzie. The pair were both pushing hard and soon moved ahead of Matiss Karro and Steven Clarke. Towards the end of the race Sterry was able to find his way around Mackenzie to take another solid sixth place finish.

MX2 Race 3:
In the final race Sterry made his best start of the day and quickly progressed into fifth place. Continuing to push throughout he closed in on Lenoir and Pootjes who were in front but just couldn’t find an opening to make a pass. As the race came to a close he had to be content with fifth, which meant he also secured fifth overall on the day maintaining his fifth place in the championship.

MX1 Race 1:
The opening race of the MX1 class saw Frossard rocket out of the start gate and storm into the first turn to take the holeshot and early race lead. Once out in front, Frossard continued to push hard trying to break the challenge from Simpson but a small mistake allowed Simpson to just take the lead. Regrouping during the second half of the race he tried to charge down Simpson, but had to settle for a great second place finish.

MX1 Race 2:
When the gate dropped for the second MX1 race Frossard once again made a strong start and pushed hard to challenge Simpson, piling on the pressure to try and force him into a mistake. That mistake came on the second lap when Simpson dropped it in a tight corner and slipped back to third. This allowed Frossard to break away at the front and settle into a good rhythm and take his first race win of the season.

MX1 Race 3:
With a possible overall victory on the cards, Frossard needed a good start to battle with Simpson and challenge for the win. Unfortunately Frossard made his worst start of the day and was only in fifth. He soon blasted his way through into second closing in on Simpson, however he went down on the same corner as Simpson had on the previous race and was back down to third. He picked himself up and set off in pursuit and as the race went into the final stages, he reduced the gap from five seconds down to just one but after having to slow for waved yellows after the bomb-hole, he lost two seconds and the chase was effectively over. Putting on a great show for the crowd, he had to be content with second in the race and second overall on the day.

Commenting on the day Adam Sterry said: “Coming into this weekend it was always going to be tough after injuring my hand last week in France at the GP. At the start of the week I wasn’t sure if I would be able to ride but I’ve been having physio every day. I knew it was going to be painful and I had pain in every race but no excuses because I didn’t ride as well as I could have. Although, fifth overall with an injury on a punishing track like this is not too bad.”

Adding, Steven Frossard said: “Today has been a good day. I got good starts and had a good feeling on the bike. I was enjoying my riding and it felt good to regain some of my speed and produce some good lap times. It also felt good to get the race win on the 450, just one week after making the change from the 350 – so I am really happy.”

Summing up, Team Manager Steve Turner said: ”It was good to see Steven ride like we all know he can. It was good for him, good for the team and the crowd here at Hawkstone Park; Steven and Simpson put on a great show. It was a shame he lost the time with the yellow flags at the end of the last race because it robbed the crowd of a real bar banging finish.

“Adam didn’t ride as well as we know he can but to be honest we didn’t know if he would even be fit to ride at all at the beginning of the week. Harris and Ross did a great job with him and it meant he could compete and take home another 46 points.”