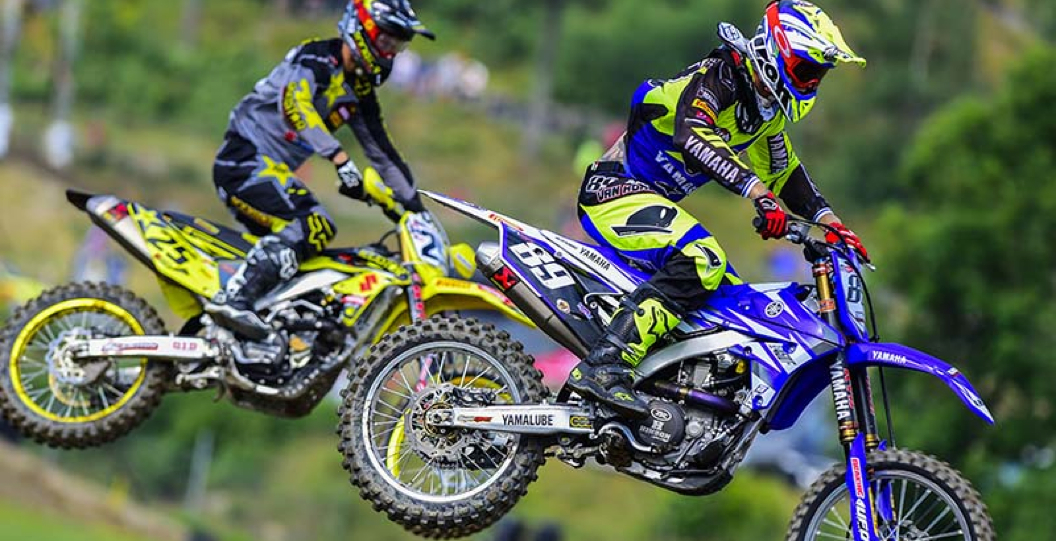 Locked and loaded for Loket

LOKET (Czech Republic), 23 July 2014 – It has been a customary stop on the calendar of the FIM Motocross World Championship for the best part of the last ten years, with seven Grand Prix’ over that time period, the steep and choppy clay based terrain in Loket, Czech Republic, gets set to host round fourteen of the seventeen round MXGP series.

While the initial excitement heading into this weekend was the extremely high likelihood of Red Bull KTM Factory Racing’s teen-age sensation Jeffrey Herlings wrapping up his third consecutive FIM Motocross MX2 World Championship, everything has been thrown into turmoil with news breaking on Monday 21st of July that the Dutch talent had crashed play riding on a 85cc and broken his femur. KTM later announced that a pin had been surgically inserted into the youngsters left leg to secure the fracture and that the operation went smooth and was a success. Herlings tweeted the following day “It ain’t over until it is over. There is still a lot of hope and motivation, everything is still possible and it still looks positive”, just a glimpse of the attitude that has seen him go undefeated in every MX2 Grand Prix he has contested since late 2011.

Meanwhile, one champion will be crowned this weekend with it being the sixth and final round of the FIM Women’s Motocross World Championship, and it is more than likely to be either FontaMX Yamaha Racing’s Kiara Fontanesi or Bud Racing Kawasaki’s Meghan Rutledge who are separated by only four points.

For the red plate holder and defending champion Fontanesi, it will be a case of knuckling down and fighting hard, as she has gone on the record to say Loket is not one of her favorite tracks. Meanwhile the Australian Rutledge doesn’t care about what kind of track is thrown at her, she just wants to win and is clearly hungrier than ever.

Also heating up this weekend, the sixth round of the European Championships EMX125 is all set to take place with the series leader Red Bull KTM Racing’s Davy Pootjes, who leads Rockstar Energy Suzuki Europe’s Brian Hsu by seven, set to return after breaking his shoulder at the previous round back on June 22nd in Teutschenthal, Germany.

It has not been the easiest season for Red Bull KTM Factory Racing’s Antonio Cairoli, but with four rounds to go and four from four victories in the last four races, the goal is in sight, all he has to do is take home some solid points this weekend to be well on his merry way to wrapping up FIM Motocross World title number eight.

Currently second in MXGP’s championship standings, Yamaha Factory Racing’s Jeremy Van Horebeek trails the Italian by sixty-two points meaning his chances at winning the title are pretty slim. Van Horebeek has been taking this season round by round and still remains confident he can win a Grand Prix before the season is out. Given he is a fan of hard pack, slick surfaces with loads of elevation, and Cairoli is not, this weekend could be the weekend the young Belgian puts that Yamaha YZ450FM on top of the box.

The view is always best from the top, a sight Rockstar Energy Suzuki World’s duo Kevin Strijbos andClement Desalle are familiar with here in Loket. Strijbos has been victorious here on two occasions, once in 2005 and then again in 2007 while his teammate Desalle won here in 2009, 2011 and 2013. Both riders cannot be counted out this weekend, Strijbos in particular as he looks to promote himself from the third step of the podium which he has occupied six times already this season. Meanwhile, Desalle will be returning after sitting the last round out due to an injury from his first turn crash at MXGP of Sweden.

Another rider to return from injury this weekend, Monster Energy Kawasaki Racing Team’s Gautier Paulin will be back on the gate after his seven round hiatus, alongside his teammate Steven Frossard who at MXGP of Finland finally uncorked his first bottle of champagne since 2011.

There is no doubt the MX2 class is going to be ridiculously intense over the next four rounds of MXGP. Just like at Brazil this year and Belgium and Great Britain last year, the guys will line up genuinely believing they can win.

One of the most interesting factors this weekend is the fact that not one rider on the start line has won a Grand Prix. With CLS Kawasaki Monster Energy’s Arnaud Tonus out with a broken shoulder andRockstar Energy Suzuki Europe’s Glenn Coldenhoff still on the mend after having his knee reconstructed, a milestone for who wants it bad enough is within reach for everyone else.

Looking at the points, Red Bull KTM Factory Racing’s Jordi Tixier trails Herlings by 145. There is 200 points up for grabs if he was to win every remaining moto this season, which is not going to be easy with the likes of fellow Frenchmen Wilvo Nestaan Husqvarna Factory Racing’s Romain Febvre and CLS Kawasaki Monster Energy’s Dylan Ferrandis also chomping at the bit for their first ever Grand Prix win.

The title is also within reach for Febvre and Ferrandis, who sit third and fourth in the championship respectively, if they were to dramatically up their game. Febvre trails Herlings by 178, while Ferrandis trails by 191, given their records of consistency the title is pretty unlikely for both, although it has to be said that it is do-able.

Moving on, Honda Gariboldi’s Tim Gajser cannot win the title even if he won every race from here on out but he can move up in the championship as he trails Ferrandis, who is in fourth, by thirteen points. It would also be cool to see the seventeen year old take his first ever MX2 win, an experience which would look good in the confidence bank as he sets his sights on an eventual MX2 world title.

Also lining up with the possibility of taking home their first ever MX2 Grand Prix win, Standing Construct KTM’s Valentin Guillod has been showing flashes of brilliance throughout the season even though it has only come together for the Swiss in qualifying so far, while KTM Silver Action’s Jose Butrón andYamaha Factory Racing’s Christophe Charlier need to be making the most of their final MX2 races as both will be forced up to MXGP next year.

If the entire season is taken into consideration for those who will race this weekend, none of the results in the MX2 world championship are set in stone with not one rider being a lot more consistent than the other, and not to mention they’re contesting a sport in which ANYTHING can happen, a fact that was reiterated by Jeffrey Herlings on Monday morning.