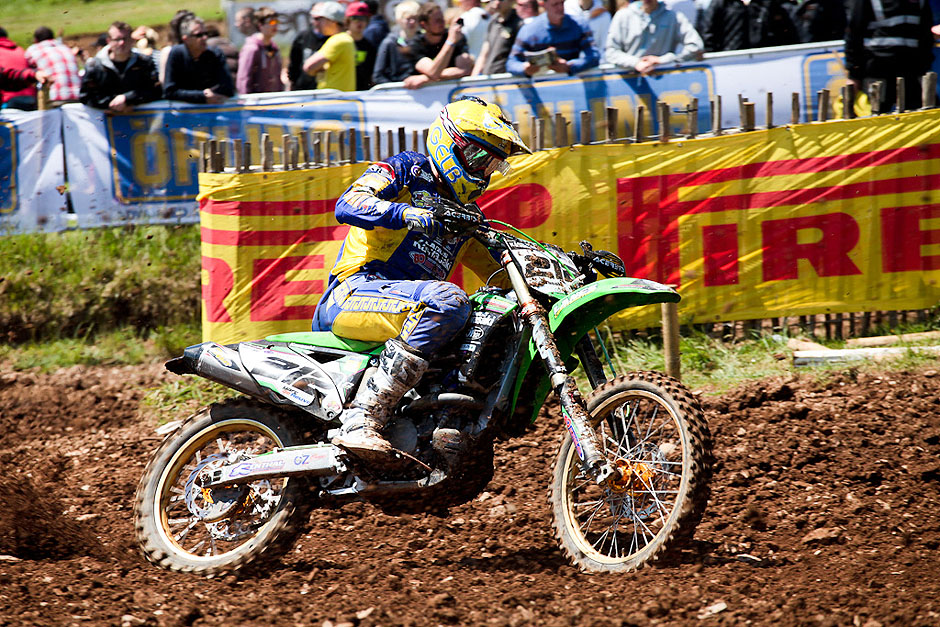 After a two-week delay due to weather and track conditions, Lanes Kawasaki finally made its way to Landrake in Cornwall this past weekend for the season opener of the 2012 edition of the Red Bull Pro Nationals championship. With one man down, team principal Dean Lane took over duties as mechanic for the day.

Youth rider James Harrison competes in the Elite Cup Rookies class, and so on Saturday morning the fun began with qualifying, where Harrison immediately made his mark with a fourth place. The first of three races on Saturday got off to a good start. Fifth around the first few corners, Harrison found himself progressively pushed back by tough rivals, ending in tenth. In the second race, Harrison started mid-pack, and rapidly made his way forward. A crash dropped him several positions back, but he fought back to end the race in fifteenth. In the final race of the day, Harrison started in fourth, but several crashes undid that advantage, forcing him to work his way forward several times, finishing in twelfth.

The races on Sunday again were a battle from the back. Mid-pack around the first few corners, Harrison leapfrogged several rivals in the early stages of the first race until the field was too widely spread to make much progress. With a lap remaining, Harrison was able to mount one more challenge to end the race in eighth. Harrison ended the final race of the weekend in thirteenth place for an eleventh place overall.

Thompson’s first race got off to a blinding start. Second into the first lap behind GP rider Elliott Banks-Browne, he soon found himself under pressure from more experienced rivals. A crash early in the race set him back ten places, of which he was able to recover four for a great finish in tenth place. Thompson started the second race from dead last. Pushing hard, he soon found himself in several positions up, but on the fast track, it was difficult to make progress amongst the mix of MX1 and MX2 bikes. Slow but steady progress was rewarded with a thirteenth place in the closing laps for a twelfth overall on the day.

De Reuver also had a fantastic first race start. Around the first few corners in fourth, de Reuver settled into a good rhythm. As time wound down, he made his move on the rivals in front of him and leap-frogged into second at the finish line. The second race was somewhat different. With his race bike failing to start in the team awning before the race, it was decided to use his second bike instead. Compared to his rivals, de Reuver found himself at a disadvantage, this notwithstanding, he worked hard to make progress. Ending seventh at the chequered flag, de Reuver had to make do with a fourth overall on the day, third but two points away.

“Today was a very good day in the end,” team principal Dean Lane commented. “Yesterday James had a few half-decent rides from fairly average starts. Today we had Marc and Sunny riding in the MX1 and MX2 combined. In the first race Marc got off to a good start, ended up second in the race, and Sunny was hauling all the way through. If we can just get Sunny out of the gate, I think a top ten is achievable. He’s riding really well.

“In the second race we had a little to-do with Marc’s bike in-between races, so we had to get him ready on his spare bike. He didn’t get off the gate, and ended up putting in a steady ride for seventh. Sunny was absolutely awesome, came hauling through, got up to thirteenth in the MX2, and rode a really good strong race all the way through.”

Marc de Reuver (#212): I didn’t like the track so much, I still had the setup from Lyng because my mechanic is away this week. The first race was good; I had a little arm pump but it went better and better and I finished second, very close to Sword. Then my bike didn’t start for the second race and I had to use the second bike which I haven’t ridden on. The suspension and the handlebars were different, and so I finished seventh.

Sunny Thompson (#177): First race got a really good start, was lying in third for a bit, felt really really good, and going really well, and then dropped it on one of the corners, slid out, and I was pretty gutted because I thought third was good. I think I got back to about tenth in the first race. In the second race I got last off the start, and came through to thirteenth. I felt really good, kept pushing and nearly got Hawkins at the end, so overall I’m really happy with how I rode. I need to cut out the mistakes and get a better start, and everything will be good then.

James Harrison (#153): I had a really bad weekend. I rode rubbish all weekend long, really. The track was alright, it was a a bit dry and got really rough, but it’s the same for everyone.