Lanes Kawasaki follows up with a Hawkstone top five

Freshly returned from battle in Italy, Lanes Kawasaki found itself fighting for top honours at home on one of Britain’s most venerable tracks, Hawkstone Park. Although overcast early in the morning, the weather changed to balmy sunshine throughout the day with record crowds coming to watch the annual Hawkstone International race.

Qualifying in the morning saw the team’s MX1 star rider Marc de Reuver pull a seventh place out of the bag, while the team’s MX2 rider, Sunny Thompson, qualified in thirty-fourth. At race time, Thompson found himself solidly in the middle of the pack. An early spurt from a mid-pack start put him in contention for a top twenty position, but a late battle with rivals Erki Kahro and Nathan Watson dropped him to twenty-second place. The second race saw him get off to a good start again, but a crash early on left him with an uphill battle in the latter half, returning to twentieth with the two-lap board out.

De Reuver on the other hand had a battle of a different kind on his hands. A veteran of this track, De Reuver suffered from arm pump for much of the race, making it difficult and dangerous to go all out. A start from outside the top ten turned into a well-executed and safe sixth place in the first race. The second race saw a much improved start in sixth, which developed into an interesting cat-and-mouse game with fellow Kawasaki rider Martin Barr, culminating in De Reuver taking fifth place for a sixth overall on the day.

The super final, a combined race of the top fifteen of each class, saw De Reuver charge hard all throughout the race, arm pump finally no longer an issue, ending the race in fourth place.

Team principal Dean Lane declared himself satisfied with the day’s proceedings: “The day went pretty well according to plan. Sunny in the MX2 struggled a bit fitness-wise, but with another few weeks under his belt he’ll be ready for Fat Cats. Marc rode really well; he suffered from arm pump in the first two rides and came through well. The super final I’m really pleased with. Roll on Fat Cats, we’ll try to go up there to do a bit of practicing mid-week. Sunny’s been up there through the winter so he knows the track, now we just need to get Marc up there to get him to do the business.”

Sunny Thompson (#177): “Today was not bad; all in all a good day, really. I had a really good start in the first race, and that was about it. I got a bit tired towards the end, so I’m working on my fitness this week and next to be ready for Fat Cats for the first round of the British.”

Marc de Reuver (#212): “Qualifying was really not exciting; I had some incredible arm pump. Hawkstone Park is arm pump city for me. The first race I was riding tight and struggling, but still got a sixth. The second heat was really good; I came up to the front but my roll-offs broke in the fourth lap, I didn’t want to ditch the goggles, so I had to pick my lines very well. So fifth was still ok. The super final I was pleased with. I was fourth, I saw Desalle and the 10 minute clock in the corner of my eye and we were on the same pace. After that he was fast, of course, but it gave me a really nice feeling. I’m very happy!” 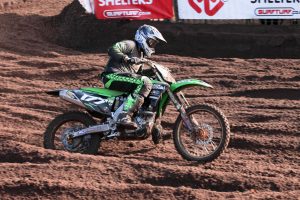