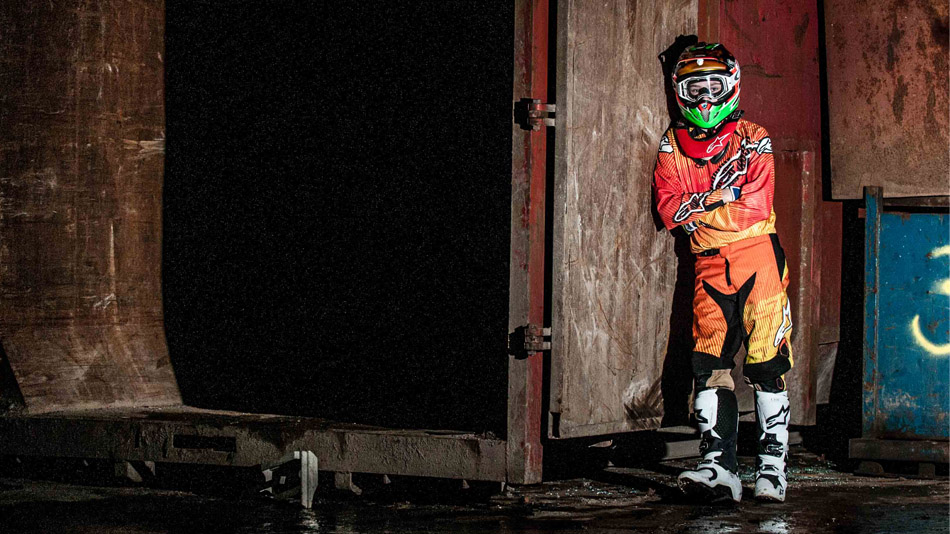 We caught up with up and coming youth rider Billy King recently, to find out what has been going on with him. Billy was a Team Green rider in 2013, but suffered from being one of the tallest riders in his class. Billy has decided to move up to the MXY2 class in 2014 and will be competing in the MX Nationals this year. Everything was going to plan for Billy until disaster struck whilst practicing in the USA with Aaron Booker.

So, we caught up with Billy to see how things were progressing with his injuries and also whether he’ll be ready for round one of the MX Nationals!

MX Vice: You’ve had a bad injury, can you tell us a little more about it?

King: Yeah, I sustained a bad injury whilst I was in the USA training for this season. I was at a private track somewhere in the desert, we had done some outdoor training and then we moved onto the supercross track. I had been doing the full size AMA triple perfect each time, but then another ‘let me do it one more time’ moment bit me and I came up short. I took the full impact through my legs and broke my tib and fib in both legs, my left wrist and had a pretty bad concussion. I’d just like to thank the Booker family and Pendrich Kawasaki team for looking after me whilst I was out there with no family members.

MX Vice: What’s been the biggest thing you have missed being injured?

King: I’d say the biggest thing I have missed whilst I’ve been injured is doing the Garmin Arenacross, I love arenacross, because I love jumps. I have a nickname made up by Bry Mac as ‘jump king’ [laughs].

MX Vice: Will you go back to the USA again next year to train?

King: Yes, I will hopefully go back to California next year around Christmas again to train. It’s just a lot easier to ride over there, because you can ride whenever you want and get lots of bike time without having to worry about the weather.

MX Vice: You train with Rusty, how is that helping you?

King: Yeah, Rusty (Russ Wells) has been a massive help to me. I have been with him for nearly two years now and I’ve seen a massive improvement. He has helped with my recovery from my injury too, as soon as I got back from the USA I was in the gym a couple days later with casts on just trying to maintain some fitness. I wouldn’t be where I am now without him!

King: Social media is a big part when it comes to sponsors and people that are helping you out. If they help you out they expect you to put there name out there, and give them something in return, so media coverage is a good way of getting there names out there and helping them get noticed.

King: I wanted to ride the MX Nationals, because it is a new up and coming series with good riders and good tracks. I personally think it will be the biggest series in the UK one day.