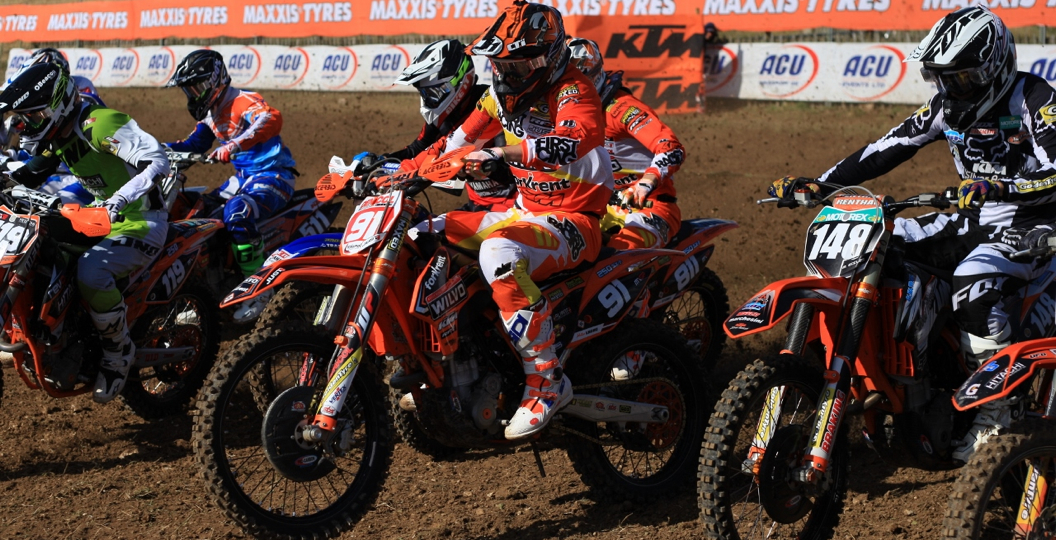 Amesbury, UK – 11 August 2014. The penultimate round of the Maxxis ACU British Motocross Championship saw the Wilvo Forkrent KTM team head to Cusses Gorse near Amesbury, Wiltshire. The hard pack circuit was a contrast to the sand of the previous round at FatCat. Heavy overnight rain on Saturday and light showers in the morning on Sunday left many fearing the worst, but after a few practice laps it was clear that the track was going to produce some great racing.

Sunday started with qualifying and superpole which saw Matiss Karro top the qualifying times and repeat it in superpole. For Adam Sterry qualifying would see him finish 7th fastest and move up to 6th in the superpole session.

After the lunch break it was time for the first race of the day and as the gate dropped both Sterry and Karro rocketed out of the gate and round the first corner in first and second positions with Sterry having the upper hand on his team-mate. Karro then took over the lead at the end of the opening lap. The pair set a fast pace and quickly increased the gap on the rest of the field and took a comfortable one-two result.

The second race of the day saw Karro produce another great start and take the early race lead while Sterry was inside the top five. After a few laps Karro had built up a comfortable gap over second place and rode consistently to take his second race win of the day. Unfortunately after making a superb pass on Watson to take 3rd place Sterry made a small mistake and lost the front end and crashed. After remounting he wasn’t able to make any progress on the riders in front and had to be content with 8th place.

Going into the final race Karro was looking to make it a clean sweep of race wins while Sterry was hoping to overcome the bad result in the second race and land an overall podium. As the gate dropped Karro settled into 2nd place behind Mel Pocock while Sterry was inside the top 10 until a crash on the opening lap dropped him to just outside the top 15. As the laps ticked by Karro sized up Pocock and took the lead which he held until the finish to make it a hat trick of wins for the Latvian. Following his early race crash Sterry battled hard to push through the pack and recover to 7th at the finish.

At the end of the day Karro took the overall win and extended the Championship lead to 39 points, while Sterry finished 4th overall and moved past Bradshaw into 3rd in the Championship with a 16 point gap going into the last round at Foxhill.

Commenting after the meeting, a happy Team Manager, Steve Turner said: “Matiss rode great again today and showed that he has matured as the season has progressed and it’s now seven race wins in a row. Adam rode great in the first race and was riding just as good in race two until a small crash lost him 3rd place and the chance of 2nd overall.

“In the Championship Matiss now leads by 39 points over Pocock and Adam has moved up to 3rd and is 16 points ahead of Bradshaw. Before we set off to the meeting at the weekend we would have gladly took these results so obviously we’re all delighted. We now have one round of the Championship remaining and I hope they both stay fit and healthy and finish the job at Foxhill.”

Maximum man on the day Matiss Karro said: “Coming into this weekend I had the red plate and was a bit nervous but I knew the track from having practiced here in the past and I knew that Justin would produce a great track no matter what the weather did.

“The first race I got a good start behind Adam and passed him for the lead and the race win. Then in the second race I got a big hole-shot and took another race win. In the last race Mel got the start and I followed him for a few laps and worked out where to make a move and took the race win. With just one round to go I have a nice 39 point lead and with the three races to go we can hopefully win the Championship.”

A slightly disappointed Adam Sterry added: “Today has been OK.  The first half was better than the second half of the day. In qualifying I was 7th and then moved to 6th in super-pole which was enough for a good gate pick. Then in the first race I got the hole-shot with Matiss, he passed me on the first lap but I stayed with him all race long and finished 2nd. In the second race I was in 3rd and slipped off and finished 8th and then the same in the last race I had another little crash and finished 7th. Overall I’m happy with today. I’ve moved into 3rd in the Championship and I’m now 16 points ahead of Bradshaw going into the last round so it’s all good.”