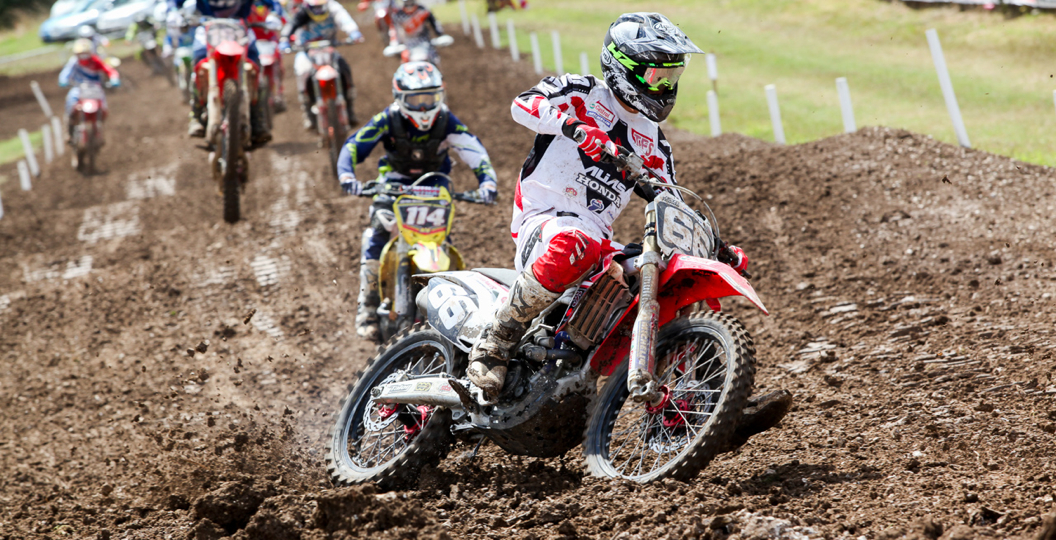 At the beginning of the year, JAR Honda was looking forward to the seventh round of the Maxxis British Motocross Championship, because it was as close to a home race as it could get. Months later though the announcement was made that Drumclog was off the calendar, replaced by a well-known practice venue in Wiltshire, Cusses Gorse.

The track had withstood some severe weather overnight, and with the surface still wet, qualifying got underway. An hour later, MX2 rider Lewis Tombs the MX1 rider Matt Moffat had finished in seventeenth and thirteenth respectively, Moffat missing out on the super-pole by two hundredths of a second.

For Tombs, the first race was a steady run in the top ten from a mid-pack start, ending the race ninth. Tombs then got the second race underway in seventh but was unable to capitalise on it, settling into ninth for the majority of the race. With just several laps to go, he had to concede that position for a finish in tenth. The final race saw Tombs struggling to make progress from a start in thirteenth, but his perseverance paid off in the latter stage of the race, ending eleventh for an eighth place on the day.

Moffat also had a good start to the day. Through the first corners in twelfth, he settled into thirteenth for the race, before losing two more positions at the end of the race. The second race had a slightly worse start but Moffat was quickly on his way up the pack again. Unfortunately a freak gust of wind blew him off course over a jump and he lost control of the bike. After going down hard, he had to sit out the remainder with a damaged bike before going back to the line for the final race of the day. There his start from the back of the pack saw him quickly ascend to twenty-first again, where another crash and the after effects of the crash in the previous race forced him out of the race again. With only one race under his belt, Moffat ended the weekend in twenty-first.

Today was a decent enough day, I was top ten overall, so that was alright. Qualifying didn’t go too well, it kind of let me down a bit with gate choice. The first race was alright actually, I had an average start but worked hard the first few laps and managed to get into tenth. I was on Bryan and Neville, but I faded halfway through. In the second race I had a really good start, around seventh, but for some reason I didn’t have much pace, and ended up ninth or tenth. In the last race I had a horrible start, and every time I tried to pass someone I ended up getting passed, so I regrouped and pushed hard for the last half of the race, and managed to pick off a few people to end eleventh. Overall it was a steady day, just what I’m like really, plodding along and steady.

I’m still in one piece but I’m disappointed with today. I had a big crash in the second race, but luckily everything’s ok. I had a fifteenth in the first race, and nothing else, so I’m disappointed in this round. Thanks again to Richard and Jonathan and everyone else who is supporting me.

It was good to go to a new track this weekend. It was clear to see that the organiser put a lot of work in and made it successful. Lewis had a really consistent day and was looking much more comfortable on the bike. Matt again struggled to gate well, which makes it tough to come through the pack. Unfortunately he got caught out by the wind over a jump and had a big crash. We have a bit of work to do before the next race where I’m sure we can make amends.