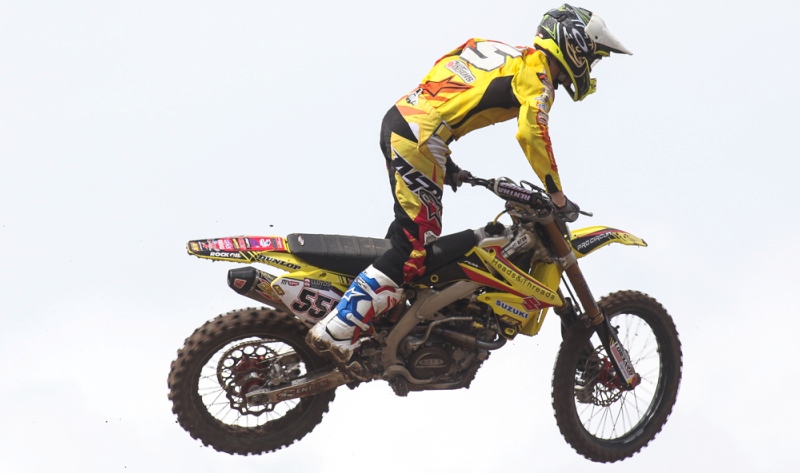 There is always a buzz in the air before the British Motocross Grand Prix. Who will be selected out of the plethora of entries to be a wild card and who will be successful in their endeavours? For Heads and All Threads Suzuki, the weekend turned out to be a good event, despite some downpours on Friday and Saturday that caused some amendments to the timetable.

With the team’s MX2 rider Luke Burton entered into the Motocross European Championship’s EMX300 class on a RM250 two-stroke bike, it was his turn first to go out onto a very wet track on Saturday morning. After the session’s end, Burton found himself seventh in the class. MX1 rider Graeme Irwin had his pre-qualifying session later in the day, ending fourteenth-fastest in the premier MXGP class.

On Saturday afternoon, Burton’s first race did not go too well. A crash dropped him from the front to dead last, and whilst attempting to catch up, Burton crashed a second time, which damaged the bike and ended with a long walk back to the pit lane. With the bike repaired and a good warm-up session early on Sunday morning, Burton got off the blocks well for his second race. In fourth until a crash with another rider, Burton remounted to finish the race in sixth for an eighth place overall on the weekend.

In the MXGP class, Irwin found himself racing three races across the weekend, the first being his qualifier on Saturday afternoon, with his two races later on Sunday. In the former, Irwin held his own against stiff competition to end fifteenth. The latter on Sunday delivered mixed results.

Irwin got off to a good start in his first race. Seventeenth off the start, he was well on his way to a top fifteen spot when a rival’s passing manoeuvre went wrong and both went down. The frantic seconds of getting the bike restarted and getting back into a rhythm cost Irwin dearly, and it was only until late in the race that he re-entered the points to finish nineteenth. The second race of the day was an improvement on the first. A start in twentieth turned into a consistent ride that earned Irwin another three places and five points, ending the weekend eighteenth overall.

“We had Luke on the RM250 in the EMX300 class, in the first race on Saturday he had a few crashes and we had the shifter in the wrong place, so we got that right for Sunday morning. He was fourth-quickest in warm-up practice and then sixth in the race, which is good. It was a good race, and if there were more people on the line, I think it’d be fantastic. The sound of the two-strokes is absolutely fantastic around the track. As for Graeme, superb. You could look at it and say ‘yeah, sixteenth and a nineteenth’ and then sigh, but the level is high in the MXGP class, Graeme’s speed is good enough to be eighth or twentieth, that’s where he’s at. If he gets a good start, he can run eighth and finish eighth. If you start in nineteenth, you’re battling the whole race for seventeenth place. The quality of riders is deep, you have thirty top-quality riders, the best in the world here! I’m happy, his lap times were good, he’s got good speed, I can’t ask for anything more from the weekend, really very good.” — Neil Prince, Team Manager

“The weekend went really good, apart from the first race. I was riding steady all weekend, just learning, I don’t ride with these guys all that often. I was fourteenth in pre-qualifying, and then finished fifteenth in the qualifying race, which I was happy enough with considering these are the fastest riders in the world. I was sixth-fastest in free practice on Sunday morning, I felt good. In the first race I don’t know what Matiss was thinking when he went down and took both of us off. But that’s racing and I don’t stress about it. I got back up and finished nineteenth despite some goggle problems. In the second one I just had a steady ride, my speed was good but there was a group with very similar speed and I just happened to be at the back of that group; I finished sixteenth. I’m happy with the way I rode, I’m now looking forward to the Grand Prix of the Czech Republic later in the year to have another shot at it. Big thanks to Heads and All Threads for making this weekend possible, and all my sponsors as well.” — Graeme Irwin, MX1 #555

“I was seventh in qualifying, then lined up for the first race, got an ok start. I went down, got back up and going, then had a big one on the step down and broke the bike. I got it back to the pits and DNFed that one. Moto two got out the gate first, then got passed up the start straight and came out the first corner in fourth. Was in fourth for a while, then Josh Spinks and I got tangled up, I came off the bike, got back up in sixth, and then just came home in sixth. It was a good day though, not bad for a 2008 RM250 we picked up a week ago.” — Luke Burton, EMX300 #40