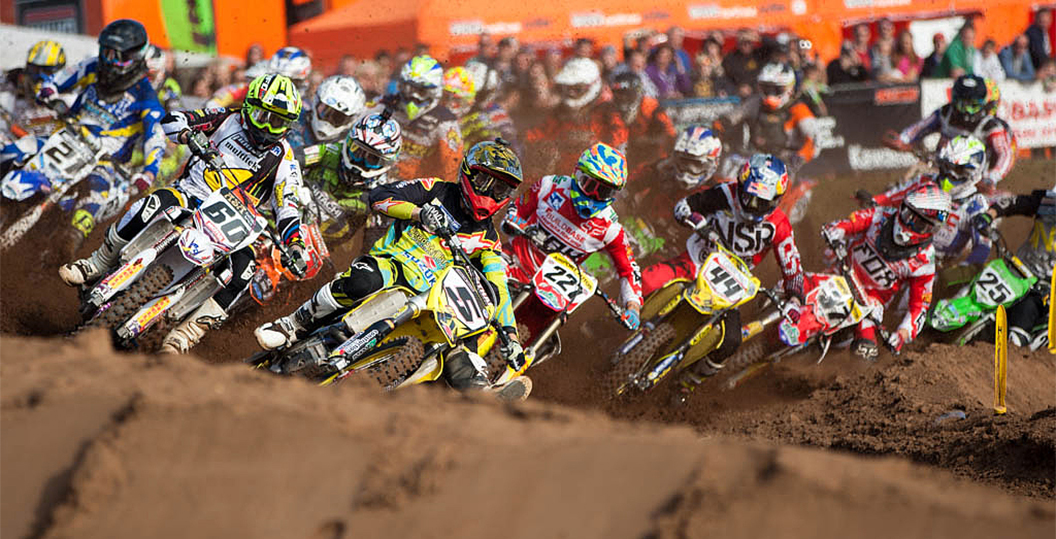 The 2015 season was brought to a close for the Heads & All Threads Suzuki team at the final round of the British Championship at Fatcat Motoparc in Doncaster on Sunday the 4th of October. Graeme Irwin narrowly missed out on a podium result in MX1, whilst Neville Bradshaw and Gary Gibson came home in 15th and 26th in MX2.

After qualifying in 9th, Irwin found himself battling for 5th in race one, but lost out to Gert Krestinov in the final laps to cross the line in 6th. Taking the holeshot in race two, Irwin put in some solid laps to gain some breathing room, but a mistake saw him take the chequered in 3rd. Going into the final moto, Irwin was in 3rd overall, but a bad start forced him to push hard that resulted in some big moments on the now very rough sand circuit and he knew a podium finish had slipped away. Irwin crossed the line 9th, claiming 4th overall and ended his championship campaign in 6th.

“It wasn’t an easy day, but it was actually quite good really, except for the last race. I didn’t get a  good start in the first race, and I battled with Simpson for a couple of laps, and I was unlucky that Krestinov just got me before the end. We weren’t too far off of the lead, everybody was riding fast. I took the holeshot in the second and tried to get a gap, but I just tightened up and fell back to 3rd, but it was still a good result. I just got a really bad start in the last, and I had a couple of big moments. I knew I’d blew the podium, so I just tried to settle down and have a good ride. I’d like to say a big thanks the Heads & All Threads Suzuki team for the last three years. It’s been amazing working with such a good team, and I wish them all the best for 2016.”  — Graeme Irwin, MX1, #5

With a deep field in MX2 bad starts hampered progress for Gibson and Bradshaw. In race one, Bradshaw suffered with severe arm pump as a result of a damaged fork which saw him drop back to 19th, whilst Gibson, who had crashed on turn two, climbed from last to 21st.

In race two, Gibson went down in the first lap, but by putting in consistent laps he climbed into 20th, with Bradshaw taking 14th. Race three and both Bradshaw and Gibson found themselves vying for top fifteen. Bradshaw managed to gain some headway and crossed the line in 12th for 12th overall. Unfortunately Gibson took another spill after battling hard for much of the race and remounted to claim 21st and 26th overall.

“It was a tough day, everyone was a similar speed, it was kind of like where you started was where you finished type of thing. At times I was showing good speed and it’s good to know I can still carry it. To be outside of the top ten isn’t why we go racing, but you just have to put everything in to context with how my year’s been, and I’ve proved I can still do it, so we’ll regroup and start again next year. With the few races I’ve done with Neil and the team we’ve used them to our advantage towards bike set-ups and made some progress with that, so that should give us a bit of a head start for next season.”  — Neville Bradshaw, MX2, #272

“I’m usually a pretty good starter, I think my technique’s a little off with the smaller bike this year so it’s something I still need to work on for 2016. I was happy with my pace and fitness, I managed to come through the field well and my lap times were consistent, but the starts and my mistakes cost me. A huge thanks to the team for the continued support next year. It’s been a tough season but I’m happy they’re behind me.”  — Gary Gibson, MX2, #4

“We were unlucky Graeme didn’t get to third, he rode really well but a bad start in the last race just left him with too much to do. We’d like to wish him all the best for 2016. After going over Neville’s bike, we found the fork spring was broken, which would have caused his arm pump in the first race. In the other two races from where he started he rode solidly and got some good points really. Gary was riding really well, but his crashes cost him too much. He could have got top fifteen really.”  — Neil Prince, Team Manager

The 2016 Heads & All Threads Suzuki team of Josh Spinks, Neville Bradshaw, and Gary Gibson will be on the Suzuki stand at the International Dirt Bike show in Stoneleigh Park, Warwickshire at the end of October.