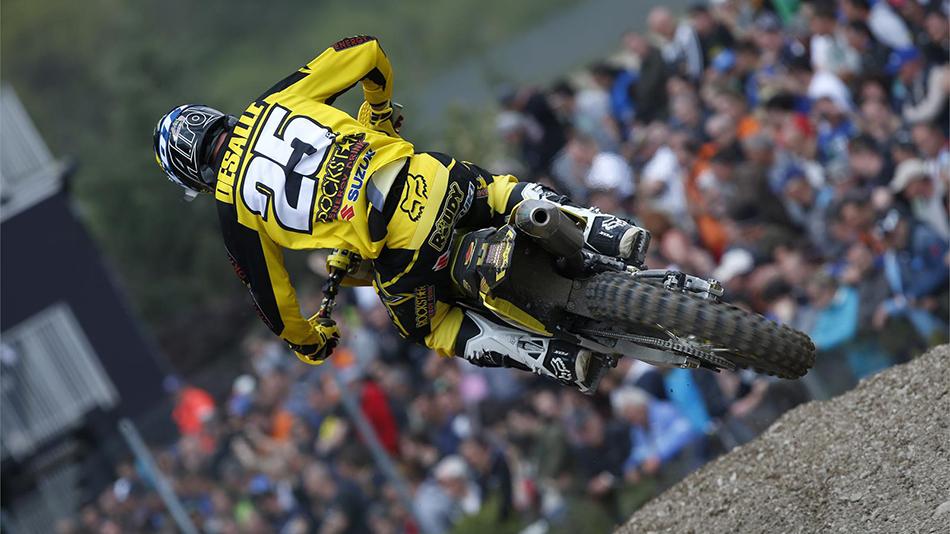 Hot and Cold: GP of Trentino

Unsurprisingly, it feels like the GP of Trentino (held at the scenic venue of Arco di Trento) really marked the beginning of the 2014 FIM Motocross World Championship, as the flyaway events feel like more of a novelty. Now, we are back at the more traditional venues in the heart of Europe, and as a result the crowds are coming out in droves.

Clement Desalle: Of course, it is always nice to win a GP. However, I believe that the confidence that Clement gained in Italy was more valuable than having another win next to his name. Clement is very fragile, when it comes to his mentality, in my opinion; he has to be one-hundred percent comfortable in order to thrive, hence why he has fewer GP wins than you would originally expect. I’m sure that you are thinking that Desalle was handed the overall victory at Arco di Trento, right? Well, make no mistake about it, the Belgian was more than fast enough on the slick, rugged hillside.

Following his recent lacklustre form, it was certainly surprising to see that he was such a threat. The fact that he now has the 2014 Suzuki 450f beneath him (rather than the 2013 model that they used at the flyaway races) must be advantageous; he has also had some time to build his strength up on and off the bike, since the season begun. Desalle is still far from one-hundred percent. But, now that he is somewhat close to Antonio Cairoli in the points, he does have to force the issue every time that the gate drops, if he is at least going to have a fighting chance in the latter stage of the year.

Jeffrey Herlings: I’m having a hard time deciding whether Jeffrey Herlings had a good ride at the GP of Trentino or not (by his standards, of course). The Dutchman was seemingly struggling with his recent injury, as his fitness wasn’t where it needed to be, as you would expect. But, despite this, he still proved to be superior, as he took yet another GP win. If he has a reason to worry, it is that he let Arnaud Tonus and Glenn Coldenhoff (two guys that have started to separate themselves from the rest of the field) smell blood in the water. Each time that he does this, their confidence is only going to grow.

However, when Jeffrey is back in his comfort zone, he should be unstoppable again (there is no reason to not believe this), which will put everyone back in their place. Overall, Jeffrey is still in the best spot, seemingly, as he has a lot more to give, whereas you would presume that Tonus and Coldenhoff are giving it their all to stay with Herlings, despite the fact that he is riding half-hearted.

Arnaud Tonus: Speaking of Arnaud Tonus, I believe that his ride at the GP of Trentino may have done more for his self-belif than his overall win at the previous round. Although his Brazilian triumph was a special moment, he surely knows in the back of his mind that it has a bit of an asterisk next to it. But, in Italy this past weekend, Tonus backed his ride up – he showed race winning speed, except, he didn’t actually cross the finish line first this time around.

However, in the grand scheme of things, results mean very little – it is the individual rides that really matter, and Arnaud looked like a GP winner at Arco di Trento. It is hardly surprising, the conditions suited him perfectly, and Sevlievo should be the same. So, if there is going to be an opportunity for Tonus to get into Jeffrey Herlings’ head, it is now; he has to take advantage of it.

Jeremy van Horebeek: In the excitement and hype that surrounds the opening rounds of the FIM Motocross World Championship, most have overlooked the clear improvement that Jeremy van Horebeek has made in the winter. If you take a second to step back, and really watch him ride, it is clear that he is much more fluid, confident, and comfortable, this year. Obviously, there are many factors that contribute to this, as the switch to Yamaha, and the experience that he has gained have undoubtedly been pivotal in his rapid improvement.

Quietly, Tommy Searle has been left behind in this group (yes, I realise I am going off on a tangent, but bear with me). When Tommy made the step up to MXGP (formerly MX1) alongside Jeremy, he was looked at as the stronger rider. But, this perception is changing rapidly, as the British rider has not garnered a podium finish yet, whilst Jeremy has shifted his focus to GP wins, following his recent string of success. Van Horebeek has established himself within that elite group, and no one has really noticed!

Antonio Cairoli: Antonio Cairoli is featured within this section based on the extremely high expectations that we have of him, and that he has of himself. In the grand scheme of things, it wasn’t necessarily a bad day for him, it was disappointing though. When you really think about it, it is not too surprising that he was not his usual dominant self at Arco di Trento, as if there is one place that he seems somewhat normal it is on slick, hard-pack tracks. For the first time in a while, he made a  handful of mistakes that could have ended in big crashes, which is unusual for the very cool, calm Italian. If I had to guess, I would put this down to the fact that he was trying to at least garner a podium finish in front of his home crowd.

Gautier Paulin: Gautier Paulin is going to look back on the GP of Trentino as a missed opportunity, and unfortunately, chances like that do not come around very often. So, what would have happened if he had gone on to win the second race? Well, Paulin would be just eleven points down on the Italian. However, instead, thanks to an engine issue with his factory Kawasaki, he is staring at a thirty-eight point difference after just four rounds. I do not want to call it a disaster, but, it is; Cairoli is not going to give him another opportunity to gain a cluster of points.

Max Anstie: Max Anstie has been blistering fast at times this year, so why does he have an average of just ten points per moto? Honestly, that isn’t good, and at the same time, his speed seems to have disappeared a little bit, too! Max is still on the trusty 2013 machine, and he will be in Bulgaria, too. So, maybe that is holding him back a little? Presumably, the 2014 bike is going to be much stronger, when (if) they get it figured out. Anstie picked up a measly seven points in Italy – he fell twice in moto one, and failed to finish. Then, in the second moto, he hit the gate and couldn’t work his way any further up than fifteenth. It may be time to flick the reset switch, for Max.

Dylan Ferrandis: I would have bet that Dylan Ferrandis would have enjoyed some success at Arco di Trento. After all, he was very strong at Ernee last year, and the conditions were not too dissimilar. However, he struggled to make any real progress all day, for whatever reason, and picked up just ten points. A mechanical failure in moto two did not help his cause, obviously, but he was still lacklustre in moto one. Since his race win at round one, Dylan seems to have fallen further and further off of the map, strangely. He has the speed, we know that; now it’s time for him to put it together on a consistent basis.