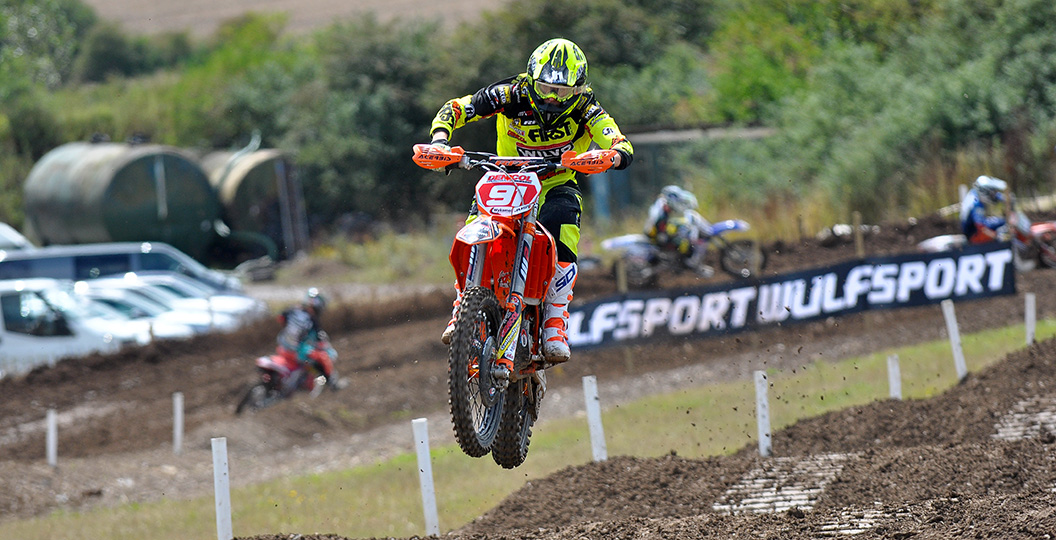 Cusses Gorse hosted a round of the Maxxis British Championship for the first time this past weekend, and it will more than likely go down as the turning point in the 2014 championship. However, who were the riders that benefitted from what went on and who failed to meet expectations? Well, as always, we look at that here.

Matiss Karro: Following his hard fall at Lommel one week ago, you would have been forgiven for thinking that Matiss Karro may head into Cusses Gorse less than one hundred percent. However, he came out and quite simply took control of the championship, and left no doubt that he is the strongest MX2 rider. The Latvian has really shown how versatile he is in recent weeks, as he swept all three motos in the deep sand of FatCat, and then did the same on a track that was fast, hard-pack and jump laden this past weekend.

The fact that he had three good starts was a great help (and also a testament to how good the Wilvo Forkrent KTM bikes are), but in the final race he started behind Mel Pocock, his championship rival, and still past him – he made a big statement in that one.

Shaun Simpson: Well, to the surprise of no one, Shaun Simpson claimed the 2014 MX1 Maxxis British Championship title at Cusses Gorse and in the best way possible too, as he also took the overall win on the day. Despite the fact that he was inevitably going to lock up the championship in the second race, he still pushed for the win, as he wasted no time in getting past Kristian Whatley immediately. I am sure he did not want a repeat of the first race, where he sat behind the (now) former champ for the duration, hence the urgency. Will he be back to defend his crown next year? Well, in an exclusive interview  he stated that staying with his current team looks like the best option at the moment.

Kristian Whatley: Kristian Whatley has certainly had a run of good form over the last two weeks, which is hardly surprising, as the tracks have lent themselves to his style. Cusses Gorse was undoubtedly the best he has performed at the Maxxis British Championship this year, as he had not won a moto in the series before Sunday, so I am sure that it was nice to get that monkey off his back. Although he got past by Shaun early on in the second moto, he latched onto him and stayed right there for the whole race, so he certainly has the speed to contend for the overall win at the final round.

Graeme Irwin: Although it was a great day for Graeme Irwin, it unfortunately turned sour in the closing stages of moto three. After sticking with the leaders in moto two, Graeme got out to the early lead and started to runaway with moto three; it certainly seemed inevitable that he was going to clinch the win. However, a hard fall on one of the downhill jumps left him on the ground and in pain. Surprisingly, he got up and salvaged a sixth to finish third overall, which was his first visit to the overall podium this year. It was clear that he was not right though, and later he was taken an ambulance was called to take him to a nearby hospital. There is no update on his condition at this time.

Max Anstie: Things can change so quickly in this sport, as Max Anstie knows; he went from being a GP winner last week to failing to finish two of the motos at Cusses Gorse. In speaking to Steven Dixon after the race, it became apparent that the issues were consistent with what they have been dealing with all year and that there are no surprises there. Despite the issues, Max was still impressive, as he was the first MX2 rider to do the uphill quad when conditions were still a little slick. However, he (like many others) just struggled to make passes in moto one, hence why he ended in fourth.

Mel Pocock: Mel Pocock didn’t have a bad day at Cusses Gorse, he finished second overall! I am sure many riders would love to be in his position. However, it was not a great result for his title hopes, as he lost another sixteen points in the series standings and now sits thirty-nine back with one round remaining. There is more than a month until the final round, so a lot could change in that time, but Mel will need a bit of luck on his side at Foxhill. It is going to be interesting!

Nathan Watson: Unfortunately, a handful of riders were hindered by bad starts all day; Nathan Watson was one of them. The track was definitely tricky to pass on; hence why you did not see any riders make too much progress. However, Nathan did move forward each time and actually finished eighth in moto three after starting twenty-first, which is not bad at all. Although I am sure he would have liked to be battling for a spot on the podium, he made the best of the situation, which is what he needed to do. Although it is a long shot, he could also capture third in the series at the final round!