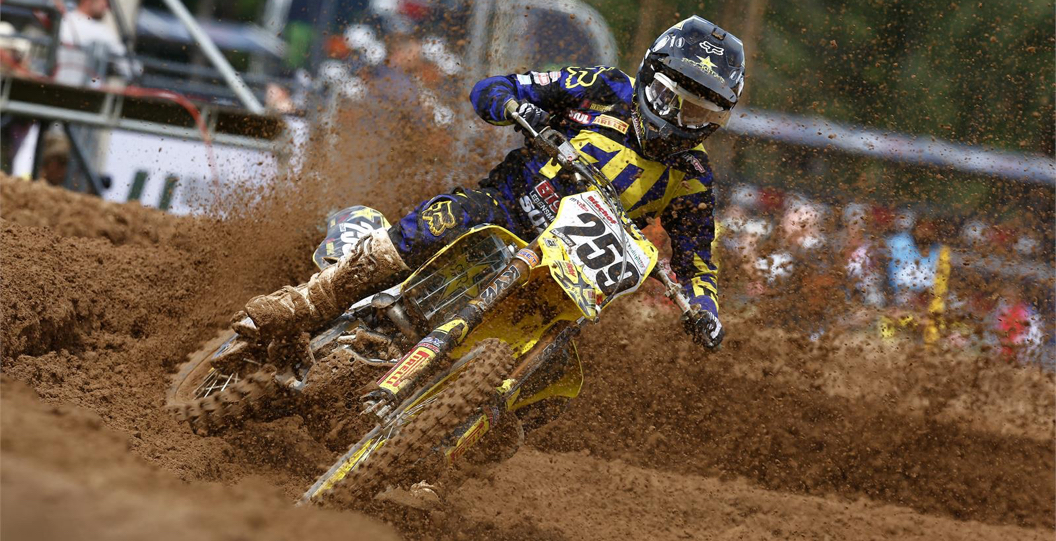 Hot and Cold: GP of Latvia

Glenn Coldenhoff: Although this has been a crazy year, I think I would put this down as the biggest surprise. Glenn Coldenhoff is obviously a very capable rider, and also a previous GP winner in MX2, but his recent form and results didn’t indicate that this was on the horizon. Prior to this weekend he had finished in the top five in just one moto all year, and had spent a majority of his time around ninth.

For whatever reason (he did mention that he always performs well at Kegums, but there is never usually this giant leap up), he came alive at round twelve and has now handed Suzuki their sole win of the year. Will he keep this up? I doubt it, but confidence is a powerful thing so I’d expect him to improve on previous performances. Coldenhoff has also been linked to various ‘B teams’ for next year, so I’m sure this performance would have raised his asking price and maybe chucked his name into the discussions for a factory spot.

Max Anstie: For weeks I have been asking what would happen if Max Anstie got good starts consistently. Well, we have our answer – he goes 1-1. Honestly, he was the man to beat in the sand and it was only a bad start which could have stopped him from standing atop the podium for the second time in his career. That wasn’t an issue though; he even holeshot moto two! He had the fastest lap of both motos, by a considerable margin, also. Confidence massively impacts starts, so perhaps this starts a run where he gets out of the gate consistently?

Romain Febvre: I elected to put Romain under ‘Hot’ rather than Gautier Paulin, why? Paulin should have won, really, based on his Saturday performance. Anyway, I had two questions about Febvre prior to this weekend and they were both answered…

It turns out that he is just as good on the soft stuff! Admittedly Kegums isn’t in the same league as Lommel, but it was still gnarly! His practice times were cause for concern, but he came to play in the qualifying heat and then obviously won race two on race day. Aside from Lommel, none of the upcoming tracks are going to be deeper than Kegums. For that reason, he should be okay…

Again, no worries here! The first turn crash in moto one could have caused things to go south, especially when the bike wouldn’t start. He showed some frustration, but once he got going he remained level headed, picked some guys off and didn’t make any more mistakes. What else does he have left to prove?

Pauls Jonass: The support of a home crowd can always spur a rider on, as we saw with Pauls this past weekend. He hasn’t been on the podium since the flyaway races at the start of the year, and was obviously a bit beaten up after that horrifying crash in Sweden. He managed to go 2-2 in his homeland, however. I’m sure he is a little disappointed he didn’t win moto one, but it wasn’t surprising. We have seen him run up front and then drop off towards the end many times this year; I doubt that issue will be resurrected until he has another full off-season under his belt.

Tyla Rattray: In his final season of racing, it looked like Kegums could be a turning point for Tyla Rattray. Valkenswaard was his best race this year, so the sand is clearly where he comes alive; this was proven to be true on the Saturday in Latvia too. However, a fall in the first turn of moto one left him with a broken bone in his thumb. Whether this will rule him out or not in the coming weeks remains to be seen, but it was the reason for his second moto DNF.

Jordi Tixier: I feel like I’m saying the same thing each week, but what is it going to take for Jordi Tixier to put himself in a position to win? Once the opportunity is there, he just doesn’t seem like the same guy and makes one too many mistakes. But, when Herlings is present and the win is unlikely, he is a solid second or third place guy. Pressure and confidence have always been a big factor with the Frenchman, so maybe that number one plate is a little heavy. I’m sure his team never imagined that they wouldn’t have a GP win from him at this stage of the year…

Valentin Guillod: Guillod hasn’t had a weekend this bad in a while, which perhaps indicates he isn’t yet the full package. The track didn’t suit his style, he said as much; “in those conditions you have to clutch-it a lot and ride on high rpm and that’s not really my style.” He had a good start in moto two but crashed on lap one, and then had another incident later on which knocked him out of the top ten for the second time that day. He’ll be back at the front at Loket in two weeks.

Tim Gajser: You could call this a missed opportunity for Tim Gajser, but looking at his results in the sand it isn’t exactly surprising. The Gariboldi Honda rider could have got Herlings’ lead down to twenty-eight points, but instead it currently sits at forty-six. A crash in turn one of moto one obviously didn’t help him, but he pulled through to salvage a respectable amount of points. You have to question whether he should have done more though. Surely he could have beaten Kullas in the second moto?