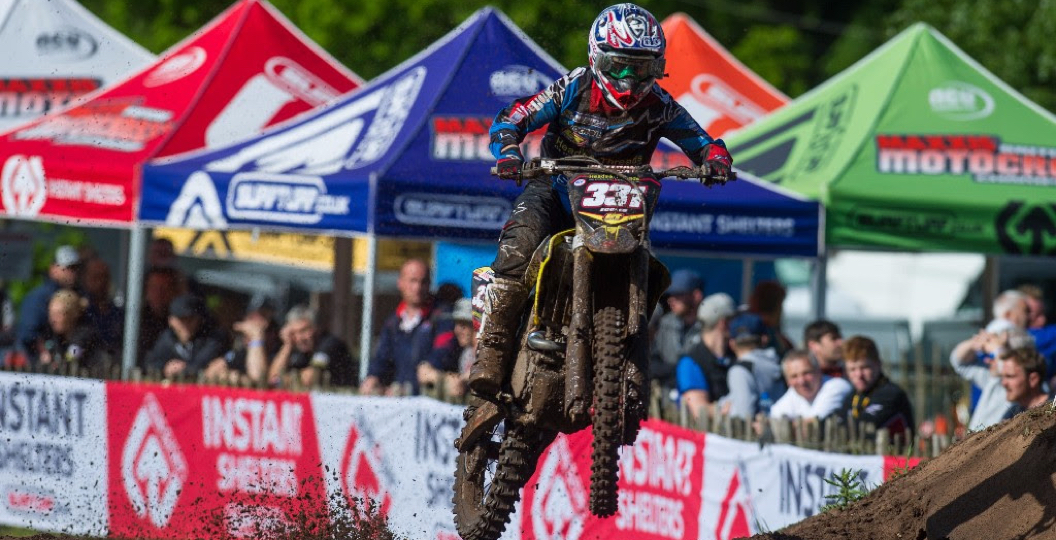 Highs and lows for Suzuki

It was the third round of the prestigious Maxxis British Championship at Hawkstone Park yesterday. The Heads & All Threads squad were looking forward to riding at one of the most challenging tracks on the calendar. Track conditions were ideal even after heavy rain Saturday afternoon/evening.

The first MX2 race of the day saw rookie Jordan Eccles and the experienced Neville Bradshaw both get disappointing starts. Neville pushed throughout, but struggled to find enough speed to pass through the pack. He did, however, climb to twelfth by the finish flag. Jordan finally showed his speed and determination on the track, and was making good progress until a crash at the top of the infamous Hawkstone Hill stopped him in his tracks.  Undeterred Jordan continued to push to the end of the moto.

MX1 race one for Josh Spinks didn’t go to plan; his start saw him towards the back of the pack. It was a steady ride after a big crash in qualifying. A small mistake cost him and he finished just in the points in twentieth position.

Looking to improve in race two, Bradshaw and Eccles got a better gate. A rider stopped in front of them in the second corner though, pushing them both to the back. Bradshaw fought through to move up to eleventh by the end of the race and Eccles showed true grit by continuing to push hard, which paid off resulting in his first MX2 points. He came home in nineteenth, even after a small crash.

Race two for Josh Spinks saw him start mid-pack, but an impressive first lap saw him pass many riders rising to twelfth. Unfortunately a big crash ended his day with the bike too damaged to continue; he was very lucky to come away with no major injuries and just battered, bruised and burnt from the exhaust.

All three riders were suffering lack of energy this weekend and have been advised by team manager Neil Prince to try to rest this week in preparation for the next event this coming weekend in Duns, Scotland.

Neil Prince (Team Manager): “First of all Jordan did very very well at the weekend, for the past few weeks he has been battling a virus and found out today it is glandular fever. He is having to rest; he only rode once last week. His goal was to score points, which he did in the second moto. We now need to move forward after a good day together. Both Neville and I had high expectations for this weekend, but starts let us down and our main aim is to work on getting the bike out of the gate in every race to stand a chance.

“Neville was also lacking energy on Sunday, but still managed two consistent rides but had hoped for better results. We were also hoping for improvements with Josh but with him also not feeling well, it was a steady first race and a massive crash ended his second moto. Luckily mostly bike damage was sustained, but this pretty much summed up the weekend.  The riders now need to get healthy to improve their results”

Jordan Eccles: “Sunday was a big, big step in the right direction for me. I still know I can get better results than this weekend, but finally I had two strong races and enjoyed being on the bike. Having glandular fever for four weeks really set me back with bike fitness and physical fitness. I dug deep and fought till the end. I’m looking forward to round four in Northern Ireland and am hoping to carry the momentum into the next five rounds.”

Neville Bradshaw: “Hawkstone was a really tough day for me. I gave my best effort in both races to come away with a twelfth and an eleventh.  I felt really flat and just had no energy on the bike.  Thanks to the team for sticking behind me. I’m working on rectifying the issue to come back strong at Desertmartin and the remaining five British Championship rounds.”

Josh Spinks: “Really tough day for me at Hawkstone. I didn’t feel very well late Saturday with a sore throat and mouth ulcers. I woke up Sunday feeling ok, but soon realised in qualifying I wasn’t myself with a big crash early on. I managed a qualifying lap to place fourteenth.  Race one was a good jump out the gate, but I got swallowed up going up the straight and didn’t ride very well with a small crash ending twentieth.

“Race two, I just wanted to give it everything I had at the start of the race and came from mid pack to twelfth in just over a lap. I then made a big mistake and ended up damaging the bike too much to carry on – that was my day finished.  I hope to bounce back and show what I can do from now.”