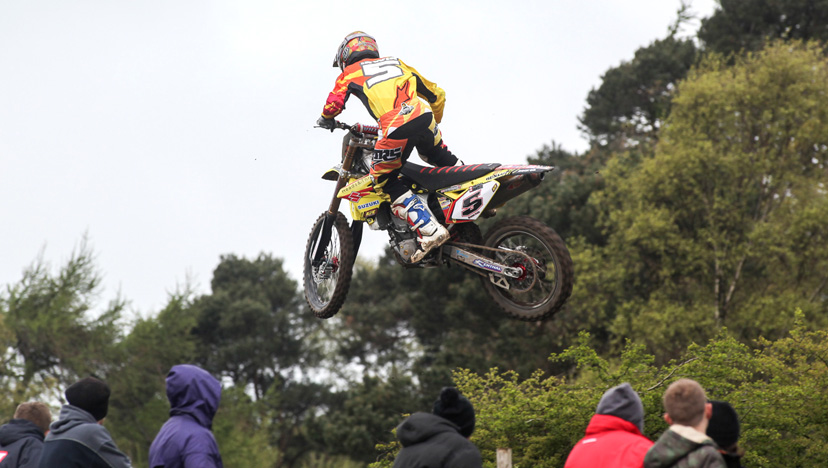 Gamble pays off for Heads & All Threads

With a man down, Heads & All Threads Suzuki took advantage of the change in format at the third round of the MX Nationals at Whitby this bank holiday weekend by registering star rider Graeme Irwin for the MX2 class as well. Sunny weather greeted riders and spectators on Saturday; although Sunday started with morning showers and subsequent dark clouds on the horizon, the weather held off for some spectacular racing.

Much to the team’s consternation, MX2 rider Luke Burton had a torrid time with electrical issues that plagued both his bikes and forced him to sit out much of the weekend. Although he had qualified in seventeenth, his first race ended before it even started properly. After taking apart all systems, checking them and putting them back together, practice runs showed no issues, only for them to re-appear during practice on Sunday morning.

On the other hand, Irwin went from strength to strength. After taking pole in the MX2 class, he hopped on the waiting RM-Z450 and promptly qualified second in the MX1 class. This would be the format for the remainder of the weekend’s racing too.

The first MX2 race started with Irwin in hot pursuit in third. Halfway in, he made his move to take the lead and finish by just over four seconds ahead. The second race of the weekend didn’t get off the start that well, but despite that, Irwin ended second. The final race was arguably the worst. Coming off in the pit lane corner, Irwin scrambled to remount, only to be run over by another rider. Although he quickly made progress again, the battle for the top five was lost and he decided to save his energy for the subsequent MX1 race. Despite the DNF, Irwin still scored a fifth overall on the weekend.

In the MX1 class, Irwin didn’t quite get the first race start he wanted and found himself working hard to not let the leaders get away. With just seconds left on the clock, he returned to second, with leader Kristian Whatley but a few bike lengths ahead. Time ran out and he had to make do with his runner-up position. In the second race, he was embroiled in a battle for sixth for much of the race before making progress to end fourth and the leaders just seconds in front of him. The final race of the weekend promised to be another good race. Off the start in third, Irwin ran a steady race before being challenged for his position. Deciding that it was best to concede rather than make more mistakes, he finished fourth for a fourth overall on the weekend.

“It’s been a tough weekend. With Luke’s bike we’ve had electrical problems, even now at the end of the day, we can’t put our finger on it, and it’s made it impossible for Luke to ride this weekend. We’ll go back to the workshop and try to find the problem there. Graeme’s had a fantastic weekend really, he showed good speed from the word go, he decided to do the MX2 class as well as MX1, it’s possible to do it, but this weekend he got a little bit tired in the last race. He also took a big hit when he lost the front end and another rider hit him square-on in the chest. That hampered him for that race a little bit and he pulled out and did the last MX1 race. He took a big knock, but I’m happy with the race.” — Neil Prince, Team Manager

“The weekend went really good, in the MX2 I qualified first, MX1 I was second, which I was happy with to be honest. The MX2 bike is working really good and I think we have one of the fastest MX2 bikes out there. In the second MX2 race I had to work my way back from tenth, Lenoir had too big a gap on me, but I was happy with my riding. In the last MX2 race I went down on my own, and when I was getting back up, Matt Burrows hit me. It wasn’t his fault. Considering that I’m not in the championship, there was no point wasting the energy, so I just called that one a day.

“In the first MX1 race worked my way up through to second from an average start, but Whatley just had too big a gap for me to reel him back in. I was still happy with that, considering that I was doing back-to-back motos, which isn’t easy. In the second MX1 race I got a fourth, the guys were riding well, the lap times were all very close. I got a good start in the last one, I was racing my sixth race that weekend, I started feeling a bit tired, for five or six laps I was right on the front group, but there was not much I could do to catch them. Kristian got by me two thirds of the way through and I just rode a smart race to bring it home for fourth.” — Graeme Irwin, Pro #15