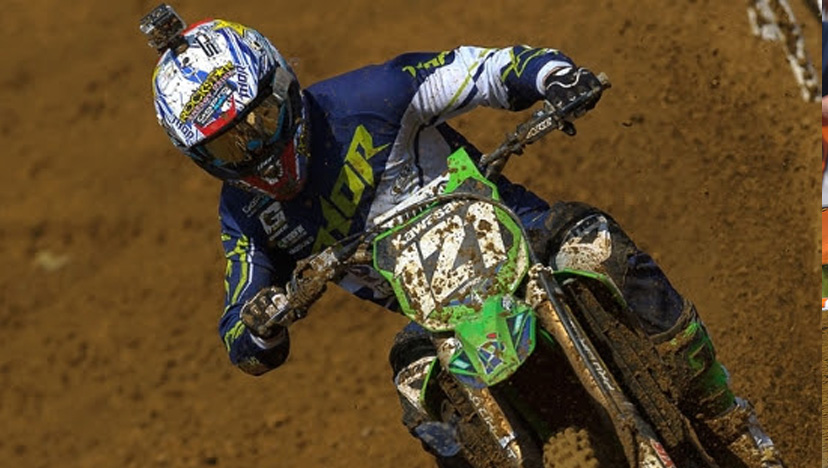 Road trip! That’s arguably the cry every Friday in Edinburgh when Pendrich Height Services Kawasaki gets ready to pack up to go racing. This weekend it was Canada Heights in Kent’s turn for the fourth round of the Maxxis British Motocross Championship. With scorching temperatures bringing out the sun worshippers and racing enthusiasts in their droves, the high temperatures also added an extra element of toughness for the competitors.

MX2 rider Bryan Mackenzie got a good time in during qualifying, but some of his rivals improved their times in the super-pole, pushing him down to eighth . MX1 rider Ross Rutherford was welcomed back too; his qualifying time wasn’t grand thanks to some teething issues in the session but for both riders the new start gate position at the venue gave a relatively equal opportunity to all.

Bryan likes Canada Heights and this time was no different. Some great starts saw him consistently hitting top three positions, but all was not perfect. Some arm pump in the first race forced him to take his time, which hampered his attack on the rider in front but brought home a solid 4th place finish, but the second race was arguably the most frustrating and annoying for him in a while. Whilst in third after a great hole shot, he stalled his bike nearing the end of the 20 minutes plus 2 laps and couldn’t quickly get it re-started. After that, it was too late to make any significant headway and away slipped the chance of a podium as he crossed the line 12th. The final race on the other hand was a complete reversal; a start in third turned into a chase after KTM rider Matiss Karro in the lead, with Bryan only a few seconds behind across the finish line in 2nd and a top five overall was his reward for the weekend.

Ross on the other hand was so tantalisingly close to getting into the top ten, but crashes ruined his results every time. The first start was one of his best of the season but a crash dropped him to seventeenth, where he struggled to make much headway, before another crash in the last lap ruined that result altogether – Nil points to Rutherford. Race two was the best effort of the day; there a good start put Ross squarely in eighth before he dropped the bike in a corner. A quick recovery saved him five points. The final race was over before it really began. Ross was off to another good start, only to lay the bike down in the same spot as the previous race. Then, to add insult to injury, he crashed into some chestnut fencing which cut his hand, putting him out of action for the remainder. Nil points again, for a twenty-fourth overall on the day.

Bryan: The track was really good today, they prepped it up real nice and it looked good this morning, so I was quite excited, I’m normally quite good around here. Qualifying wasn’t great, I was eighth, which I was disappointed with in the super-pole, but I got three good starts all day, I got the holeshot in the second one and that was the difference really this weekend. A fourth in the first race wasn’t too bad, I got a bit of arm pump but I was still in the hunt for the podium so I was pleased, the second race everyone was going good, I was in a podium spot and then stalled it! I couldn’t get it started again and finished a lowly twelfth or something. In the last race I got another good start and then managed to dig in and put some good times in, and finished second. All in all I think we’ve moved up in the championship today which ultimately is the end goal.

Ross: Today was good, today was the first race back at the Maxxis. In qualifying I struggled so bad, I had a few problems with the bike and myself, so it wasn’t too great. In the first race I got a real good start and yeah, I rode pretty well. I got some arm pump and came off with a lap to go. In the second I got another good start, which is not very common for me, I was riding real good and was mixing it up in the top ten and felt real comfy. Then I just had a stupid crash and that was that. In the last race, it was the same again, the bike hooked up real good again, got a good start and was in the mix again battling with top seven or eight guys. Then in the same corner as the second race, I had a stupid crash, got going again, made a few passes and then went through the chestnut fence and hurt my hand and that was the end of the day. The results weren’t there, but my riding was really good and my starts were a lot better than normal and I’m really happy with that. Thanks to all the guys in the team who help me out, I appreciate it.