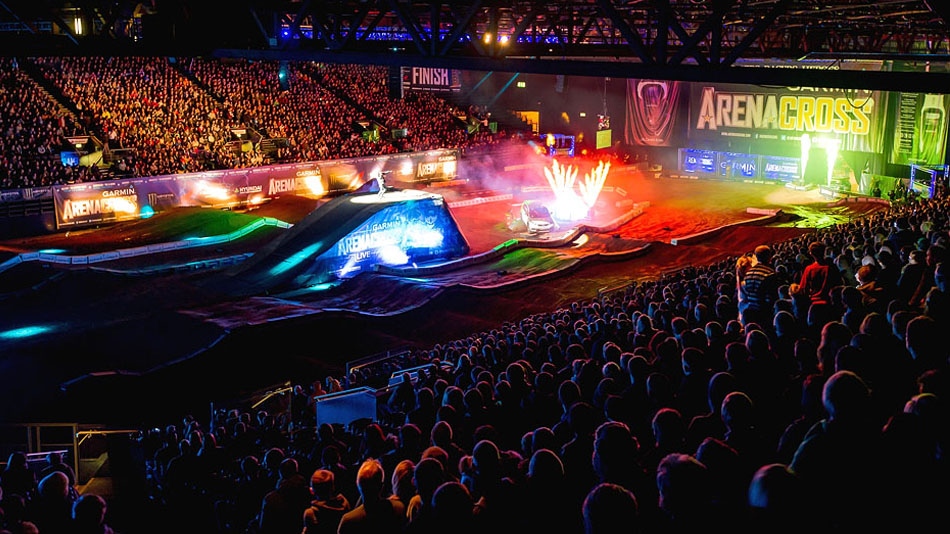 With massive momentum behind us built on the back of three amazing opening rounds, the 2014 Garmin Arenacross Tour steams into Liverpool’s Echo Arena on Sunday (February 2) for a special matinee afternoon show!

“That last race [at the LG Arena] was crazy,” says Fabien. “I got a good start but had to wait to pass McCoy because the track was very slippery. When I passed him he tried to pass me back in the next corner but I stayed in first position. It’s been a great night for the team and for me.

“The track was really hardpack and I prefer these conditions because it is more like my home. I’m very confident for sure but there are many very fast riders – the key is to make a fast start and not mistakes. For the moment I hold the key and I hope to keep it for the next race in Liverpool and for the season.”

Second on the night at the LG Arena and second in the series, McCoy led last Saturday’s Main Event until just a few laps from home.

“I got the holeshot and then led for the majority of the race but I struggled a bit with the slippery conditions and Izoird seemed to capitalise on that,” says Daniel. “But it was a good race overall and to be on the podium is great. I’m really enjoying Arenacross, it’s definitely a lot different to racing at home – tighter tracks and action-packed for sure!”

In 2013 the Echo Arena round was a sell-out success and with Izoird and McCoy being chased by the likes of Kristian Whatley (MBO Sport ASA Yamaha) plus Steven Clarke (Dyer & Butler KTM), Elliott Banks-Browne (Buildbase Honda) and Frenchmen Loic Rombaut  (LPE Racing Kawasaki) and Cyrille Coulon (SR75-Molson Suzuki) the racing is guaranteed to be electric.

Chuck in five top Freestyle Motocross riders led by Edgar Torronteras and 46 of the UK’s top youth racers – plus South African brothers Marcus and Nicholas Phelps – and all the ingredients are in place for an action-packed afternoon.

The Echo Arena is a special Sunday matinee event with the show kicking off at 2pm. For more information go to www.arenacrossuk.com

Tickets starting at £10 for children and £19 for adults (plus venue and booking fees) can be bought at the Echo box office on the day, from www.theticketfactory.com or by calling 0844 338 8000