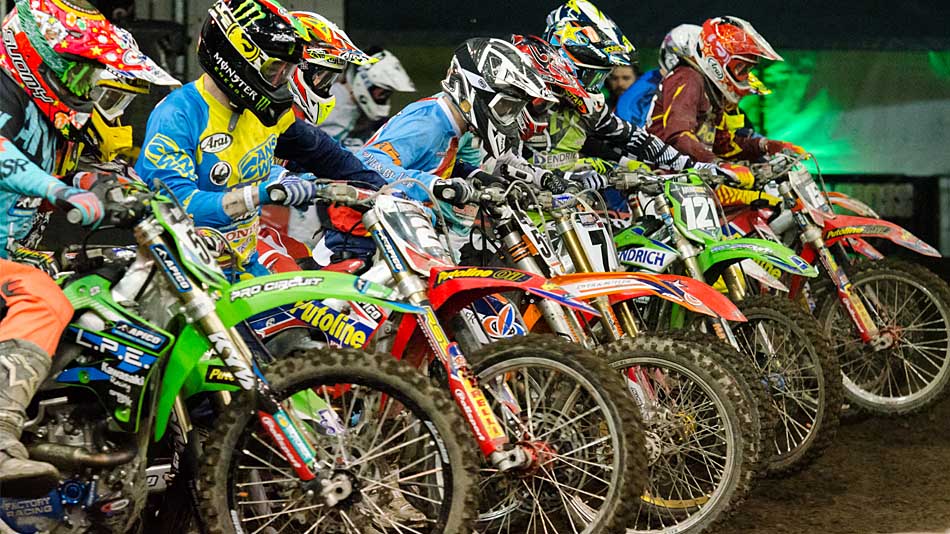 After the all the drama of Belfast, the arenacross circus has moved to Birmingham just one week later for round three of the championship.

Frenchman Fabien Izoird leads the series by just one point over Steven Clarke and these two will be out to win again in Birmingham in a bid to take the momentum in the series.

But Izoird isn’t getting carried away stating: “I would like to stay focused on riding like I am at home. I need to have good starts, no mistakes and finish with good points every time to win the championship.”

Clarke meanwhile felt he should have won both races in Belfast and is determined to win in front of his home crowd tonight:  “I’m healthy and it’s on to my home round next week in Birmingham so I will have a lot friends and family there cheering me on and hopefully I can take the points lead back.”

Daniel McCoy is third in the series and after looking sketchy on the Friday, McCoy really started to show his form on Saturday. The Aussie is ultra aggressive and loves the head to head racing too. Keep your eye on McCoy tonight because something exciting usually happens when he is on the track.

Loic Rombaut is lurking in fourth in the series and could be a threat tonight. The LPE Kawasaki rider is similar to Izoird and will be there for the long haul.

Cyrille Coulon still managed to come away from the first two rounds fifth the championship despite problems on both nights. Coulon is very fast and could well be one of the contenders for the win if he can finally get out of the gate.

The man who should have won in Belfast was Kristian Whatley. The MBO Yamaha man has adapted quickly to arenacross but he got a little bit of experience in Belfast when it comes to the importance of starts and making good decisions. If Whatley has learnt he could well be the man to beat.

With harder dirt expected in Birmingham expect Tyler Villopoto to show more of what he is capable of. More testing by the Oakleaf Kawasaki team was obviously needed but Villopoto and the team will be confident of a major turnaround tonight.

Neville Bradshaw is another guy who will want to get the moment rolling. The Putoline Honda rider is fast but desperately needs a start in the main to show everyone what he has.

Elliott Banks-Browne was impressive in Belfast and he nabbed a podium on Saturday night. EBB said he wasn’t overly happy with his riding however saying: “I feel like I am riding within myself and not being aggressive enough.” Expect a more aggressive and confident Banks- Browne tonight now he has got his feet wet in arenacross.

The biggest difference this weekend will be the track. After the soft, rutted conditions of Belfast the riders are now faced with the more hard packed dirt in Birmingham. The riders who can adapt the best to the change could the guys to beat.

And with qualifying seeing EBB go quickest from McCoy and Izoird, but all within the same tenth of a second, you can tell the racing will be ultra close tonight!

So it’s still all to play for in the Garmin Arenacross series with all the title contenders believing it’s their time to win and the guys who didn’t have a great time in Belfast out to prove their worth.

It’s going to be exciting!