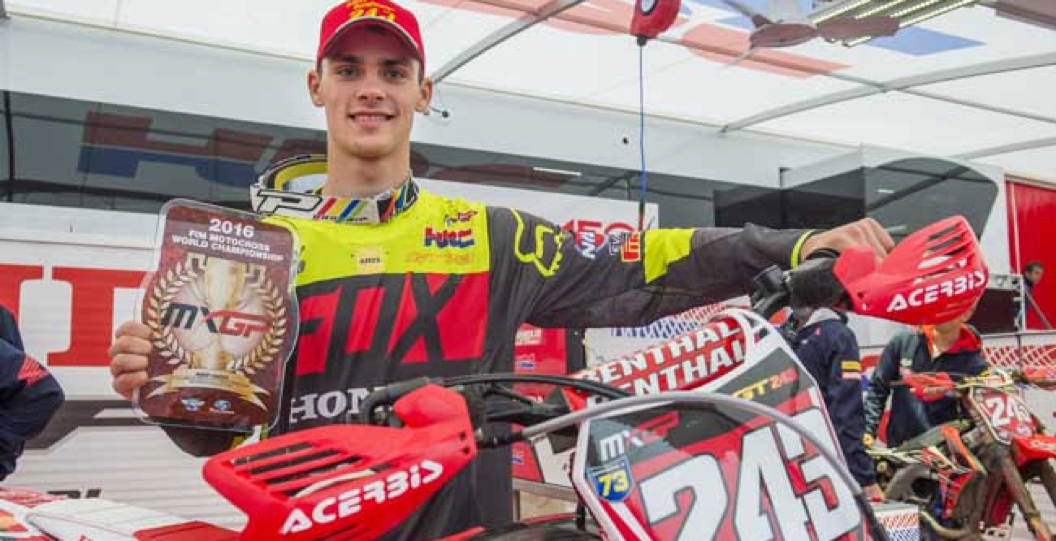 Tim Gajser rode a masterful pair of races at the MXGP of Great Britain today in changeable conditions, chalking up another perfect weekend. The Slovenian won the qualifying race yesterday and both motos today (meaning he’s now won 11 motos this season) to extend his championship lead to seventy-four points.

In race one Gajser made his mark but only after coming from behind and chasing down fellow Honda rider Evgeny Bobryshev who had built an early lead. Tim slotted into fifth from the start and swiftly moved into fourth on lap one. Five minutes later he passed Cairoli for third, but he had to work harder to pass Guillod for second. At half distance he made his move and set about chasing down Bobby, who was six seconds up the road. Setting fastest lap after fastest lap, he passed the Russian #777 with six minutes remaining to take the first of the day’s victories.

In race two, Tim also cut his way through the field from fourth at the start. The morning’s sun gave way to rain and the temperature dropped markedly, but it didn’t hold the Slovenian up as he chased down Max Nagl, setting the fastest lap of the race again, to take the lead from the midway point.

Tim Gajser: “I’m so happy to win again; it’s such a great feeling! I love this track and I was really enjoying it a lot. The second race was a little sketchy with the rain because the track got really slippery and it was difficult for visibility, but I really enjoyed my riding today – having fun with some nice scrubs and whips. In the past races I was in a rush at the beginning and made some stupid mistakes, but I’m really happy that this weekend I could ride more smart and take another pair of wins for the overall.”

Jorge Zaragoza: “We had some very good starts today, into third in the second race, so with these I am pleased. The second race was pretty good for me because I could finish eighth after starting well, but race one was disappointing. Still, we take the positives and move on. Race two was really tricky with the weather and the track was very slippery, so I am pleased we could make a consistent race to be in the top ten.”

Giacomo Gariboldi: “As Tim says, he rode very cleverly this weekend in conditions, especially in race two, that could easily catch riders out as we saw with some others. He’s just so calm and relaxed and riding so well, and is still always learning and taking things in which is why he just keeps getting better and better. Next we go to really his home race in Mantova, which is the closest round to Slovenia, so I’m expecting even more fans to come out and support him because he is just growing and growing each race.”