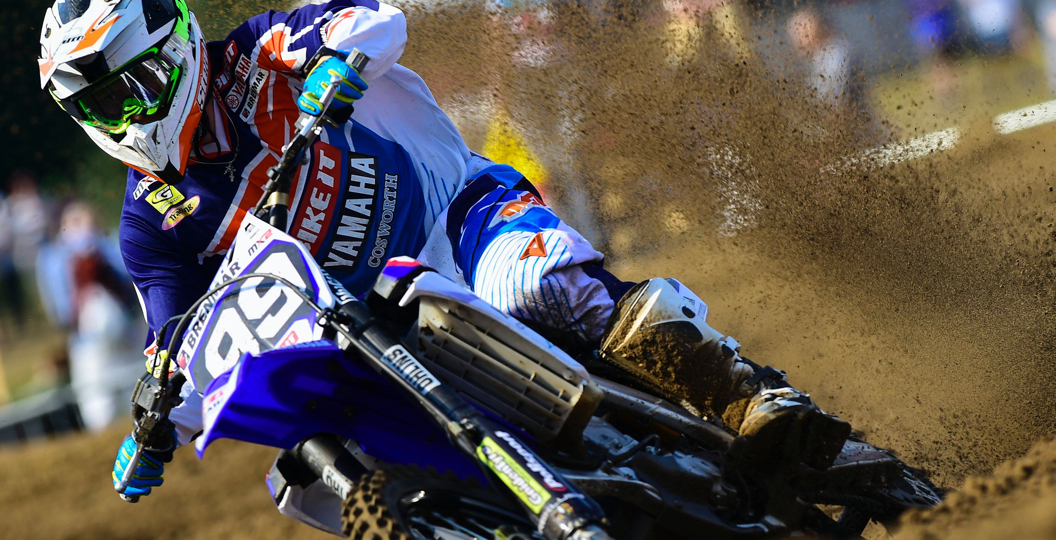 The 2014 Grand Prix of Belgium in the hot sand of Lommel represented a milestone in the career of Bike it Yamaha Cosworth’s Max Anstie with a first career victory in the MX2 category and a first for the new YZ250F since the 2014 model reworked one of the defining models of the racing class.

Twenty-one thousand spectators at the fifteenth round of seventeen in the FIM Motocross World Championship saw the young and talented Briton ride to first and second positions through the technical sand and post a remarkable success for the UK squad who have been buried deep into a development programme this season. Anstie’s triumph was the first of a set of notable results for Yamaha technology in Belgium. Nick Kouwenberg used his YZ250F to win the second race of the EMX250 European Championship while Sweden’s Alvin Ostlund dominated the last fixture in the EMX125 series with the able YZ125 two-stroke.

It was Anstie who made headlines after a difficult 2014 term. The Yamaha man signalled his intentions on Saturday with a determined first Pole Position and then survived moments of drama such as the late starting of his racebike in the gate for the first moto and crashing while fighting for the lead in the second outing. The Lommel sand was typically tough and draining and was the usual hard test for both the athlete and the motorcycle. It was an acute stage of demands for the performance and reliability of Yamaha’s machinery and the bikes shone in more than one division.

In the final round of seven in the EMX125 European Championship Alvin Ostlund was ruthless. The Swedish ace claimed both motos on his YZ125 and finished a strong runner-up in the series. David Herbreteau was fourth in the standings for a pair of two-stroke YZ125s in the top five while Kemea Yamaha’s Cyril Genot posted a season-best at Lommel and was fourth overall, just one point shy of the podium.

Lommel was also the last chapter for EMX250. The competition represents the final stepping stone to Grand Prix in the European Championship ‘pyramid’ and Dutchman Nick Kouwenberg was irrepressible on the YZ250F in the second moto to take his second chequered flag of the year.

Back in MX2 and Yamaha Factory Racing’s Christophe Charlier had a difficult day in the sand. An early fall in the first moto meant he was far behind the pack and had to push for the entire race duration to arrive to seventeenth spot and bag four points. In the second race he again hit the floor. He was twentieth overall and had to write-off the Grand Prix as simply ‘one to forget’.

Kemea Yamaha’s Petar Petrov was sceptical of his possibilities at Lommel. The Bulgarian came into the race doubting his fitness after separating his shoulder less than two weeks beforehand and having sat out the previous round in the Czech Republic. Petrov came through the Saturday qualification heat and then rode to a brave eleventh place in the first moto, complaining of a lack of strength in his joint but still producing the speed around the circuit that he describes as his ‘local track’. In the second moto he managed to break into the top ten and was ninth, just in front of Glenn Coldenhoff.

The Grand Prix of Belgium was the last major international motocross fixture in Europe. The final two events of the FIM MXGP term will take place in South America on the first two weekends of September.

Max Anstie: “We didn’t make things easy for ourselves but everyone has worked so hard. From where we started at the beginning of the year the thoughts going through my head today were ‘I have to finish the job I started in Qatar with the ’13 YZ250F’. I said to the guys in Czech Republic that if we had a good Saturday here then we would put ourselves in the position for a good finish and we did that. It is amazing to see the effort that has been put in, and this is the day that we lived for. Before that second race I was thinking ‘this is what I am here for’ and I was nervous..but we got it done. It was a very difficult race and this track is obviously the hardest both on the bike and also physically of the year. I’m over-the-moon but I don’t think it has really hit me yet.”

Christophe Charlier: “I’m not sure what to say; the whole weekend hasn’t been a good one and from my crash on Saturday I just did not have a good feeling in this sand. The results were not good and the riding also. Too many mistakes and I just have to look ahead.”

Petar Petrov: “Looking at the fact all the doctors told me I wouldn’t be able to race here I’m quite satisfied. This isn’t the result I was looking for but with the injury I’m happy I could finish both races and finish tenth overall. Now I have some time to heal up and I hope to be 100% for Brazil and Mexico. I really want to thank Yves Demeulemeester and Dr Claes for their help. They helped me a lot to get me on the bike this weekend and I’m really thankful for that.”

Nick Kouwenberg: “At least I could save my weekend with the second race… On Saturday things were going well and I was riding in third place when I got some issues and fell back to seventh place. On Sunday I was at the front from start to finish and rode a good race. In the end I’m missing just one point for the podium and that was my goal. So I can’t say I’m happy of my weekend. I had hoped for more but I can’t thank the team enough for supporting me.”