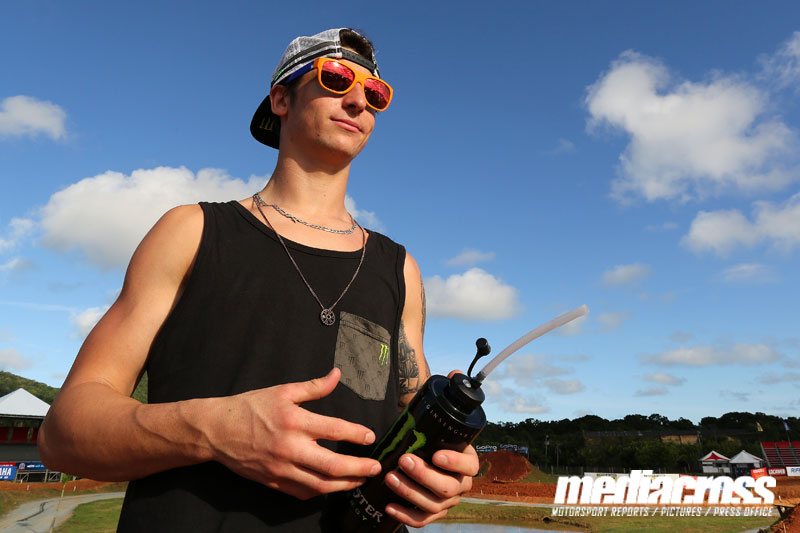 Currently runner up in the FIM MX2 World Championship, Dylan Ferrandis impressed by his results so far, clinching three podiums in the four races he entered this season. Winner of the opening MX2 race in Qatar, and again winner of the MX2 Qualifying race in Thailand, the CLS Kawasaki Monster Energy rider will be again a podium contender this weekend in Brazil.

Racing some selected Grand Prix in 2011 with team Bud, Dylan enters this year his third season in the World Championship, with already three podiums on his scoreboard (3rd in Sweden 2012, 2nd in France and Lierop 2013). And the nineteen years old kid from Avignon had a tremendous start of campaign in Qatar four weeks ago, winning the first heat of the season and scoring his fourth GP podium. “Qatar is a great memory of course, but I didn’t enjoyed the podium ceremony as I had a lot of pain; I don’t know what did they put on the track, but I got dirt in the eyes and during two hours I couldn’t see anything” said Dylan who beats again reigning champion Jeffrey Herlings in Thailand, during the qualifying race. “It’s a shame that we had troubles with the fuel on Sunday, as neither Arnaud (Tonus) or I could race in front. The first two GP’s were a little bit special, Qatar because there’s always some pressure and excitement at the first GP, and Thailand because of these technical troubles. I’m looking forward to Brazil, and last week we had a good training in the French series” he continued.

As he only got three podiums in the past, not so many people were expecting such a great start of season for Dylan. But the French kid is not surprised at all by his performances. “For the first time since a while I’ve been able to train normally this winter, as I had no injuries last year. That’s a huge difference, and I worked hard to be ready for this season. For sure I can understand that it seems strange for some people to see me fighting for the win as last year I was racing for a top ten or a top eight, except in France and Holland. This year I want to race for the win every weekend, and I know that I have also the material to do it; we have a very good bike with great suspensions and engine. The first time I tested this bike I felt the difference, my previous bike was good but now I’m in the CLS Kawasaki Monster Energy team and they have the support of the factory, I can feel the difference “ added Dylan. The French kid is determinate to win, and just came to Brazil to try to win his first GP. “Since the beginning of the season I always had good starts, and we proved already that Jeffrey isn’t unbeatable, even if he has been so far a little bit lucky; he had no technical troubles in Thailand and won already three motos, but I’m sure that Arnaud (Tonus) and I can beat him regularly. I come to Brazil to win” said the Monster Energy athlete who didn’t know when he left France that Herlings will not be racing in Brazil.

Jean Jacques Luisetti, the team owner is of course very enthusiast as Dylan and Arnaud are both in the top five of the World Championship. “I’m very happy to see both Dylan and Arnaud finishing heats in the top three. In Thailand both suffered with the fuel problem, and we are doing some tests to understand what happened for them and Tommy. For sure the best moment so far was the heat win of Dylan during the first race of the season in Qatar, and I want to dedicate this win to Mitch Payton who helped the team to be where he is today. With Dylan and Arnaud I’m convinced that we have the best riders to contest Jeffrey Herling’s domination.”