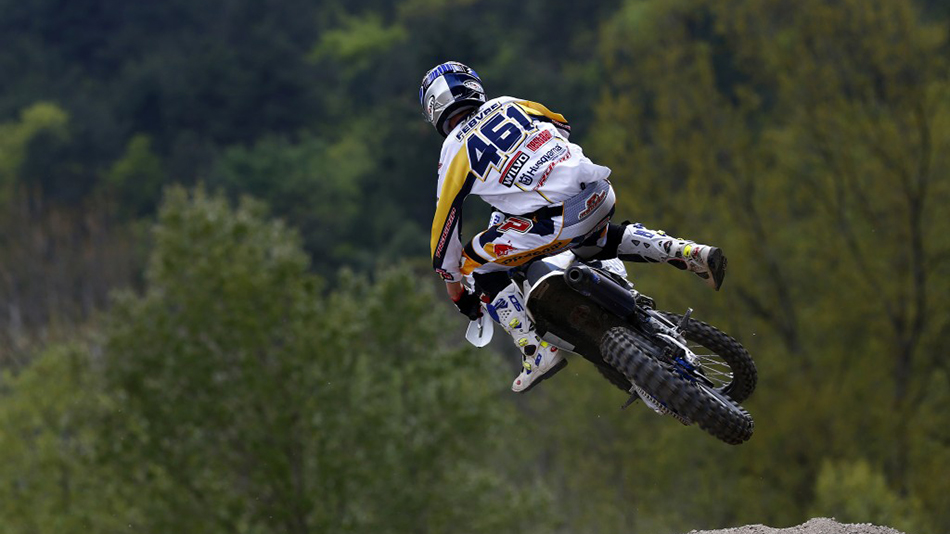 Romain Febvre has delivered Husqvarna’s best performance in the highly competitive MX2 class at round four of the Motocross World Championship. Securing an impressive runner-up result in Saturday’s MX2 qualification, the Frenchman hoped to translate that into a podium result. Hampered by a few mistakes in race one he finished seventh. Febvre then ran as high as third during the first six laps of race two before slipping back to an eventual fifth.

For Aleksandr Tonkov, the GP of Trentino was one of mixed fortunes. Qualifying 35th, the Russian got a perfect start from an outside gate position to round the first corner in the opening moto inside the top five. Tangling with another rider only moments later dropped him back to 21st. Pushing hard, Tonkov recovered to finish 14th. Determined to fair better in race two, he again started strongly to end lap one fighting for a top ten result. Working his way into eighth on lap three, Tonkov remained there for the duration of the race.

In the MXGP category it was Todd Waters that recorded the best result for Red Bull IceOne Husqvarna Factory Racing. Despite the hard packed, stony conditions not favouring the young Australian, Waters delivered a 14th place result in race one. Fairing better off the start in race two he soon found himself inside the top ten. Involved in a four-rider battle, Waters narrowly missed out on a top six result to finish seventh. He ended the GP of Trentino 10th overall.

Returning to competitive action following his recent injury, Tyla Rattray’s primary focus was to get some race miles under his belt. Tenth at the end of lap one in moto one, his chances of a strong result slipped away when he crashed during the early stages of the race. Dropping outside the top 20, Rattray fought his way back to 16th scoring his first championship points of the season. In the second moto Tyla placed 21st.

The FIM Motocross World Championship continues with round five in Sevlievo, Bulgaria on April 20.

Romain Febvre: “Finishing second in qualification was a big confidence boost for me. I knew my speed was good for a top three result but early in race one I got arm pump and that slowed my progress. Race two was much better and I held third position for about six laps. Unfortunately Herlings and Tonus got passed me but I hung on to take fifth.”

Aleksandr Tonkov: “It’s been an up and down weekend for me. I felt great in practice but I had some problems in qualification and only finished 35th. That gave me a bad gate pick but in the first race I got a perfect start and was eighth until I tangled with another rider and broke my foot peg. In the end I finished 14th. In race two my start was really good and although I crashed once during the race I finished eighth. Overall I’m not too happy with my results but I’m pleased with my speed. Hopefully next weekend in Bulgaria will be better.”

Todd Waters: “That was one of the toughest tracks I’ve ridden in a very long time. It took a while to feel comfortable on it. Race one didn’t go great. I fell off on the first lap and then had a bit of work to do to finish 14th. I was more determined for race two and just got on with the conditions. That made the difference – I rode a lot better and I almost finished sixth.”

Tyla Rattray: “I only rode my bike three times before this race so I didn’t know where I’d fit in. I was lacking bike time and my right hand quickly blistered up. It was hard to hold on but I dug deep to get my two finishes. My speed isn’t where I know it should be yet but that will come with time – it was just nice to be behind a starting gate again. With this race now behind me I’ve got something to build on for next weekend in Bulgaria.”

Standings – Motocross World Championship 2014 (After Round 4)