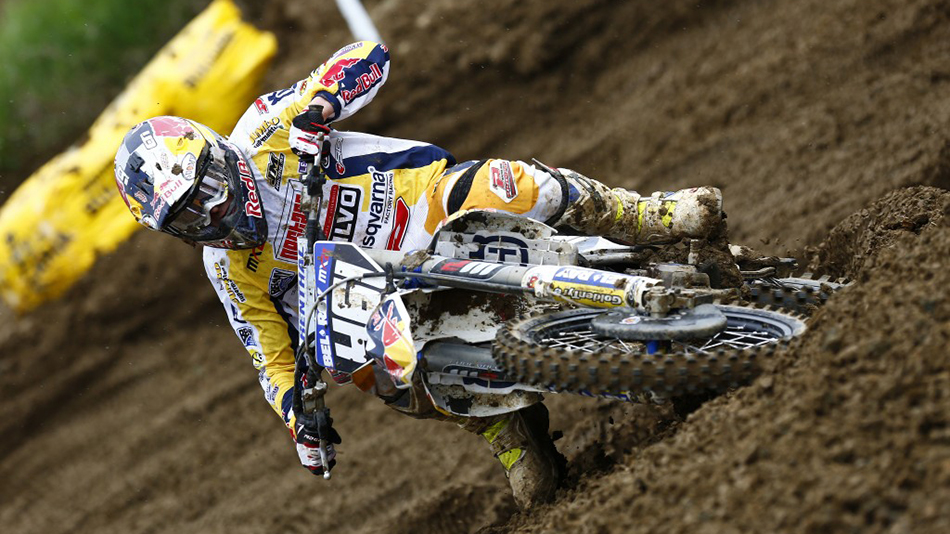 Scoring a season’s best of sixth overall in the MXGP category, Red Bull IceOne Husqvarna Factory Racing’s Tyla Rattray had a highly productive MXGP of Bulgaria. Despite a bad start in race one, Rattray, who continues to recover from a pre-season finger injury, steadily worked his way inside the top ten. Delivering a fast pace throughout the moto on his FC 350, the Husqvarna rider eventually finished eighth. With conditions deteriorating in race two due to the heavy rain, Rattray recorded his best race result of the season. Starting inside the top ten, he pushed hard to end the race in sixth position.

Struggling to find his form in race one, Todd Waters was unable to fair any better than 16th. But with the heavy rain turning the track into a mud bath in the second moto the Australian picked up his pace. Fighting his way from 15th up to sixth position, Waters looked set to secure his best result of the season until another rider collided with him resulting in a costly crash. Caked in mud, Waters slipped outside the top ten. Determined to finish the race on a high he battled his way back to eighth for 12th overall.

In the MX2 class, Frenchman Romain Febvre continued to deliver Husqvarna Motorcycles best result. Qualifying in a highly impressive third place, the Wilvo Nestaan Husqvarna Factory Racing rider grabbed the all-important holeshot in race one. Fighting hard at the sharp end of the field, Febvre crossed the finish line in fifth. With rain falling in race two, Febvre was again fastest out of the gate as he claimed his second holeshot at the MXGP of Bulgaria. Holding third position for the majority of the race, Febvre was on course to record his second podium result of the season until the slippery conditions saw him crash with two laps to go. Remounting to finish the race in sixth, he ended his day in fifth overall.

For Aleksandr Tonkov, his MXGP of Bulgaria was one of mixed fortunes. Enjoying a race long battle for a top ten result in race one, the Russian eventually placed 10th. Victim of a first corner crash in race two, the Husqvarna rider spent the duration of the race fighting his way forward. Despite the increasingly difficult conditions he carved his way through the pack to finish ninth and end his GP in ninth overall.

The FIM Motocross World Championship continues with round six in Valkenswaard in The Netherlands on May 4th.

Tyla Rattray: “I’m really pleased with how things have gone this weekend. I feel like I’ve made a step in the right direction. Race one was going really well. I didn’t get the start I hoped for but was making up places as the race went on. I managed to get as high as seventh until I ran out of steam and slipped back to eighth. The heavy rain made race two a bit of a lottery but I got stuck in and enjoyed it. I found some good lines, stayed out of trouble and finished sixth. Overall I’m happy with my results, it’s been a big confidence boost for me.”

Todd Waters: “It’s been one heck of a weekend. Rain on Saturday left the track with some massive ruts and it was really technical to ride. I was out of my comfort zone a little in race one trying to deal with the ruts but I gave it my best shot. Even though I don’t get a lot of mud in Australia I had a lot of fun in race two. I got up as high as sixth but then crashed with another rider. Even though my gloves were caked in mud I kept pushing on and finished sixth.”

Romain Febvre: “I’m pleased with this weekend but at the same time I was hoping for a better result. Getting the holeshot twice was brilliant but I’m also frustrated to have missed out on a podium result because my speed was really good. I was riding strong in race two and held third position for most of the race until I had a small crash and lost my position. Fifth overall is good points for the championship but I want to get back on the podium again.”

Aleksandr Tonkov: “I seemed to have no luck on the first lap of either race. In race one I got boxed out on the first corner and had to fight my way back to 10th. Then in race two I got caught up in a crash in the first corner and was almost last to get going. I rode hard and ended the race ninth. I know my speed is good and my fitness is strong, I just needed a little better luck and things will come together for me.”