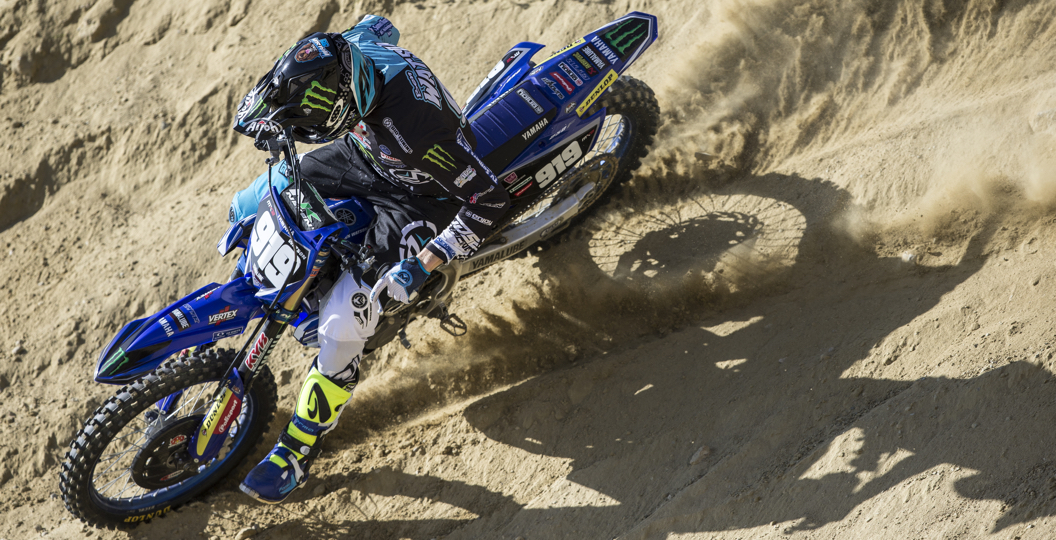 Following on from the first part of our MX2 preview yesterday, where we took a closer look at the legitimate title contenders, the guys on the verge of breaking through are featured in this edition. Eleven days separate us from the start of what promises to be an important season for all of these riders.

In the previous edition of this preview, the spotlight was placed on the riders who should be in title contention this year. Those five guys will win a majority of the events too, of course, but lesser known guys will undoubtedly creep in there and steal some victories. Darian Sanayei will be one of those riders. Sanayei, who showed blistering speed at points a year ago, was particularly good in Argentina and Switzerland. If that is anything to go by, he may even shock onlookers right out of the gate and place himself in the title hunt.

Much like a few of his counterparts, the final ranking that Sanayei acquired last season was not a true representation of how he performed. Eleventh was where he ended up, despite the fact that he missed two rounds due to heat stroke. There is no denying the fact that he should have been pushing the top seven. Scrolling through his results from a year ago, sand was clearly a weakness. That should not be as much of a problem this time around, however, as he has moved to Belgium and put in countless laps in the bottomless sand through the winter. This should be a breakthrough year for the Bike It DRT Kawasaki rider.

Calvin Vlaanderen is one of the guys who could potentially breakthrough into the lead group, much like Darian Sanayei. The initial races that he has completed with Team HRC have been extremely encouraging. Vlaanderen was in the mix with Pauls Jonass and Hunter Lawrence at Riola Sardo, first of all, and then dominated at Mantova this past weekend. There is no doubt that he is firing on all cylinders currently, but he is still sliding under the radar somewhat. How many pundits actually remember the fact that he finished on the overall podium at the Grand Prix of Latvia last year?

The fact that Vlaanderen injured his thumb just days after that milestone put a bit of a dampener on things, of course, but he was right in the mix before that. The field was deeper at that point too. Following Latvia, Vlaanderen was comfortably inside of the top ten and just thirty-three points down on a position in the top six. Even that was impressive, as he failed to score points in three of the first fourteen motos. The point is that the potential is there and he should not be overlooked at all in the days prior to the season opener.

British fans will be keeping a keen eye on the progress that Ben Watson makes aboard his new steed this year. There is no doubt that it is time for him to make the next step in his career and land on the Grand Prix podium, but will he make it happen? Watson was actually brilliant at points last year, as he battled on the verge of the top five and showed a lot of potential. The qualifying race at the Grand Prix of the Czech Republic sticks out as a moment where he actually charged forward and jostled for a position inside of the top five.

Now that he has another year of experience under his belt, as well as support from a factory team, there is no doubt that all of the pieces of the puzzle are beginning to fall into place. Consistency has been a weakness in recent years, but the stability that Kemea Yamaha can offer should provide a much-needed boost. The team have stated that they expect Watson to finish inside of the top eight this year and that should happen. Heck, he was right there at points last year and the field will not be as deep this time around. There is no doubt that he is capable of smashing that target.

Adam Sterry has been around for a while now, as this will be his third term in the FIM Motocross World Championship, but this could be looked at as his rookie season. Sterry missed nine rounds in his first season and then thirteen events last year, because of a torn ACL that was sustained in April, but has still shown flashes of brilliance at points. There is no doubt that he should be a regular inside of the top ten. A sixth in the slop at the Grand Prix of Indonesia was a career-best finish. In total, Sterry has finished inside of the top ten in eight motos throughout his career.

It is actually rather intriguing to look at the results that Adam Sterry has had across the last three years. A black cloud has seemingly followed him, as he has only scored points in both motos at six rounds that he has completed. Consistency is certainly something that he needs to nail down, first of all, but that is hardly surprising. Every single rider in this feature must work on that. It actually seems that Sterry has already made steps forward, as he has been a picture of consistency at the pre-season events and exceeded some expectations.

The dynamic beneath the F&H Racing Kawasaki awning should be rather interesting this year, as none of the riders have proved that they have the full package just yet. Beaton may be the most capable rider on the team though. After all, he did climb up onto the overall podium at Villars sous Ecot last year and then managed it again at the recent LaCapelle Marival event. It certainly seems as though he will be a force to be reckoned with whenever the circus visits a hard-pack circuit like Frauenfeld-Gachnang or even Matterley Basin.

Does that mean that he will acquire a respectable ranking at the end of the season? Perhaps, but it will depend on whether he can limit the damage when the conditions do not suit his skill-set. The deep sand is not exactly where he thrives and, based on his showing at Hawkstone Park, he has not yet mastered the treacherous surface. It is not like things will just be awful at those events though – he acquired a brace of fourteenths in Assen last year. It is also worth noting that his future is still up in the air, because his deal with F&H will expire at the end of the current season.

A lot of talented riders entered the MX2 division last year and some really impressed. Jorge Prado won a couple of events, Hunter Lawrence won a moto and Thomas Kjer Olsen ended third in the final standings. Bas Vaessen did not get a chance to shine, however, as multiple injuries struck him down and left him on the sidelines more often than not. Vaessen finished sixteen of the thirty-eight motos and ended the year down in eighteenth. Those were freak issues, but it was not exactly a one-off thing. There has to be a point where one begins to question what is causing these incidents.

Bas Vaessen showed a lot of heart at the same time though. Who could forget the Grand Prix of Lommel, where he crashed in the first turn and broke his right collarbone. However, rather than wallow in self-pity, he charged through the field and acquired a single point. That was actually the final race that he did with the Suzuki World MX2 outfit. Although Vaessen has not set the world alight on a 114 Motorsports Honda in the pre-season events, a slow and steady start may be the best thing for him. This is effectively going to be his rookie season.

Whilst reflecting on the previous season, there should be a certain showing that Conrad Mewse had that stands out. Mewse was one of the fastest riders at the Grand Prix of The Netherlands, Assen, as he sat atop the board in practice and led multiple laps. Mewse has always had the ability to turn it on and go faster than anyone, so will he use that to record some noteworthy results when the new season fires into life? Well, he actually did that just last year.

Assen immediately springs to mind as an event where he shined, but then he was also great at other tracks. Mewse impressed at Kegums, Ernee, Lommel and Uddevalla as well. The issues that he had at the beginning of the season, where he scored just six points through the first three rounds, will always be referenced when discussing his potential, but it is almost irrelevant at this point. Mewse has proven himself on multiple surfaces and, based on how he performed at Hawkstone Park, should be even better this time around. It certainly would not be surprising at all to see him end as the best-placed rider from Britain.

There are so many question marks surrounding Vsevolod Brylyakov. Brylyakov, a new recruit on the Kemea Yamaha squad, suffered a paralysed shoulder muscle at the Grand Prix of Europe in May last year and could not even think about riding until the off-season begun. Drastic improvements were made through the winter period though and he has been back on a bike for a reasonable amount of time now. It seems as though there are no major issues to speak of, from the outside looking in, although the pre-season events have not exactly been incredible.

It would just be unrealistic for one to expect him to set the world alight immediately though. This is going to be a building process and recording a series of consistent finishes would certainly be a small victory for the flamboyant Russian. Consistency is not his greatest strength, however, as he really shines when it is time to set a blistering lap in practice or qualifying. It is that raw speed that costs him from time to time, hence why he has never actually completed a full season in the FIM Motocross World Championship. This will be his final shot in the MX2 division.