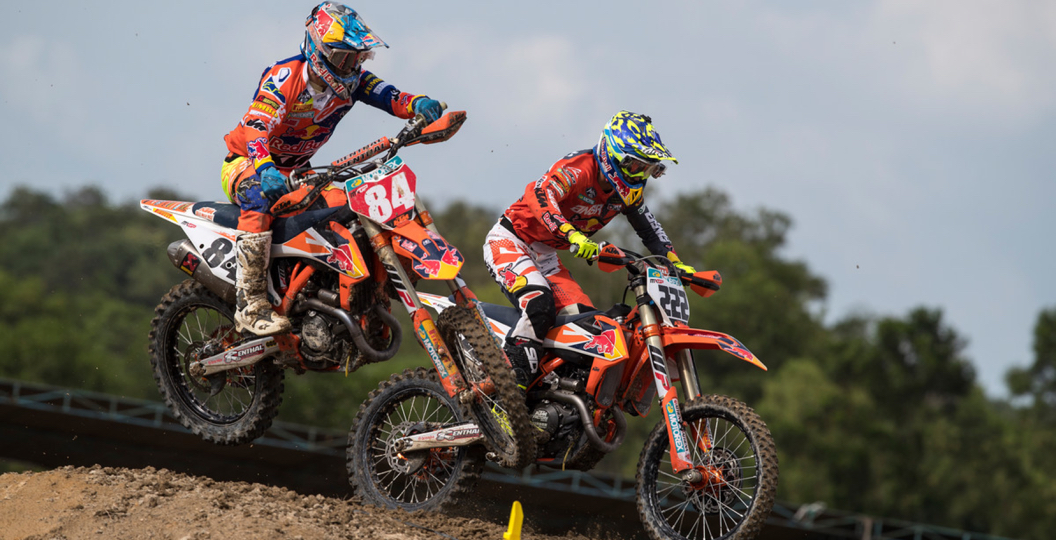 Jeffrey Herlings defied the odds at the Grand Prix of Indonesia and won in what was a ride that will go down in history. There were so many crazy elements to the race, so there was a lot to discuss in our exclusive post-race podcast. The written version of that interview, which was conducted at Pangkal Pinang on Sunday evening, is below. Listening to the audio version adds a different perspective though and is recommended.

MX Vice: I do not even know where to begin. Crazy weekend. The team told you to do nothing crazy, but that seemed pretty crazy. I guess if you are feeling it and feel like you can win, why not go for it?

Jeffrey Herlings: Exactly. It was tough, especially mentally to go here and be so unprepared and unexpected. You do not know what’s going to happen. I was still, last time when I left was on Wednesday morning, after one month I was still sore on the shoulder. I felt like the muscles are weak so I was like, “That is going to be a really long weekend.” I did not know what to expect. I was hoping for a top five.

Actually, I was hoping just to be able to ride pain-free or at least be rideable and then hopefully be somewhere in the top five and not lose too many points. But to come out with a GP win, it is absolutely amazing. It was a sketchy second moto. I felt like I was in control all the weekend. The second moto was for the overall. I was like, “I am feeling it. I have got to go.” Then after four or five laps I started to get tired on the shoulder, because the muscles just got so weak. It was like riding a horse. It was hard to hold on.

Obviously you had that crash in the second moto, but one other sketchy moment I saw was on the tabletop before pit lane. It looked like your back end kind of stepped out. That could have been a big one.

Yeah. I was on a scoop tire and the takeoff was really hard and slick. The MX33 would have more grip than with the scoop tire. It started an unexpected scrub, let’s say, and I got out of balance. I got left, right, but I was able to keep it on two wheels. That was good. One of the lucky moments. I just had one tip-over, but also Tony [Cairoli] had a couple of crashes this weekend so also he was pretty much on the limit. We were going for it.

Was there any point, maybe even then, that you thought that it was time to back it down? I know your team were trying to get you to do that. Did you feel like you had it the whole time and there was no need to back it down and try to accept second?

Mentally I could do the speed and I could go faster than what I was showing, but physically it was so hard to hold on. I felt so tired and normally I never feel that way. I had a surgery two and a half weeks ago, not even. Seventeen days ago or something. Then to be racing here in this heat and this humidity against such top athletes and top riders, it is not easy.

The first moto seemed like a proper strategic thing. Maybe not your pit board, but it looked like you were really watching the hand signals that Ruben was giving you. Were you relying on that to figure out how to gauge the race?

After yesterday I was so stiff in my legs, because I just have not ridden. A lot of the muscles just go really quick. In the first moto I wanted to save myself for the second one. I felt like [Clement] Desalle and those guys, I felt like had I given some extra push I could pull away. I did not have that feeling with Tony, of course, but with them I was like, “Okay, if I do this speed and just come in second, just in front of those guys. It will be good.”

Definitely did not expect to go for the win in the second moto. My goal was to just come in second and go 2-2 on the day. It would have been fine. But then Tony was, I do not know exactly, but he was seven or eight seconds down from the beginning and I could keep it there. Then with two laps to go obviously I tipped over, but he threw it away a few turns after that.

Your pit board in the second race was the most entertaining thing to watch by far. There were some proper good messages on there. What did you think as you were watching it? I think on the second lap there was just “why” in all capitals.

At that moment, after three laps or something, I think it was third lap and then I had a six or seven second lead and they put on the pit board, “Why?” I am like, “Dude, I am leading a GP. I broke my collarbone seventeen days ago. I am leading here by seven seconds. What do you want me to do? Stop and just let everybody get by?” After five or six laps I did understand, because then I got tired. I was sketchy. It was like a wild ride, that moto. I got home safe from this one and am looking forward to the next one.

Hopefully we can get some riding going into this week. Hopefully Wednesday or Thursday I can ride, because I fly straight to Semarang now for the second race. I need bike time, also mentally because I am used to riding so much. Maybe that is why I get injured more often? I probably ride the most out of everybody. If you work forty hours a week, you sometimes make mistakes. The same with riding. If you ride ten hours a week, you make more mistakes than when you do probably six or seven hours on the bike, so it is a part of the game.

With three laps to go I saw on your board it said, “Keep promises.” What was the promise you made to the team?

This morning I was stressing out about my laundry, because I need to carry everything home. Ruben was like, “If you promise me not to go for the win, I will do your laundry tonight.” That is why he wrote keep your promise. He said, “If you try to win, I am not doing anything. I am going to be really, really pissed at you.” That is why it said keep promises. I was like, “Yeah, two laps to go, six or seven second lead. I am not going to stop in the middle of the straight and hope he is going to pass by.” Then obviously I tipped over in the turn.

The big question now then, what the hell are you going to do with your laundry? You need someone to do that I guess!

Yeah, but I am feeling stoked so I cannot do anything. My flight is tomorrow morning… I will probably hire someone out here to go and do my laundry. He will do it. Obviously everybody at KTM, I promised to use my brain and not do anything crazy. I felt like I was still, especially until the second moto, I was in control. Second moto… Maybe a little bit out of control, but we got home safe from this one and that is most important.

Everybody said, “Please use your brain.” It is understandable. I am hired by KTM. They pay me a lot of money to hopefully win a championship for them. If I try to come back so quick like I did now and then yard sale it again, that is the most stupid thing I can do. I did not do it and even came out with a win for that, so it is great.

In the end, this was all worth it. You have got twelve points still now going into the next one, so you have got even more of a cushion to play with. Two thirds next week will be good enough. Not that you need to do that, but it gives you a bit of comfort.

Yeah. I know Tony will not get better than what he was this weekend, I would say. If you look at the first ten GPs, nine out of ten I was in front of Tony. If it was one event or two events, you could say it is a lucky shot, but if nine out of the ten times you beat a guy, then it is not a lucky shot anymore. He was one hundred percent this weekend. I was fifty percent and still then being capable of battling the guy is pretty nice.

I feel like I was sixty percent this weekend and normally I should get better and better. Hopefully by Loket or at the latest Lommel. It will be my dream to go to Lommel with equal points or still be in the plus. Hopefully I’ll be pain-free and one hundred percent again and it can be man-to-man at the last five or six races.

Going back to your injury quickly. It seems like the plan was you were going to get to ride this week before you came here. That did not actually happen, did it? Everyone seems to think that you were riding all week before you even got on a flight.

It was also a mental game like that. I let people think I was riding, but I have not been riding. It was the third time I broke it, so also the collarbone gets more weak and weak each time you break it. This was a brand new break. The first two times it snapped on the same spot. This was a fresh place. There was a big plate on there and everything should be okay now. I wanted to get every single maximum day I could to let the healing do its job.

I did an interview with Dirk about this in Lombardia. Everyone likes to think, “Jeffrey got injured. Standard. That is always going to happen.” If you look at your time on a 450F, there have not been that many crashes though. There was Ottobiano last year. There was coming down the hill in Russia, which was a bit of a big one. Other than that though, I cannot think of anything. This is, like you said, just something that is going to happen when you are pushing the pace that you are.

Yeah, it is just very unlucky. The crash I had… This year I cannot even remember having a big one or anything. Even this one, I just went into the turn and the front wheel washed. I just landed right on the shoulder. It happened like going forty kilometres an hour. I just ran through the rut, through the berm and with all the force on the shoulder. The collarbone is just a small bone.

Maybe if I would have landed just on my hand everything would have been fine? I would have stood up and would continue the training session. That was just very unfortunate. There are eight rounds to go and three more months and [I am] only twelve points in the lead. It is going to be, as well as MX2, a crazy ending probably. KTM are good, because normally one of us and then MX2 one of those two guys will win the championship. We will see.