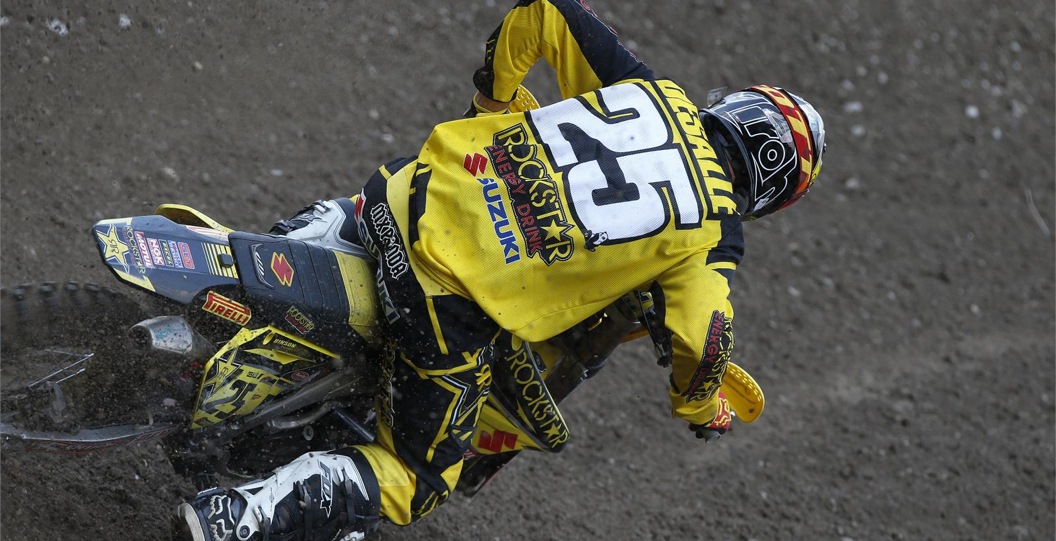 Rockstar Energy Suzuki World MXGP could be back to full strength for the Grand Prix of Czech Republic and the 14th round of 17 in the FIM Motocross World Championship this weekend.

Clement Desalle has made progress from the pain and discomfort suffered in the wake of his first corner crash at the Swedish round over two weeks ago and is hopeful of joining Kevin Strijbos on the works RM-Z450 in the team’s quest for their 14th podium trophy of the campaign.

“I haven’t ridden the bike yet but I have had some improvement to the point where I have been able to try some activities like cycling and swimming,” commented the Belgian on his way to the European launch of Suzuki’s 2015 RM-Z450 technology at Valkenswaard this week. “There were no breaks or other serious injuries but the nerves around the muscle and especially my ribs were so painful. I felt like I could hardly move. I banged the ribs and generally felt quite bad but it has been getting better.

“I have to say that I feel pretty positive,” he added. “I’ve had some thinking time at home and that crash could have easily been much worse. I was lucky.”

Desalle and Strijbos have good reason to look at Loket with optimism regardless of their shape and form. It was around the hilly, slippery hard-pack in 2005 that Strijbos gave the RM-Z450 its first Grand Prix victory. Desalle has won on three occasions; 2009, 2011 and the last coming in 2013 where Strijbos walked the second step of the rostrum for a comprehensive 1-2 finish.

Although he has yet to fully confirm his participation this weekend, Desalle’s objective for his comeback will be to get back into his racing groove and keep one eye on the championship standings where he needs to work on a 45 point gap to Jeremy Van Horebeek and second place in the MXGP table.

“I like the track and have had some good results but I won’t be 100% so I will just take whatever I can manage,” he said. “Loket could be said to be ‘easy’ in some ways but at this level every track can be punishing! Stretching my right leg is uncomfortable and I still have pain in my wrist after the crash in Italy, so overall my physical condition is not great. I’m pretty sure I can be in Loket and will just do my best.”

Strijbos is chasing his seventh podium finish of the year, which already represents his most successful Grand Prix season since 2007. The margin to his team-mate in the standings is 46 points and the Belgian could take advantage of Desalle’s weakened state to narrow the deficit and aim for a final top-three slot in the series, something – again – which he has not managed since 2007. That same year was also the scene of his last Grand Prix triumph and it would be a timely achievement if he could taste winner’s champagne again at Loket.

“Six podiums now and things have been going well and better than some races in the start of the season, but it would be nice to change a few of those third positions to second or firsts!” the Belgian said. “Loket is such an old-school circuit and something a bit different and special on the GP calendar. I think you can love it or hate it. I don’t know if Clement will be with me this weekend but I’m not looking at the championship too much as there are still quite a lot points between us both.”

Rockstar Energy Suzuki Europe have been busy since the Grand Prix of Finland. The German MX2 crew travelled to Tensfeld for the fourth round of the ADAC MX Masters series and Team Manager Thomas Ramsbacher along with Glenn Coldenhoff have been in Valkenswaard, Holland this week for the 2015 RM-Z450 launch.

Coldenhoff joined the likes of Ricky Carmichael and a spread of European press to help introduce the new machine. The Dutchman has been putting in the laps around the practice track in order to hasten an MX2 Grand Prix return in what is his final season on the RM-Z250 but is still not in a position to confirm an exact round; either the Belgian Grand Prix on August 3rd or the Brazilian fixture at the beginning of September.

“We are working on a plan for Glenn to be on the bike again at a Grand Prix but he had a small crash on Saturday and hurt his hand so we are taking it easy when it comes to making sure the time is right,” said Ramsbacher. “He will be riding the new RM-Z450 for us in MXGP next year so it was important and positive to have him here next to Ricky this week for the European launch. The weather could have been better but it has been going well.

Jeremy Seewer and Julien Lieber will be prepping for the stones and hard-pack of Loket this week on their works RM-Z250s before the dive into deep sand and the Lommel circuit the following weekend. Seewer has finished fourth and second the two previous years in the Czech Republic while contesting the European EMX250 series and has experience of running at the front around the steep Loket hill as well as learning that a decent start is almost essential for success. Lieber missed the Czech round last season while convalescing from a knee ligament injury.

“We are up to round 14 of the world championship but it doesn’t feel like the end of the season, especially as we are still in July!” Ramsbacher commented. “We still have a busy programme with the ADAC ahead as well as two of our riders are likely to be at the Motocross of Nations. We are also really looking forward to Glenn’s comeback.”

The MX2 paddock is still reeling from the shock news of World Champion Jeffrey Herlings’ crash in a charity exhibition race that left the Dutchman with a broken leg when he needed just five points to confirm a third title this weekend. For the Rockstar Energy Suzuki duo the current champion’s absence will mean an outside chance of fighting for victory as Herlings has grabbed the winner’s garland at every round bar one this year. At the very least it is one competitor less in their quest for maximum points and Seewer’s quest to catch Jose Butron for ninth place in the MX2 standings while Lieber sets his sights on reaching the top 10 from his current ranking of 13th.

The long-term weather forecast predicts temperatures in the mid-20s but showery conditions on Sunday.