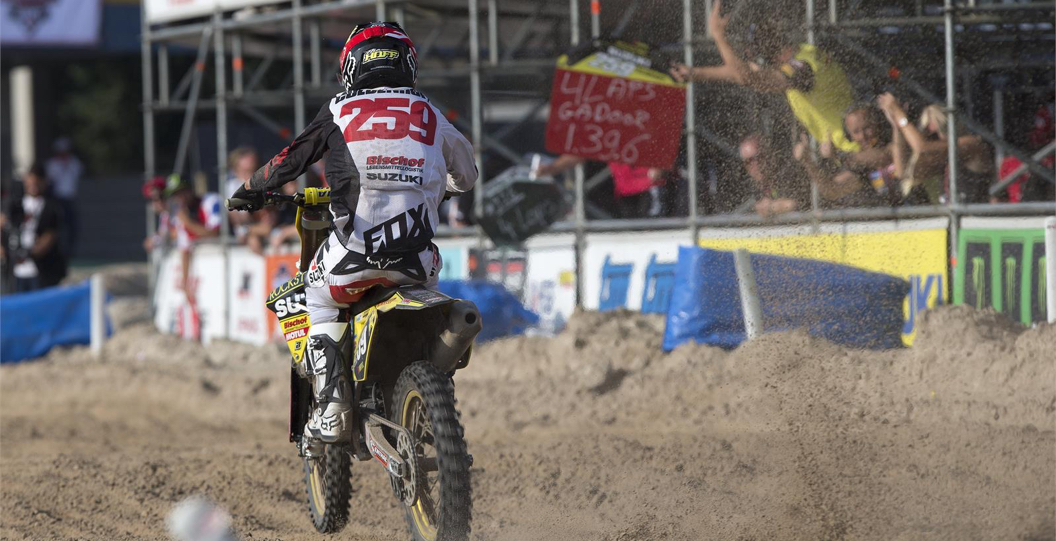 Rockstar Energy Suzuki Europe’s Glenn Coldenhoff rode to a decent third position overall in front of a 37,000 crowd wedged into the vast stadium section at the Assen circuit for the Grand Prix of the Netherlands today.

Sunny skies and pleasant temperatures graced the last European date on the 2015 MXGP schedule and the fine sand of the temporary structure laid over a section of the famous Asphalt in northern Holland housed a rippled and difficult track.

A holeshot and confident run from the first corner to the flag gave Coldenhoff his first Pole Position of the season on Saturday and round 16 of 18. The ‘#259’ pushed his RM-Z450 into the gate first on Sunday and in front of an expectant set of fans for what was a unique and well-received set-up for MXGP in 2015.

In the first moto of 30-minutes and two-laps Coldenhoff could not repeat his excellent getaway from Saturday and crossed the line for the first time in seventh spot. For practically the whole race distance he had to deal with the threat of champion-elect Romain Febvre. The Frenchman hounded the rear wheel of the Suzuki but Coldenhoff held his line, did not make mistakes and scored fourth position; his best since celebrating victory in Latvia five rounds previously.

Starting the second moto, he was faster and more proactive at the front. He hunted the rear wheel of Shaun Simpson and passed the Scot to take second place on lap 11 of 20. He was unable to do anything about runaway leader and eventual World Champion Febvre but had enough points to make sure of his second set of silverware this season.

With Rockstar Energy Suzuki World MXGP riders Clement Desalle and Kevin Strijbos sitting-out after shoulder and thumb operations respectively, Coldenhoff represents Suzuki’s main presence in the premier class and sits in eighth position in the championship standings. The rookie had the goal of a top-10 finish for 2015 and is firmly on course. Todd Waters is 37 points behind while the Dutchman needs 34 to rise another place.

MXGP takes a break for one week before hurrying to a conclusion with a back-to-back schedule of Grands Prix in Mexico and USA followed by the 2015 Motocross of Nations in France.

Glenn Coldenhoff: “An amazing feeling, especially here with the crowd. Yesterday went well and having Pole made things quite a bit easier. I didn’t manage the same starts and when the guys are pulling away at the start of the moto it is hard to come back again. I had a really tough first moto and Romain was pushing me hard all the time and I was happy I could keep him behind me. The second moto was great – the track suited me better – and I felt like I could go on and on until the last lap. It was so special to feel the crowd behind me and I’ve actually not seen something like this in Holland before. I had Goosebumps some laps!”