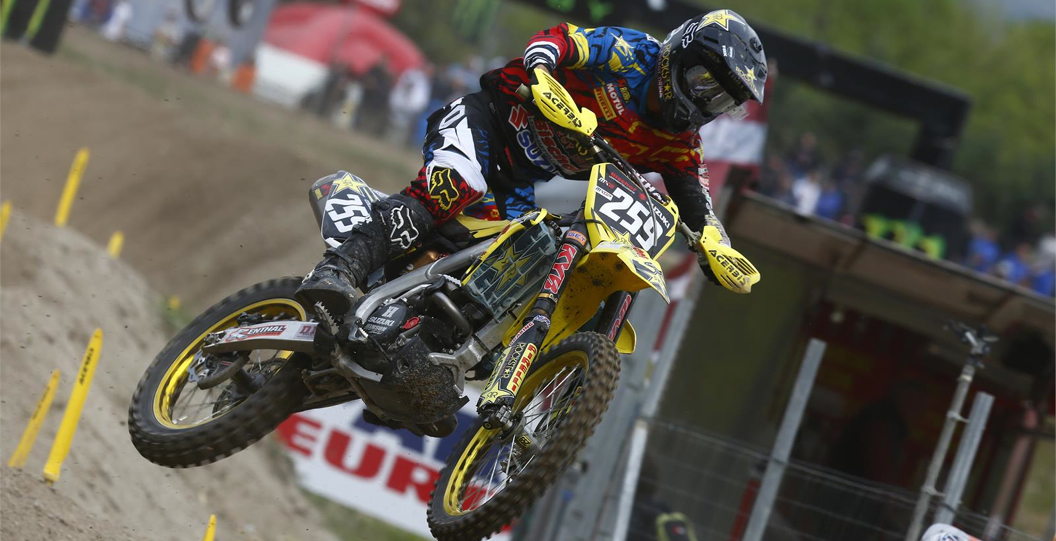 Coldenhoff back at Lommel!

Rockstar Energy Suzuki Europe’s Glenn Coldenhoff will make his comeback at this weekend’s 15th round of the FIM Motocross World Championship at Lommel.

With the Dutchman set for his first MX2 appearance since recovering from knee injury and missing the nine previous rounds of the series, the 23 year old will climb aboard the works RM-Z250 even though a right hand complaint has limited his practice time over the last week.

“It will be good to get back in the paddock and racing in Grands Prix again although I would have preferred in slightly better circumstances,” ‘#259’ commented. “I had a small problem last week when I had a ‘high-side’ type of crash and caught my hand around the front brake lever. Nothing was broken but I had to leave the bike to the side for a week.”

Coldenhoff is making his Grand Prix return on some favourable terrain. He is a natural sand rider and this special set of skills will mark the difference through two difficult motos for both riders and machinery at Lommel (last seen in the international motocross spotlight thanks to the 2012 MX of Nations). “I’m fit through all the work I did to recover from injury and stay in good shape,” he said. “My race fitness will not be like it was at the beginning of the year but I think with a good start and being able to find a rhythm in the sand I hope I have the pace to be in the top-five in both motos.”

Coldenhoff secured three podium finishes in the first four rounds of the championship and is keen for more silverware before he completes his last term in MX2 and heads onto the RM-Z450 for the team in 2015. He will join Jeremy Seewer on the 250 this weekend but Julien Lieber will not be present after amicably agreeing with the team to end their association for 2014. “We want to wish Julien all the best in his career and he has undoubted potential as a motocross racer,” commented Team Manager Thomas Ramsbacher. “It was the best time for both of us to move on for different motivation.”

Seewer is coming to the end of his first Grand Prix season and is currently 10th in the MX2 standings. Before the final flyaways to Brazil and Mexico a tough outing awaits in Belgium. “It will be hard this weekend because I need to move to a place and be able to regularly train on a track like Lommel,” the young Swiss said. “There are guys with a lot more sand practice even if I feel that every year I get better and faster in it…but I will do my best there.

“I wasn’t too bad in Valkenswaard earlier this year and I know it is something that will get better for sure once I start riding a lot more in the sand, which up until now I haven’t had the chance to do,” he added.

Receptive to the demands of Lommel will be Rockstar Energy Suzuki World MXGP’s Kevin Strijbos. The Belgian is quietly optimistic of his fourth podium result in a row and a fifth from the last six meetings in the premier class. The 28 year old almost snared victory at the last Grand Prix to take place in similar terrain at Lierop last year and the final fixture of the 2013 MX1 campaign.

“Lommel is heavy but normally I am always good there,” he said. “I like the sand a lot. Tony [Cairoli] will be the man to beat but we have done some testing for the sand and I am looking forward to it.”

Kevin will be alone in the awning this weekend on the factory RM-Z450 as Clement Desalle takes time to recover from his broken left scaphoid. “It will be OK being the only one this weekend…maybe a bit more pressure but the team don’t really put that on me. They hope I will do well of course. I will try to make the best of it and reach that top step – or at least on the podium.”

Strijbos is odds-on to move up to third place in the MXGP Championship as he lies just 15 points behind Desalle. “Many riders are hurt but that is also part of the sport. I’ve had my share in the past and even this winter. You have to be in it to win it, but to take a championship podium finish at the end of the season would be good.”

The Grand Prix of Belgium will be an important meeting for Brian Hsu. The sand will close the 2014 European EMX125 Championship and the teenager is leading Dutch youngster Davy Pootjes by 12 points after winning the last three rounds in a row. Guiding the RM125 for the last time before a forecast jump into EMX250 for 2015, Hsu knows this is his best chance to grab a title for himself and the Rockstar Energy Suzuki Europe crew this season.

The long-term weather forecast predicts warm but overcast conditions for the weekend with a chance of rain on Saturday.