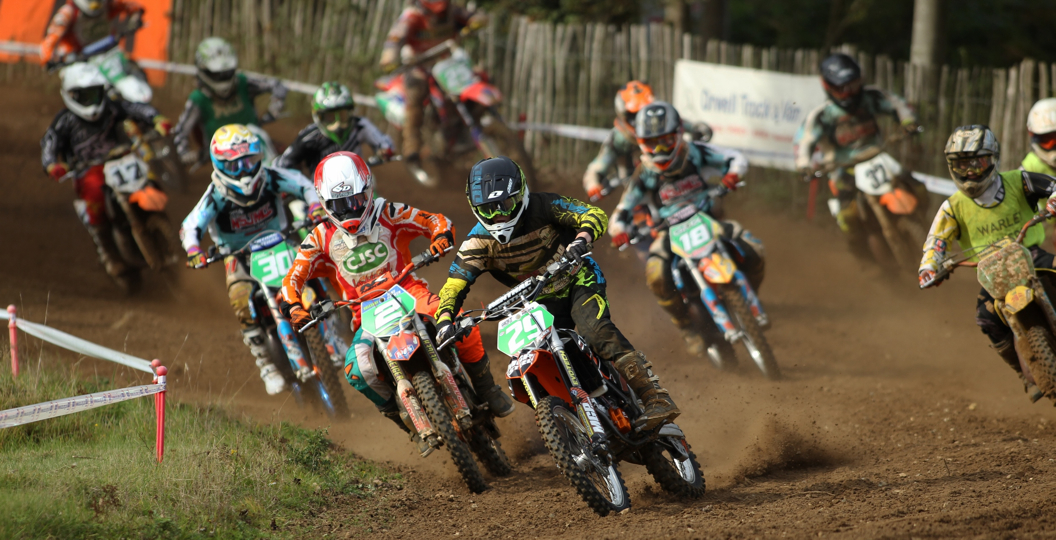 This past weekend saw the ACU BYMX Team Event take place at the sandy Blaxhall Circuit near Woodbridge in Suffolk. With some rain leading up to the event, the venue was in great condition ready for the two days of action to start on Saturday morning.

With eight teams competing for the title from across the country, including some of the country’s best youth and adult riders, the racing was action packed both days. Saturday started with each of the classes having one practice session each before the racing started.

In the 65cc class saw young Charlie Heyman on his KTM from the Cambridge Juniors Scramble Club (CJSC) dominate the class by taking five strong race wins across the weekend to secure the individual honours in the 65cc class. Charlie Palmer from the Warley Wasps club rode consistently to secure a solid second overall after finishing the weekend with two second places and three third place finishes. Third overall went to Oliver Barr from the Cumbria club, with his two team mates finishing fourth and fifth overall.

The 85cc small wheel class would see Cumbria rider Ryan Thompson take the overall win in the class, after securing two wins and a fifth on the opening day, but would have to settle for a second and third place finish on the Sunday. On the Sunday it was Drew Anderson from CJSC who took both race wins, but his opening race result on the Saturday limited him to second overall, ahead of local rider Josh Peters. Norfolk and Suffolk rider Peters took one race win on the Saturday to help him hold off the challenges from Cumbria rider Sam Donnan in fourth and Norfolk and Suffolk team mate Sam Nunn in fifth.

In the 85cc big wheel class it was to be Gest Hastings rider Brett Pocock on his KTM machine who dominated the class all weekend long. With this being Pocock’s last race on the 85cc machine he produced five stunning rides to take a clean sweep of race wins across the weekend. Dan Bewley from the Cambria team stormed to the front of all the races on his Kawasaki and collected three second places finishes, along with a third and a eighth to secure second overall in the class. CJSC’s Tom Grimshaw took a well-earned third overall with Norfolk and Suffolk’s Ben Clark and Max Bickers in fourth and fifth places.

The Youth Open Class saw the CJSC club dominate the results with all four of their riders finishing within the top 8 overall. Overall it was Henry Williams who took four out of the five race wins across the weekend. Fellow CJSC rider Declan Whittle took a well-earned race win while on route to second overall ahead of Jon-Joe Wright from Cumbria in third. Fourth and fifth places overall went to Jake Edey and Jake Ford.

Some of the closest and most exciting racing of the weekend came in the Adult class with Honda rider Dan Arnold from the Gest Hasting club taking the overall victory with two race wins and three second place finishes over the weekend. Second overall went to Shaun Southgate on the Honda taking consistent top three finishes in all races including a race win in the final race of the weekend. Third overall on the weekend was Cumbria rider Brad Todd on the KTM with Jack Rowland and Luke Parker rounding out the top five overall.

During the weekend the battle for the ACU BYMX Team title was firmly between reigning Champions CJSC and the Cumbria team with Warley Wasps just behind in third. As the races passed on the Saturday it was CJSC who took the early lead but were soon pegged back by the Cumbria team. When racing resumed on Sunday morning, CJSC opened a small gap but once again Cumbria closed the gap and briefly to the lead in the standings with only a handful of races left. In the final races of the weekend CJSC were able to retake the lead and open a gap to claim the 2014 ACU BYMX Team Event title ahead of Cumbria and Warley Wasps in third. Fourth place in the standings went to the Norfolk and Suffolk B team while the Norfolk and Suffolk A team finished in fifth place ahead of the MCUI, Mid Sussex and Gest Hastings teams.