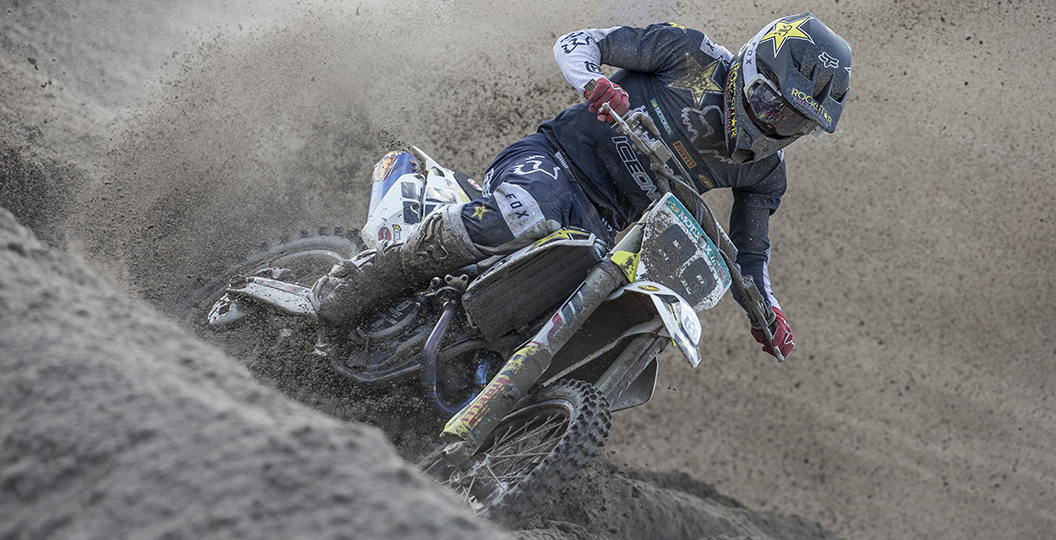 Max Anstie is in a weird position currently, as he still does not have a deal for next year. However, despite that stressful situation, he is still recording incredible results and hopping up onto the podium. Anstie even admits that it is difficult to put everything to one side and do that in this exclusive interview from the Grand Prix of The Netherlands, where he really opens up about the rumours and everything that is going on.

MX Vice: Obviously, coming into a race like this you expect a lot. You were on the podium here before, so you know you can do it. You did exactly what people expected you to do and what you wanted to do. Good weekend, really.

Max Anstie: Yeah, for sure. It has been tough, to be honest. It has been like mentally tough. I came into this weekend and the main thing I wanted to do was just control my thoughts and just focus on only what is important, but honestly there is so much stuff going on in the background. Every conversation I am having is, “What are you doing next year? What are you doing with this?” Then I am actually trying to sort stuff out and then just thinking about that all the time. Even though I have got a manager, Jamie Dobb, which is supposed to make my life easier. Yeah, okay, he has the meetings and things, but still I am thinking about it. I am talking about it.

I was doing great for a while, like even before Turkey. From Ottobiano to Turkey I really sort of was just focusing on myself and doing my thing. That was the right way to do it. Then in Turkey, like before that going to America was quite a real possibility for next year. I kind of just got a bit weird about it. I was like, “Oh man, I have done so much work in Europe and so much preparation on all these tracks and things. I have not achieved anywhere near what I want to achieve.” I feel like I want to have a good go at being up on the box a few more times than three. I got three last year and I am on three this year. I have still got one more to go.

I am trying to do a better job than what I have done. I know how hard I work and where I am. I can see the gap that I have got to close to be battling for a title or to be battling for a top three. It was good this weekend. I did not actually have the best of thoughts going into the first race. Podiums make you feel better and I kind of need them at the minute, because I do not know what I am doing. It is easier when you are feeling great and everything is going really well. You are like, “I am the boy now. I am just going to kill it” rather than like, “Oh, man, I do not actually know what I am doing.”

There are a lot of other things going on. It is hard to focus on what you are actually supposed to be doing, but that is just part of it. I have been doing the best job I can, but it is getting later and later and as it keeps going on it is still up in the air. Still do not know. I would like to stay in the MXGP paddock, but I do not know what I’m doing. It was nice to get on the box. Definitely a little boost and hopefully going into Italy I will know more.

If that is all cleared up and I know what I am doing, then I can get on with it and just go racing and not think, “I need this, or I need that or I need to try and do…” It is just better when you don’t really think and just get on with it. But definitely good day. Nice to be on the box. Got the job done. It is never easy. It does not always go to plan, whether it is one thing or another. Just something else that I am learning.

Yeah. It has been a weird one. I thought from quite early in the season, after my concussion and things like that, I thought I was not going to be where I am at now. I thought I was going to have to look for another team. I was like, “Okay, we are doing that.” Then I thought I was staying in Europe. I thought, “Okay, that will be fine” and then it all switched around again. It was like, “Oh no, you can stay. Same team. Everything is going to be good.” I even planned with the team trainer for the off-season, things like that. Had all that dialled in. I was pretty pumped on that and pumped to try to get things working. This was all just after Lommel.

Then it was like not going my direction. It was not really looking good for me, so I was like, “Oh sh*t.” Basically I was just like, “This is not ideal. It is late as it is.” I was sat here looking at the teams and thinking, “There is no space left.” It is not even about a money thing. It is not even about that. It is not like I want five hundred grand or anything. I do not care about that. I just want a bike. I will get podiums. I will get the results I can, as long as I am happy and feel good. I will get good results. That is it, really.

It was [then that I] could possibly go to America. I was trying to speak to Americans and figure that out. There were some possibilities there, but it is late. It is a big risk as well. From everything that I have learned in MXGP I think it would be silly to change, because I feel like I have done so much work and preparation on all of this side of things. It is a strange one. It is a weird one. Hopefully I will know more by Imola. I keep saying that every week. I don’t know. There are not many more races left. This is the last one coming up, so hopefully I know by the last race.

The funny thing in all of this is, like you said, you have matched your number of podiums from last year, so technically from that point you have been just as good and you could even go better than that depending on how Imola goes. Even though you are in a sh*t situation now, you have actually ended up being better than last year with the concussion and everything. That just sums up how weird the paddock is. Maybe it doesn’t come down to results all the time, I don’t know. It is just weird.

Yeah, exactly. It was quite nice to get on the box again, because then at least I know I should have been on the same sort of deal as what I was on this year and top ten in the championship. Really I missed a hell of a lot of racing the middle of the season where I was trying to ride and should not have ridden and was sort of messing myself up. I learned a lot from that myself. I am not blaming anyone. It was my decisions, but I should have said no and listened to my body more. It was just a weird situation, but we have been through that before. It is what it is. Long season and you’ve got to be healthy. I do not really know what to say to that.

It just is what it is, but there are other great riders who do not have… I do not know what’s going on with Jeremy Van Horebeek, for instance. He is a great podium contender. Even Jordi Tixier, who was world champion a few years ago. He is a solid rider. Many guys are in a weird situation. I just think in reality what is happening is the budgets are being cut. There are not enough spots. The teams are going from three riders to two riders and that sort of makes things difficult. The championship is getting so difficult that the budgets have to be cut to go to all these places and this, that and the other.

I enjoy racing. I do not want to say anything bad about anyone. I have loved my last two years and had a great time with this team. It is a shame that I will not be staying, but it is what it is. I have great feeling with the guys. I just want to make the best of the rest of the season and do the best job that I can. There are no hard feelings or anything. I am not going to sit here and go, “I should have been on this. They made a mistake.” There are a lot more things behind everything with the business side. There is a lot more to racing than just winning or just getting results.