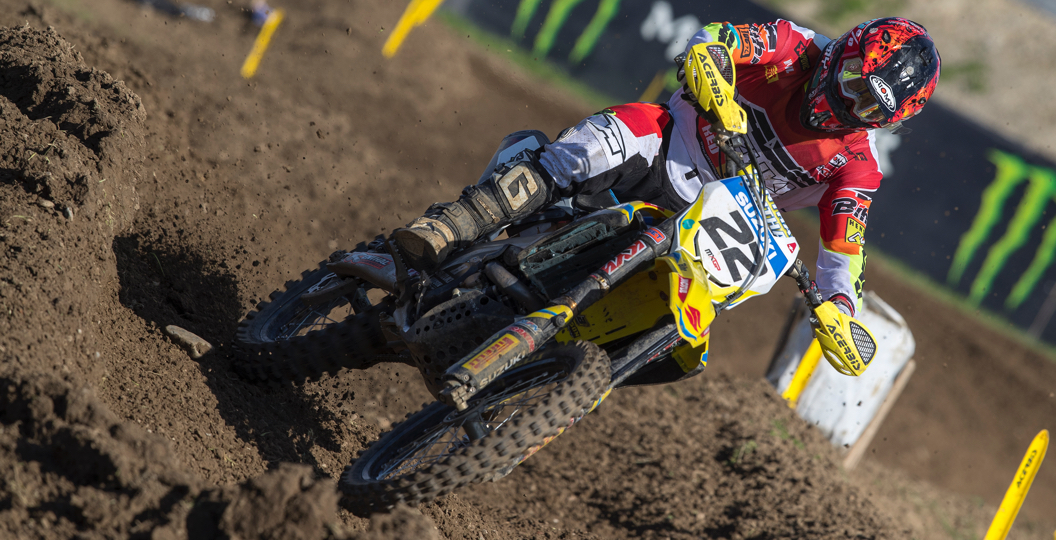 Momentum is not something that Kevin Strijbos possesses currently, following a handful of injury-riddled seasons. A broken collarbone has even interrupted the testing that he was doing with Standing Construct KTM now too. Strijbos is upbeat entering what may be his final season in the FIM Motocross World Championship, however, and has his sights set firmly on the MXGP of Patagonia-Argentina.

MX Vice: The deal with Standing Construct KTM was announced quite late, because of everything that happened with Suzuki, but are you happy with how things worked out?

Kevin Strijbos: Yeah, for sure, I was in contact with them quite early in the year and then we made it happen. It was a bit difficult in the beginning, but then we made it happen quite quick. I think it was done in two weeks or something. We spoke, sat down, got the terms and everything went well. We signed just before America. It is close to my home, just ten or fifteen minutes away, which is also good. It is a small team, nothing big, but there is no stress from anyone. Tim [Mathys] just does it because he loves it. I know the people there from when I was younger, so things are going well at the moment.

Was there a particular reason why it was difficult to get the deal done to begin with? Whatever the problem was, was it sorted out in the end?

Yeah, it was sorted out. It had nothing to do with me or Tim, it was just to do with the brand and manufacturer. It did not go to plan in the beginning, but we phoned again as soon as he got confirmation from the manufacturer and then sat down. Everything ended up happening quite quick.

You must be happy with how everything worked out. Had you been able to stay at Suzuki, you would have been left without a ride at the last minute and scrambling around.

I had to get off the team anyway and I knew that quite early, which is why I was searching. The results did not come good, because of the injury that I had with my elbow, and then I did not know what to do. I began to think that it was going to be last year, even though I did not want it to be. Tim came along though and I think everyone saw that the stress fell off from America on. Things started to go well again, with the riding and everything. There were still a few teams who I was talking to, so I could go to some other ones also, but I think that this was the best and had the best equipment. They had a team in the past and everything was fine then.

I am guessing that the factory support was a big part of why you signed. Did any of the other teams that you were talking to have support from the manufacturer or anything like that?

Not all of them. I think one did, a little bit. I do not know what we have now. I just know that we have good bikes and do a lot to the engines inside of the workshop. I am not sure how much we get that factory support, but I am quite happy with the bike at the moment. You do not have to get too much factory support, if the base is good, because sometimes you have so much stuff to test that you end up a bit lost and do not know what to choose anymore.

You have noticed that then, there is less testing than there was at Suzuki World MXGP and that makes it easier?

Yeah, for sure. You have good points and bad points about being on a private team. The good point is that sometimes there is not so much that you can try. You have something and even if it is not one hundred percent, you still have to go with it. That can be a good point, because otherwise you keep on searching and takes days or weeks to find something. We just have a good base now and know the bike well. There are still some details that we need to work on, but it takes time. I am happy at the moment. We will see.

How was testing before the collarbone injury? Was there anything that you desperately wanted to fix before the first round of MXGP?

We actually started quite late. I was in RedSand in Spain in December, but just with a stock bike. We tested the last two weeks that I spent in Spain. There was not too much, but we tested what we had to test. The engine guy knows what he has to do, so he is working now and the plan was to test a bit more. We both got injured though and now it is pretty difficult. I think that we have a good base to go to Argentina, then maybe we can test a little afterwards.

Do you think it is one hundred percent that you will be in Argentina? Explain a little more about what is going on with the injury.

My bike will be one hundred percent – that is not going to be a problem. We have to see how the injury goes. I had quite a lot of pain after the crash, which was not normal. I broke my collarbone in 2004 and rode one more lap with it. I had so much pain straight after the crash this time though, because it was already plated from before. I have to go back to the hospital in two weeks to see where we are at, so hopefully I can start to ride between Hawkstone Park and LaCapelle Marival.

We will still have some time. Even if I can start after LaCapelle Marival, it will give me a week and a half. I want to ride before Argentina, rather than the doctor telling me that I can ride Wednesday morning and then that I have to fly to the race that afternoon. If riding goes well, then it is fine. I just need to try to make the best of it. I know it is not an ideal start, but it is what it is. It is good that I can ride instead of just staying home.

Did the injury that Valentin [Guillod] sustained put more pressure on you? Do you feel more pressure to get back out there and represent them?

No, not really. The team is easy. They know me and that I always to do a lot to come back quick. I am working on the shoulder a lot now to make it heal quicker and they know that, so they are fine with it. They just say to not worry and start too early. It is best to wait one more week and then see. That is what I am doing and, yeah, they are happy.

When I spoke to you last year, you said that this would definitely be your final season in MXGP. Are you still set on that or is there a chance that you will keep going?

It depends. The biggest percentage is that this will be my last year, but it depends how it goes. Maybe I can do one more year with this team, if it goes really well? I feel good with them and want to stay with them. Even if things do not go well and I want to stop, maybe I can try to get something inside of the team like a trainer? Like I said last year, this will probably be my last year and I’ll try to get everything good for that. I will try to stay healthy and then we will see where I end up.

Finally, what kind of results would you like to get this year? You proved that you can run top five last year and, with some momentum on your side, there is no reason why you cannot do that again.

Everybody wants that, for sure, and it is not easy to finish in the top five at every round. There are so many riders who can do that. Like you said though, I showed that I can do it towards the end of last year and even now I feel good on my bike. We just need to get some good starts. Starts were actually the main problem last year and then when I got a good start, I showed that I can be top five or maybe even on the podium. There is no pressure from the team. I know that this could be my last year, but that can also be positive. I just want to give it everything that I have in every race. If I can run top five or six, then I will be happy.