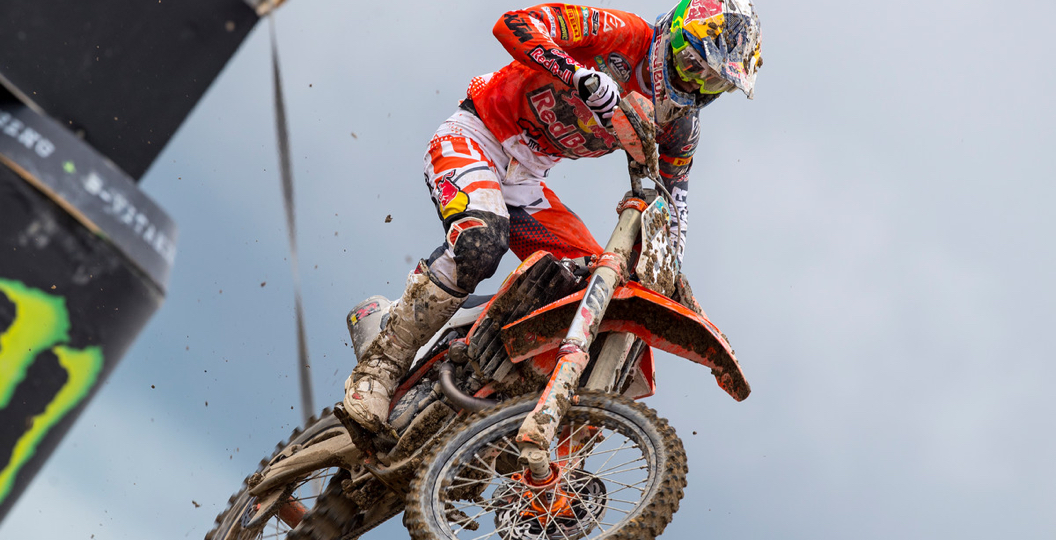 Jorge Prado made more progress at the Grand Prix of Indonesia, round twelve of the FIM Motocross World Championship, and now trails Pauls Jonass by just seven measly points. Had he been able to contend for the victory, however, he could have claimed the red plate for the first time in his career. Prado was still pleased with the outcome and the way that things are going.

MX Vice: It was kind of an up-and-down day for you. You made points in the championship, which was good, but maybe you could have gained a bit more had you been able to fight for the win?

Jorge Prado: I think it was a really good day as I got close to Pauls [Jonass]. But the weekend… basically today was a bit difficult because the track was so rough and we had to ride with a lot of power. Could not use that technique flow, because there was pretty much no flow. It was difficult but I was still pushing. The starts were not as useful and I could not pass as I did yesterday in the first laps to the lead. That kind of blocked me a bit as I could not find the good rhythm.

Sticking behind the other guys just made me lose a lot of energy, as I was not running my speed. I think I need to be happy because it is difficult to be always so consistent and I am still on the podium, like I said getting closer. Track conditions were really tough. Easy to get injured or crash, so I did not crash and did not get injured. I am really happy with how this weekend turned out.

In the second moto in the beginning there was kind of a big battle for second with Pauls leading the way. It kind of looked like he was holding up that entire battle and once you got past him the race kind of started for you. Did you feel like he was in the way a little bit?

Yeah. We are all trying to fight every single position, but I think if I could have passed him quicker… I think I would have the chance to battle for the win. Being behind Pauls that first laps, just did not make any better to me. I got a bit stiff in my shoulders, because the corner speed was not there, because I was behind. So I tried different lines, but finally I knew the spot and I went for it. After that I got a bit closer to Calvin [Vlaanderen]. I started kind of getting there, but I just could not make it happen. It is like this. I just could not catch him. He did well today.

The first moto was kind of similar, because you would gain time on Pauls and Calvin, then lose it and then gain it again. Looking back now, is there anything that you feel like you were doing wrong or could have done better?

Yeah, I think I was doing pretty okay the whole track. There was just one corner before the waves – that kind of section there. I think I was the slowest rider on the track. I think even the Indonesian guys, they are not GP riders, they go faster than me. I was struggling there already since yesterday. I also tried to make the pass there in the last lap in the first moto to Calvin, but that part was so tough for me. I do not know why. I was just struggling. I think if I could have fixed that small turn, I think it would be a bit different. Every track has its difficult parts and this track really got me hard.

Things got really close with Calvin at the end of the first moto, especially coming into pit lane. I guess you just knew that those two points were important, right? Once you saw Pauls go through, you just knew that you had to make it happen?

Well, I was fighting for going for third. Still a few races left, so I am not really looking for the championship. Of course it is good to get closer. It is better so I can win. I tried to pass him. I made it really fast in the waves section, got close in the next jump and then in the straight he kind of went my way. I knew he was going to do that. I cut him, but I was not fast enough. I did not have the speed to go through all the ruts and mud to block him. I tried until the last corner but he beat me in the first moto and second moto. I was just trying to get him.

The MX2 class is kind of changing in some ways. There are new guys up front this year. Before this year, Calvin and Ben you didn’t really have to worry about. What is it like battling with them? Is it kind of tough to get your head around a little bit? Like did you feel like you could relax when you saw Watson on the pit board in qualifying, but then obviously he was not letting you?

But, like you said, Vlaanderen got his first win of his career I think this weekend. It was good for him, good weekend. Ben is coming strong in some races. Pretty strong guy. Second moto… He was riding really fast. It was like that. He was faster than me. That is why he passed me. I just could not hold onto him. I knew third was okay. I just want to be up there and did not take any risks. I think I could have gone a bit faster today just a bit more, but it is good how we did. I am happy.

This was the first proper Indonesian GP we have had in the dry. What did you think of it, the people, the area and the track? What did you make of it?

It was not really dry. I think yesterday was a bit drier than today. It was a bit more racing. Today was kind of difficult and struggling, because of the deep ruts and soft spots, which did not make that you could keep the flow all the time. But it is nice that it was not like last year. It was one hundred times better. It was possible to make a race. Last year it was not. Last year I got zero points. This year I got points. I got on the podium. I am happy with making a proper race in Indonesia, which is kind of difficult.

Finally, what are your plans before the next race? I know some guys are maybe going to try and ride. Are you doing anything special?

No. I do not think you can ride in Indonesia with a bike. You mean go back to Europe? I do not know. I just stay with my programme, which is going to the next race. I do not know what we are going to do. Maybe see some things if there is something to see around the area. For sure I will keep training pretty hard this week.

I think it is a good week for training, just physically and getting used to the heat. They say next weekend it is going to be even more. I hope it is not so humid. I do not know how the humidity is over there, but if it is less humid it is a bit better. The humidity kind of makes you not feel really comfortable. With the heat, I am pretty okay this year. Will be nice if it is just the heat and not humidity, because if it is not everything goes up, It is going to be a really hard race.