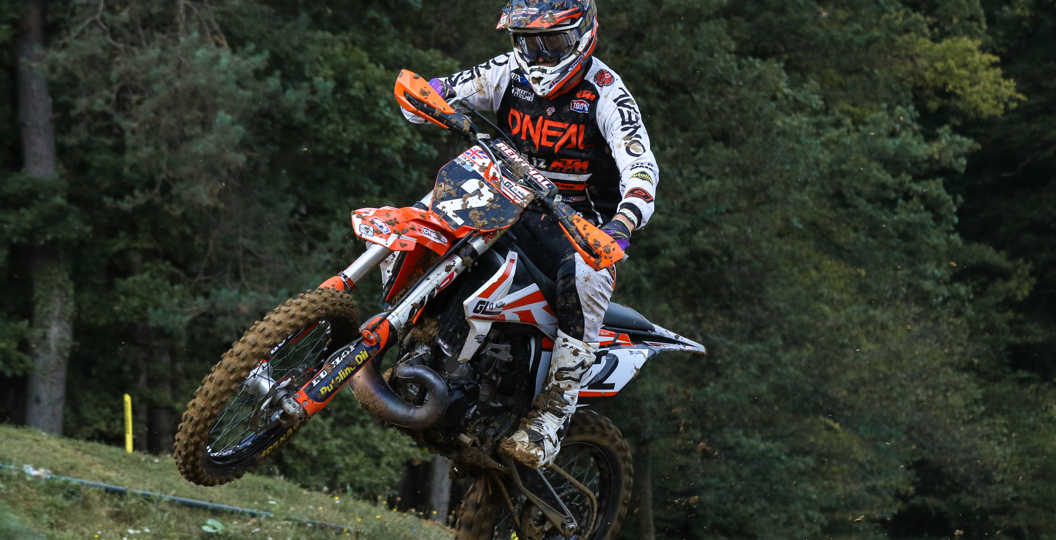 Whilst everyone was winding down and championships were being decided at the final round of the FIM Motocross World Championship, the MXGP of Pays de Montbeliard, there was one last surprise in store in the EMX250 category.

The two-stroke revival has been growing steadily around the world and this is not just down to Ronnie Mac talking to a new generation of riders, it’s been down to specific people behind the scenes championing the return of these bikes. Did you know that the EMX300 series has nearly died a few times? At one point there were thirteen riders lining up. Now that series is thriving, along with the various EMX categories available on the Grand Prix scene, and a 250 two-stroke can even slot in next to the rising stars in EMX250.

James Dunn and the GL12 team took advantage of that this past weekend, as a break in the schedule allowed them to slot into the EMX250 finale as a wildcard. Dunn, who was initially going to take a break this season, was thrown a lifeline by two-stroke enthusiast Bob Buchanan and jumped alongside Mike Kras beneath the GL12 awning in May.

Whilst others were celebrating the stars of yesteryear on vintage machinery, we witnessed a new star push to the forefront of British motocross and his crew deserve recognition. We caught up with Bob following Villars sous Ecot to discuss his team and decision to back the two-strokes.

MX Vice: Bob, tell us a little more about the EMX300 situation.

Bob Buchanan: At the end of the 2015 season, Youthstream were intending to cancel the EMX300 championship and even released a calendar without it for the 2016 season. This would have ended our GP participation, as a two-stroke-only team, and halted the return of the two-stroke machine to top-level motocross. At this point I discussed my points with Youthstream and the FIM to keep it, whilst at the same time pushing them to readdress the capacity balance.

The existing rules had been in place for fifteen years when four-stroke technology wasn’t what it is today and there was no way that a 125 two-stroke was competitive with a modern 250F. The same goes for a 250 two-stroke against a 450F. We had already proved these arguments in 2014 and 2015 with Lewis Gregory in the British Championship and at the British MXGP.

What was the result?

After a meeting in Lommel in 2015 with Giuseppe Luongo, Youthstream made a U-turn on the EMX300. They put in motion with the FIM a rule change to allow 250 two-stroke machines to race in EMX250. It would have been a big step forward to make the sport more economical if this same rule could be applied to MX2, but pressure from the factory teams would not allow it to extend into the MX2 class.

Why were there not more teams and riders using two-strokes in EMX250 this year?

At the end of 2016 the rule was changed and 250 two-strokes were allowed in EMX250, but the press release for some unknown reason was delayed until the spring of this year when it was too late for many riders to reconsider having already purchased equipment or signed deals for 250 four-strokes.

We have already seen the two-strokes running with four-strokes this year.

With the EMX300 starting later than the EMX250 rounds, I entered Lewis Gregory and Mike Kras and Brad Anderson entered himself to ride Valkenswaard. Mike poled it that weekend and came fifth in one race, but Lewis was unfortunately injured. Brad achieved a fourteenth, so for me this demonstrated that the two-stroke was indeed competitive but would not dominate the class as many four-stroke riders and teams had feared.

Obviously, things have changed with your team’s performance at Villars sous Ecot?

Yep, we entered Dunny as the EMX300 series had finished and history now tells us how important that decision was. We saw him on the top step as the first person to put a two-stroke there and that was with him leaving the fuel off and giving the other riders a twenty-second head start!

We know that someone got a little upset about the race win, as you were ordered to strip the bike?

Yep, obviously someone felt that Dunny was on a 300 and we had to strip it down under rules and supervision. Interestingly, the video has had over 225,000 views and has been growing since Sunday.

Is it true that, after the success your team has had, you do not have a sponsor for two-stroke bikes next year?

Unfortunately, no, as it stands we will not be on the line next season.