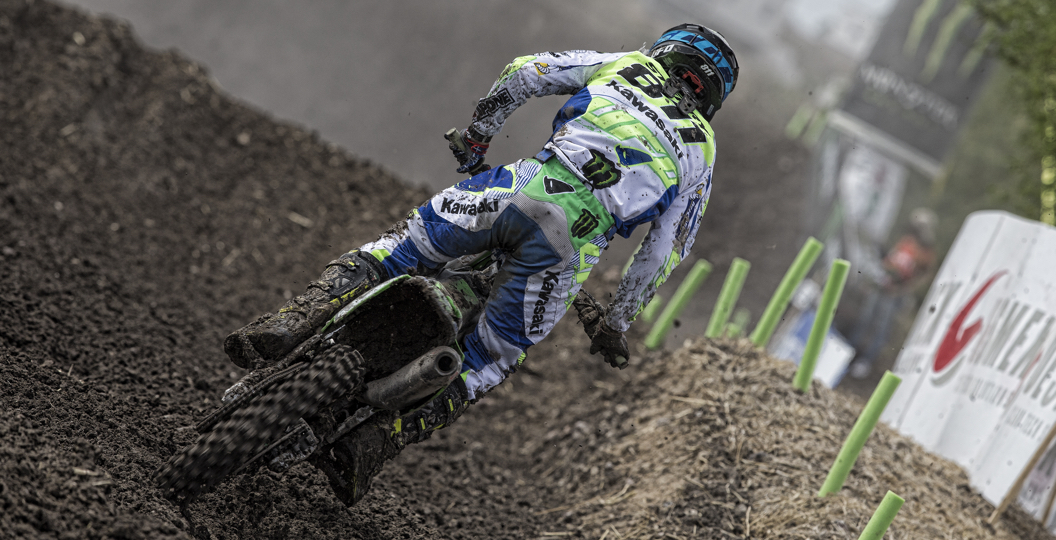 It seems like an eternity since Adam Sterry last tackled a track in anger and, well, that is because it has been. Two hundred and eighty-two days have been and gone since he last sat behind a starting gate, but he is now not far away from a return at the Hawkstone International. The F&H Kawasaki Racing Team rider has just returned from a month of testing in Spain and believes that he can break through when the FIM Motocross World Championship fires into life.

MX Vice: If I remember right, I think that you could not really talk about the whole deal with KRT when we last spoke. How do you feel about that now? You had effectively made it with a three-year deal with a factory team, so getting that ripped must have been tough.

Adam Sterry: Yeah, obviously, it was tough. It would be tough in any situation, signing a three-year deal and then it not turning out to be that. It was what it was. It happens in motocross and I have nothing to complain about, as they gave me everything that they promised. I got injured, unfortunately, which left me in a bit of a bad situation. My season was finished, but I thought that it was alright as I thought that we had two more years together.

I got the phone call that the team was shutting down, so then I was sat on the sofa with no ride. It was difficult not being able to go out and prove myself to get a ride. I was fortunate enough to get a ride with the F&H Kawasaki Racing Team, as they believed in me. I am excited to show them what I can do.

Was it pretty easy to get the deal done with the F&H Kawasaki Racing Team in the end? Was there a point where you worried that nothing was going to happen?

You are always a bit precautious to begin with, especially when you cannot ride. They are a fairly new team and I had never worked with anyone there before. With the help of the team, my manager and Steve Guttridge from Kawasaki, we managed to sort everything out pretty quick. We obviously had to work on the finer details and stuff, but it was a fair deal for everyone. It was fairly easy to sort out.

Did Kawasaki help you out with it, seeing as they kind of screwed you over with the three-year deal? Did they tell you that they were going to look after you and not to worry?

It was not worded like that, but I had help from Steve Guttridge. He helped to put the new deal together. It was not like they were definitely going to put me somewhere, but I think Steve believes in me and thinks that I am a good guy. He helped me with that deal.

This is not a factory team, so what are the biggest differences that you have noticed compared to KRT? Does it have the same feel?

Yeah, to be honest, factory is just a word that means more budget and stuff like that. It is still mainly the team that does the work. If the team has a lot of money or knows to put it in the right places, you can be just as good as a factory team. Everything is going well at the moment. I have spent a month in Spain and we managed to do quite a bit of testing, so I am really happy with how it is all going.

Have you got any trick parts that were left over from KRT or any other help? Did some of the technicians from your old team jump over?

No, it is completely different. Everybody is different. I think that the people who were involved with KRT last year have stepped away from the sport for a little bit, so there is no one from that side helping our team at this present moment.

You struggled with the bike at the beginning of last season, so how do you feel at the moment? Are there still things that you want to improve?

There is always some room for improvement, but I would not be stressing if Argentina was tomorrow. If you turn the injury into a positive, I have been able to focus on my weak points whilst everyone else was racing. You do not really get time to train that much whilst racing – you basically have to stay fit and keep sharp on the bike. I was in the gym working on my weaknesses and made big improvements in a lot of areas. I have turned that into a positive and came into this off-season a lot fitter than ever before, so it has been fun to get back riding and testing. We are looking in good shape for the start of the year.

Are you still nervous about catching your leg in a rut or anything like that? I am guessing that you have had no problems with it.

I am completely over it. When I first got back on the bike I did not want to put it down, was a bit weary in left handers and did not have the confidence. That soon went though. We did not want to hit it too hard to begin with, we just took our time and made sure that we did not reinjure in. We kept up with physio and all things like that. Now it feels completely normal, there is no difference with strength and flexibility. It is normal and not effecting my riding in any way.

You are doing Hawkstone Park, but do you have any other plans before Argentina now that you are done at RedSand?

I am doing Hawkstone and LaCapelle the weekend after. I always like to do Hawkstone, as it is close to home and not too far from my house. A lot of people who I know will come to watch me there, as well as my personal sponsors. I always find that is a fun track. I have raced LaCapelle once before and I am excited to go back there. They are the only two pre-season races that we are doing, seeing as there are already so many races in the year.

Do you actually miss racing in Britain? I know everyone likes to think that you want to do the series, but you have so many other races and it must be nice to not have to travel back and forth.

Yeah, to be honest, I am doing the Dutch Championship as well and that is only four rounds. That is good, because the depth in the Dutch Masters is hard. It is racing good people all weekend and good practice for GPs. It does not add to much to your schedule either seeing as it is only four rounds. When you race in Britain, it is eight rounds and you will only get one or two weekends off for the rest of the year. It is a difficult one to do. I like racing in Britain though and even went to watch one last year. I do think that it needs to improve in some ways, but I miss racing it and the British fans. Hopefully sometime in the future I can race it again.

I was looking at the past points earlier this week and there is a gap for a British rider to take the reins in MX2, like [Tommy] Searle and [Max] Anstie have done in the past. Do you feel like you are ready to step up and do that?

Yeah, obviously that is the plan and has been since I did my first full year. I feel that is where I should be if I get some solid races and finish the off-season strong. I have put the work in and the team has too, so there is that spot to fill. I am sure both Ben [Watson] and Conrad [Mewse] feel the same though. Hopefully I can get good starts, stay injury free and then show everyone what I am capable of.

It is obviously tough to talk about expectations, but I guess that you would be gutted to not have a single podium finish this year? That has to be the first step in your mind.

Yeah, for sure. Everyone would like to go out and win and that is ultimate goal, to go after a world title. My first goal is to try and get a podium though, if you break it up into smaller goals, which I do not think is unrealistic. I think that is where I should be and what I expect from myself.