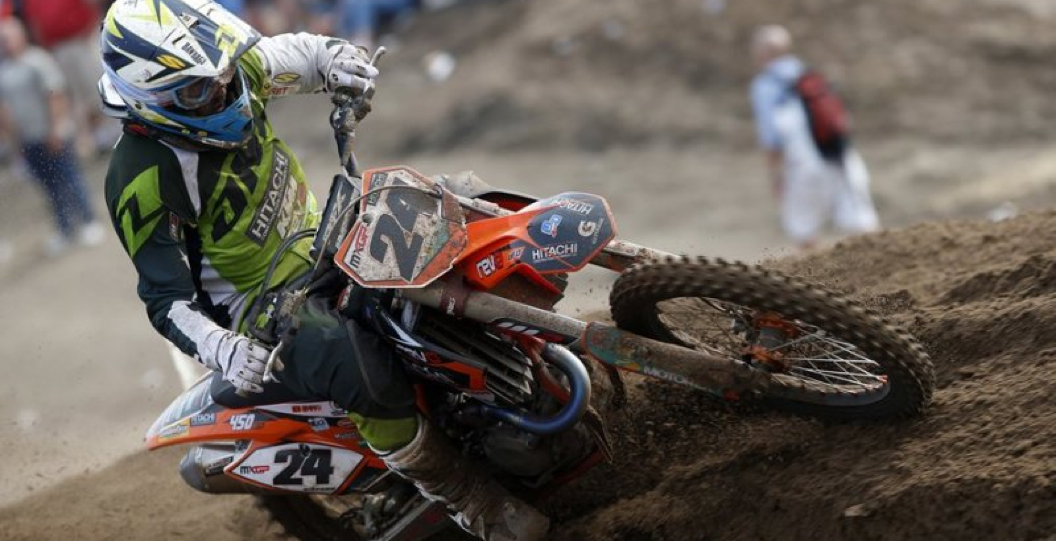 Catching up with: Shaun Simpson

After a brilliant mid-season Shaun Simpson was widely expected to challenge for the podium at the Lommel and the Hitachi Construction Machinery KTM man did just that with two brilliant rides.

Simpson has an air of confidence about him now and although he understands his achievement of currently residing fifth in the championship and mounting the podium on a non-factory machine, the KTM man sees this as something he should be doing. Simpson isn’t getting carried away and his famous down-to-earth demeanour is exactly the same except now he cuts a confident, happy figure in the pits with no hint of the frustration that plagued his previous seasons in MXGP.

We caught up with the always friendly Scot who might just be having the best year of his career, to get his take on the season and his podium performance in Lommel.

MX Vice: You were on our radar as a podium guy this weekend, is that what you were expecting from yourself?

Shaun Simpson: Social media blows it up quite a lot and I have been getting tweets and messages all week that I could do something. But it was just another race for me. I have been saying that all along and I do think I just needed to come with the mindset of two strong motos, another two races, another two starts.  Because everyone knows in the sand that so much extra can happen, there are so many extra variables. Sand is hard to ride at the best of times so you need good starts and consistent laps. But I knew by the way I was riding the last few weeks that if everything went well I could push for a podium.

I had fifth overall last week and I was just looking to better that really, that was my goal. A podium was absolutely great, it was always at the back of course coming in. I didn’t really enjoy the track as much as I’d hoped to with all the 150s, 125s, 300s it got some small bumps rather than longer bumps. The rain also but a different spin on it at the end of the weekend but it was fun.

MX Vice: In practice on Saturday you were playing with the bike on your slow laps, double bumps, whipping it over the jumps, did you just feel comfortable from the start of the weekend?

Shaun Simpson: Yeah everyone knows that it’s the two motos on Sunday that count, you are going to need to save as much energy that you can and just get a good feeling on the Saturday. That was my idea just to go out and play a little bit on the track on my slow laps. I only stay ten minutes down the road, it is one of my local practice tracks so I know how to ride it and the bike was well set up for it.  We only made a few small changes, nothing major and the bike was dialled it was great.

MX Vice: You had two opposite races, in the first moto you had a half decent start and dropped back a bit, a lot of riders were hot and cold and different stages and you came on strong at the end. Was that your plan or an enforced decision?

Shaun Simpson: It was just everyone gets a bit excited, I know it counts at the end, especially the last ten minutes. I saw that I couldn’t go that pace the whole moto so I slowed it down and it worked out for me because I was strong for the last ten minutes and could pick a good few guys off.

The second moto then I had a good feeling and I thought I could maybe challenge Cairoli for a little bit but then when I had to back off he just kept going at that speed and seemed to have things under control and was just playing with me!

MX Vice: Is that good for you to see, he is the best rider in the world and you were right with him and could see what he was doing.

Shaun Simpson: Yeah I don’t think he was doing that much different from me, our lines were usually the same. It didn’t really faze me at all he was just another rider out there to pass.

MX Vice: The MXDN is coming up and last year you rode really well at the event on a privateer Yamaha and followed Barcia through the pack in race two. But this season you have been riding fantastic and must be really high on confidence going in?

Shaun Simpson: Yeah, the team hasn’t been announced yet but as far as I’m aware I should be number one pick. I am looking forward to it, Latvia is a good tack hopefully it gets nice and rough because it is not so nice when it gets fast and less technical. We could have a strong team, I don’t know how Tommy is feeling, he didn’t ride this weekend so I am not sure what the issue is there but hopefully he will be 100%. Then it is down to Neil to make a tough decision for MX2.

MX Vice: Yeah, Max has made that decision a bit harder now!

Shaun Simpson: Yeah he has but sometimes you have to look at the bigger picture and Max’s bike hasn’t been lasting up to it. But if they can prove it can last in the next five/six weeks then he has to be a candidate but who knows.

MX Vice: Obviously in 2008 you were fourth in the MX2 World Championship this year you are fifth in MXGP, is this the best you have ever ridden?

Shaun Simpson: I would say so. I feel like the end of last year and this year we have been picking up a lot of momentum. I keep saying it but we have been turning the screw, we have been working hard.

MX Vice: Is that in terms of confidence or fitness?

MX Vice: Do you think people underestimate that, when a couple of pieces of the jigsaw are out of line people say Simpson is done and this and that.

Shaun Simpson: For years I have been struggling to silence the critics and prove I am as good as I think I am. Even now I still feel I have more to give sometimes. I am a slow burner, it took me four or five years to get good in MX2 and it’s taken me three or four years to get up to speed in MXGP. I do think that given the right tools next year we could push right from the very beginning and carry the momentum from now.

MX Vice: Have you anything sorted for next year?

Shaun Simpson: Not as yet, we are still in negotiations but we should get something sorted hopefully in the next couple of weeks.

MX Vice: Are you confident it will be a good package?

Shaun Simpson: Yeah definitely, you need bikes and a rider to go racing, it’s not that hard but it’s getting something you can work with and feel comfortable with, that’s what I’m looking for.