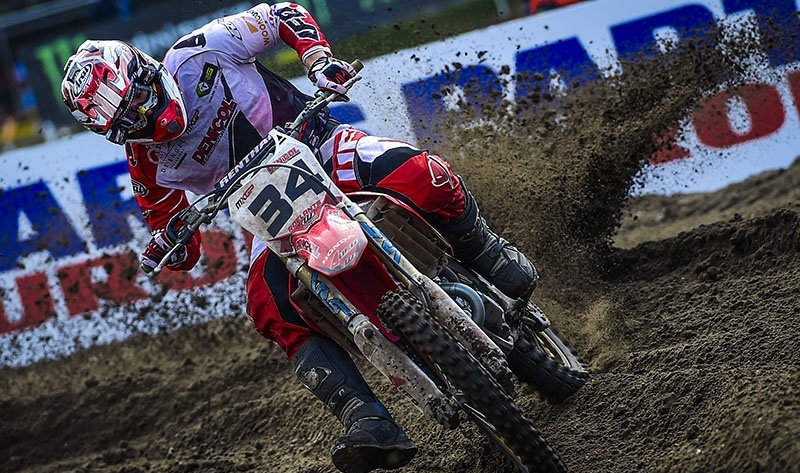 Catching up with: Joel Roelants

Joel Roelants had a terrible 2013 in his debut season on a 450 but this season he is really showing his potential.

The Belgian has had a good start to the season and his fifth overall in Holland vaulted him to ninth in the championship – not bad for a full privateer!

Roelants career was on a high as he arrived at Matterley Basin for the 2012 British GP. The then CLS Kawasaki rider had won a GP and was a podium contender every week, but Roelants dislocated his hip that day and for the next year and a half was a shadow of his former self.

Now back as a privateer Roelants is starting from the bottom again but is proving his ability on a 450 with his results so far this year.

Roelants will be one to watch as the season goes on and could well be a factory rider again in 2015. We caught up with a happy and relaxed Roelants after his fifth overall in Holland.

MX Vice: A very good day today how do you feel about it?

Joel Roelants: We switched up some things last weekend and ten days before the GP I started working with Kees Van Der Ven again. So we are going in the right direction I think now. We have been testing a bit with the bike and also with me so i am really happy about that and I hope we can build from this and keep riding top eight our top ten.

MX Vice: You are obviously a privateer this year but your results have been really good so far, did you expect that?

Joel Roelants: I don’t think my results have been good! I wanted more before the season but not everything went the way we wanted and we have been struggling a bit. For sure I still feel I can grow a lot so it’s good.

MX Vice: Is it your goal to get back into a factory team next season?

Joel Roelants: Yeah that would be nice but for now I am just thinking of riding and trying to get results. If you get good results then everything else will come so that is the most important thing for me.

MX Vice: Have you had any talks with HRC Honda about filling in for Max Nagl or getting to use his bike?

Joel Roelants: No we haven’t talked about that because we have our own people and they do a really good job. It would maybe be a bit disrespectful to them because they make good stuff so I see no reason why I should use his bike. I am happy with what I have, of course I am alone in the team so we have to do everything ourselves and it can be a bit difficult to see where you are at because you have no teammate but I think we are getting there and we have been working really hard.

MX Vice: Were you disappointed not to be in a factory team this year?

Joel Roelants: I had some good offers but I wanted to work with these people and get myself back on track after last season.  Last year was a really shit season and I think from now on we are going in the right direction and I hope we can keep progressing like this.

MX Vice: I was at the corner were you dislocated your hip and you were in a lot of pain that day -did that injury affect your 2013 season or was it other reasons?

Joel Roelants: It affected it in the way I could only start to train in the beginning of January and I have been off for four months. But in my head no, I knew what I could do and I knew what I was capable of but I didn’t feel the groove on the Yamaha. Now they have completely new bike and they are going in the right direction but back we were struggling and also Frossard was Struggling.

It was bad for me but it is what it is and that’s why we choose to go alone with ourselves because then we can do what we want and show some speed again.

MX Vice: Does today’s results lift your confidence and change your goals or the season or is this where you expected to be?

Joel Roelants: Yeah this is where I want to be. I just want to keep improving and trying to become a better rider and then we will see.