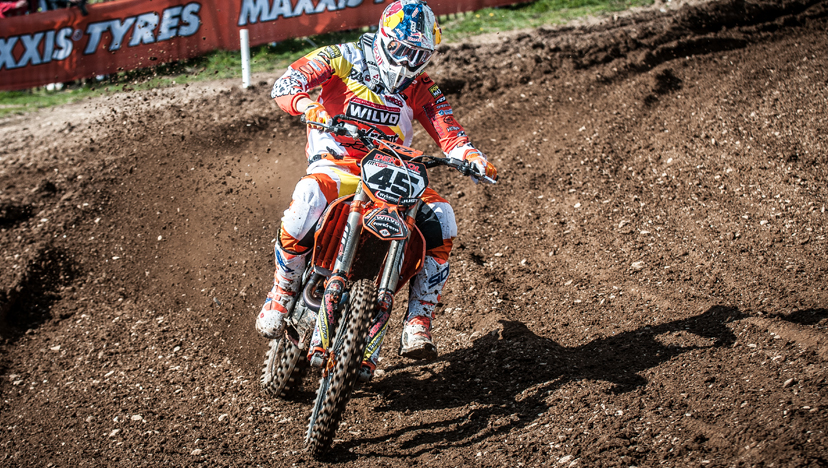 Although he is riding injured at the moment, Jake Nicholls managed to come out and win the opening moto at the first round of the Maxxis British Championship this past weekend. We caught up with Jake when he was walking back from the podium to get his take on the day, among other things.

MX Vice: Jake, everything seemed to be going well through the winter period before you had that little off.

Nicholls: Yeah, I had a little off when we were out in Spain, which put me back a bit. It was three weeks before the first round, and I was on the sofa struggling to move. So, it wasn’t a great start to the year, but it’s gotten better since then. We went to the first GP pretty beat up; I genuinely didn’t know whether I would be able to ride or not. So, we rode around and got a few points – it was the same last weekend. I had a bit of a crash last week, but still got points.

This week I improved a bit. I came home, and I’ve gotten better to be honest. I’m not one-hundred percent by any means, but it’s helped being home. It’s gone better than I expected today, to be honest, especially after I hit my head last week.

MX Vice: Coming into this round, did you just want to get some points on the board and stay fit?

Nicholls: Yeah, my thing coming in was I wanted consistent finishes and to end up in the top five. Like I said, I had a pants run up to it, so that was what I was going for. Then I came out in the first race, and got a holeshot; I went from riding around in fifteenth at a GP to leading the race on a fast track. I had pressure all race, but I stayed strong and went good.

MX Vice: Have you changed anything this year? Obviously it’s a different team, but are you based at home or are you still in Belgium?

Nicholls: I’m living at home now. So that’s a big change obviously – I’m not in Belgium at all. I’m just happy, I get to go home tonight, relax – I’ve got a weekend off next week. Belgium did me a load of good, I learnt a lot, but I got sick of it in the end. I didn’t really have a life; I had a few friends here and there, but I missed Suffolk. I’ve got a select few friends, so I struggled a bit. Of course, racing the Maxxis British Championship means I can be at home racing, without it costing me a fortune to travel.

MX Vice: I don’t think you’re doing the MX Nationals next weekend, as you’ll be resting up. But what do you think about the new series? Do you like the sound of the ‘Fastest 40’ etc?

Nicholls: Yeah, it looks good. It a shame I can’t ride, because I’m starting on my back foot, it would have been nice to ride and get more. But I need to let myself heal up. It was only six weeks on Tuesday since I broke my back, so it isn’t long at all really. But hopefully I’ll get to one or two during the year. We have a real busy year, but every now and again we have two weekends off, and I can’t handle that. One is alright, but two is too much. It would be nice to go and do one.

MX Vice: Thanks for your time, Jake!