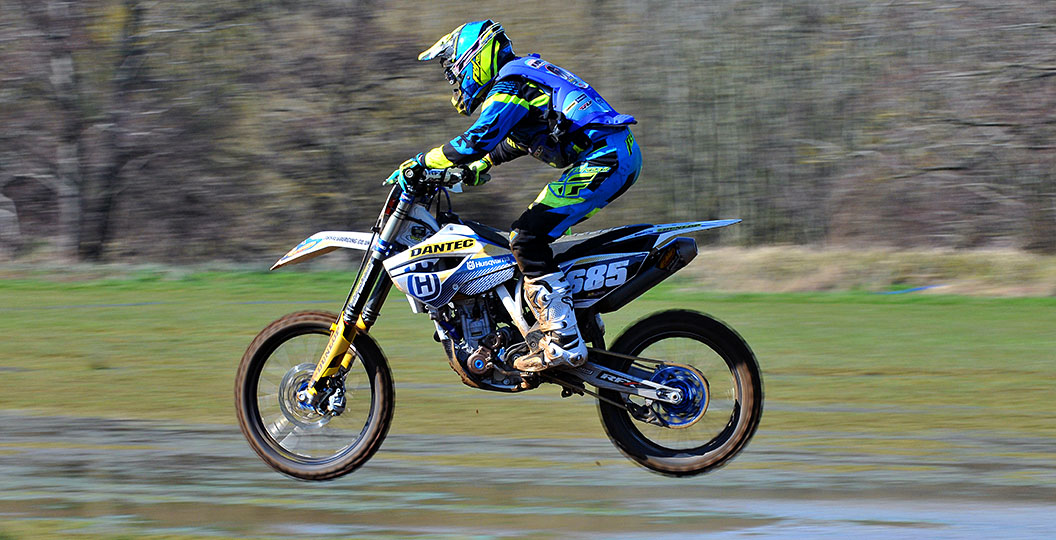 Catching Up with: David Edwards

One of the most intriguing stories to follow this year has been the return of Husqvarna UK, as they tackled the prestigious Maxxis British Championship once again with some title contenders on their bikes. We recently caught up with David Edwards, the Husqvarna UK brand manager, to discuss the season and the future.

MX Vice: For those that don’t know, what exactly is your role at Husqvarna and what does it entail?

David Edwards: I am the UK brand manager, so I’m responsible for the brand, which is kind of like everything. It’s the sales, marketing, motorsport – it’s about achieving corporate objectives, then handling motorsport and things like that.

MX Vice: Were you with KTM before and then got moved over?

David Edwards: No, I was with Kawasaki actually for seven years, as an area manager.

MX Vice: Dantec Husqvarna UK was undoubtedly one of the best-presented teams this year. Is that something that Husqvarna pushed for?

David Edwards: The interest started before my time. Matt used to run a KTM team, so he had that time with Shaun [Sisterson]. They were talking about 2014 and the projects that were available, and the Husqvarna thing happened. Initially it was just an agreement and then as we, the brand, evolved and developed and we got our colours and ID, we asked Matt to paint the truck a certain colour and for the bikes to be a certain colour. Personal sponsors were down to him, as long as it reflected the bikes and what they are like in the showroom really. If they were orange or black – that obviously wouldn’t be good.

MX Vice: So if there was a company that one of your supported teams got involved with that does not reflect the brand well, would you step in at that point?

David Edwards: Yeah, the people have got to be right. From a corporate point of view, you’ve got to always look like Husqvarna and be represented well. The guys have always done it well, run the right logos, the right pullovers and that sort of thing.

MX Vice: There are some teams that don’t do that, but having Dantec Husqvarna UK in the paddock certainly made it seem like more of a professional sport, which must have been ideal.

David Edwards: Yeah, absolutely. Every team we have going forward have it in their contract that their bikes must represent our core colours, white, blue and yellow. I would not like to see a black Husqvarna – it’s pretty key. We’ve got this primary colour like every brand.

MX Vice: I guess you couldn’t be happier with how the results have been this year. Did you expect the guys to deliver a championship?

David Edwards: I wouldn’t say expected. We always knew Steven would be challenging for the title. But Nathan’s first year on the 450F, it was probably a bit of a gamble by the team and by himself. It has been amazing to watch him ride for the UK customer, let alone us. I think the year has surpassed any expectations we had. I just hope next year is as good – if it is I’ll be chuffed!

MX Vice: Are you disappointed to see Dantec Husqvarna UK go? Obviously you now get to build a new relationship with the Phoenix Tools team.

David Edwards: Yeah, definitely, but you’ve got to look forward and Matt has made his decision. They were a great team full of great people and it’s sad to see them go.

MX Vice: So, looking ahead to next year, will you want to replicate these results with Phoenix Tools? There will be a lot of consistent frontrunners on the team.

MX Vice: How did the deal with Bradshaw come about? Did you approach him or did he come to you?

David Edwards: He sort of got in touch with us about his training schools, so we had a meeting with him about the future and what he was planning to do. In those discussions we talked about how he is not finished as a rider and how he wanted to do his own thing. We were looking for somebody else and it just worked really.

MX Vice: So does he have similar support to Phoenix Tools, but he’ll just be under his own tent?

David Edwards: He has got support, but I wouldn’t say it is similar – they have different support really. Obviously the Phoenix Tools team is a lot bigger.

MX Vice: Finally, how far ahead do you look into the future? Do you have a plan of where you want to be in three years time?

David Edwards: It would be nice to say that in three years we will have another British championship, because we have the MX Nationals now with Nathan. But, from a planning perspective, various areas of the business have to plan up to two years in advance. Racing? Phoenix Tools are a good example actually. They are going to be new to us next year and we’re not going to judge them as such, because we want a team that has the right people, the right attitude and that we can grow with, so that in five years we have the same team with the same people that are doing a good job.

Hopefully, going forward, we can keep a bit of consistency and see the results improve. There is nothing wrong with the bikes, they are really good, and the riders are great. But it is two completely new things. The team need to know how we work; we need to learn how they work. There are a lot of variables that we need to manage and it will grow in time.