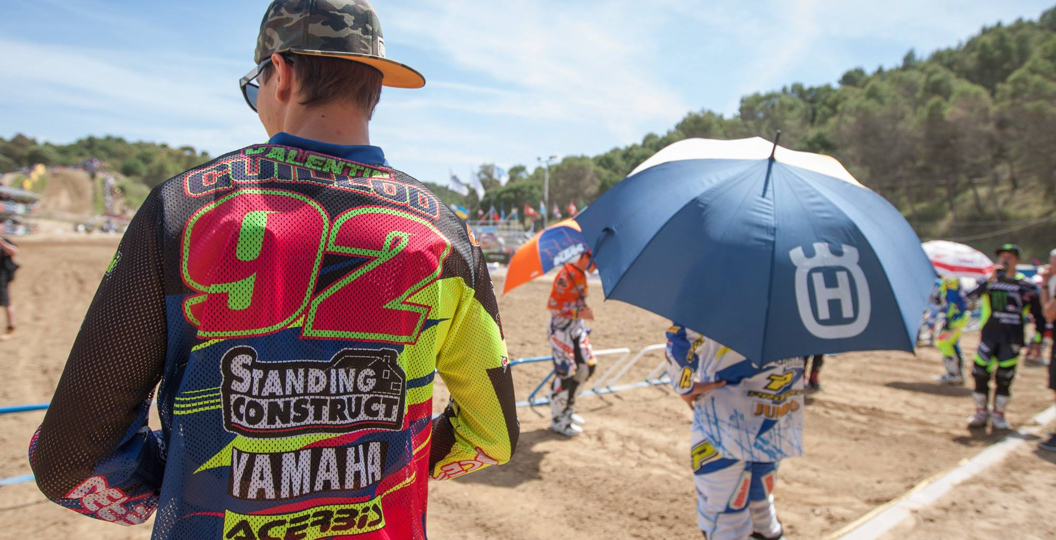 When Valentin Guillod re-signed with Standing Construct Yamaha earlier this year, it seemed like an obvious choice. The Swiss rider was always full of praise for his team and had reached new heights in his two years beneath the awning, hence why the announcement this morning left most a little shocked. With rumours running rampant, we called Valentin to get his take on what went on and find out what the future holds.

MX Vice: It’s important to get your side of the story, so tell us a little bit about what’s gone on with the Standing Construct team.

Valentin Guillod: I decided to split from Standing Construct, because they organised a new physical trainer for me. I had to go and live in Belgium, and Yves [Demaria] was becoming only my riding trainer. Everyone saw how we were working together and the great results we had, so I accepted. The team said that I rode really badly in sand this year, but I accept that it’s not all about that – that’s staying between Standing Construct, Yves and myself. In the team we know what was wrong, but I’m not going to continue more on that.

I want to thank the Standing Construct team, because we had some great results, their sponsors and also Yamaha for their support.

In the press release it sounded like this was solely the team’s decision, but it was partly your decision to step away?

Yeah, it’s me. I explained to the team what my plan was for the winter; make three supercross races on the 450F, take my break and then start riding in January. Then they came and said ‘we have a new physical trainer for you and you will not ride supercross.’ I didn’t accept that, as when I signed my contract it was decided that I would stay in the south of France and my trainer was Yves Demaria. They changed the rules a little bit and I don’t accept that, which is why I decided to split.

Yves will also be leaving Standing Construct and sticking by your side then?

Yeah, exactly, Yves will spend one hundred percent of his time with me. He was the guy who wanted to train a guy who was bad in 2012 [referring to himself] and we became the champion, seventh in the MX2 championship and also fourth. I will continue to work with the guys who have believed in me.

What we can say is that I broke the contract with Standing Construct, but I keep my contract with Yamaha. They will find a place for me with a team.

All of the rumours about a change of manufacturer or move to America are false then? We can squash those now?

They are not true. For sure I had contact to go to America, but it was in the middle of the season. I will continue with Yamaha though, because they believe me and I would like to thank them.

Presumably this won’t massively disrupt your preparation for 2016, as you’ll have the same bike and trainer as you originally wanted?

Yeah, exactly; now we are speaking with Yamaha about what we are going to do, but I’ll stay with Yves and continue to live in the south of France. For sure I will ride more in sand and everyone will see that. I will continue like this and try to do my best.

Do you think the Standing Construct team’s comments about your ability in the sand were justified or slightly harsh?

You know, I signed one contract and then they changed the rules. I’m a bit sad about their reaction and how they are acting, because they are forgetting what Yves and myself bring to them. I’m sad it’s finished like this.

All year you have been extremely thankful to everyone at Standing Construct, so you obviously got along with everyone well prior to this?

Yeah, I rode for the team for two years. They believed in Yves and myself; we were improving and making the best results on the team. Everyone was happy, but in one moment they decided to change. The biggest thing is that at the beginning our goal was to make some podiums and win some GPs, and Yamaha wanted to show that the YZ250F was a good bike that could run up front.

When the door was open to contend for the title, we were excited but it is racing and things happen like this. I think the team didn’t accept that I was fighting for the title and they made some mistakes, so wanted to change everything. They broke the confidence that we had within the team.

Obviously you had some injuries as well, which stopped you from challenging for the title, so it wasn’t just your ability in the sand…

We have to look at everything; it’s not just about one sand race or one injury. We have to look at the whole season. We started very late with the contract and Yamaha bike. We were on a stock bike from January to the beginning of February, whilst my competitors were on their race bikes. We saw that at the first five GPs I was not at my best, but I kept pushing the team to find a better solution with the engine; it wasn’t matching my riding style.

We saw in Spain I won the GP and then in England I beat Jeffrey. In France I had some bad luck, as someone jumped on me and broke my foot. It was difficult to come into Maggiora with that, but I tried to ride and score points. In Belgium I had a really bad GP, but it wasn’t because I didn’t practice much in the sand. It was because I was really busy in my head, with contracts and many proposals with big money from other teams.

I preferred to stay with Standing Construct though, because I believed in them and they believed in me. It was less money, but we were like a family. When I started making bad results they lost faith in me and wanted to change everything. They didn’t believe in Yves too, so I’m quite sad they acted like this.

With everything that has happened now, do you regret not taking one of those deals from another manufacturer, like Suzuki, with a lot of money?

No, because I’m really happy with the Yamaha. It’s a great bike and the company is great, all the people who work there are nice. It’s not about the money; I think it’s about the confidence. They believe in me, which is why I decided to continue with them. Now it’s just the team who don’t believe in me anymore. For sure I had nice offers from other teams, but I’m happy with what I have.

Finally, what are your goals for your first year in MXGP? Do you think you can challenge for podiums, or are you looking to finish in the top ten?