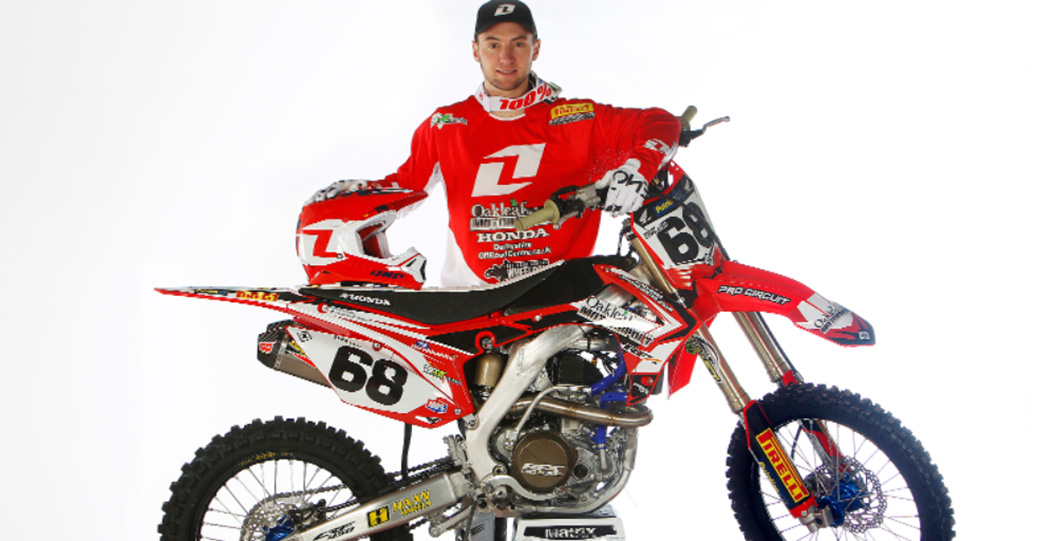 Carless to debut at SW Premier

March 8th will see the first outing of Shane Carless on his all new Oakleaf Motorsport Honda at Whiteway Barton. Shane will be looking to kick off the outdoor season in style aboard the CRF450 supplied by major sponsors Debyshire Off Road Centre, who are also the dealers of the team replica bikes. This is new start for both rider and team as there season together last year became a struggle with injures, but both are looking to get back to winning ways this year challenging for the Phoenix Tools South West Premier MX Championship and other top flight events.

Shaun Anthony: “Having made a big push in the UK motocross scene over the last 4 years with Kawasaki we took a step back from the big set up and full time commitment with lack of funding committed at the end of the 2014 season. A lot happens behind closed doors, for the work effort we were putting in we wasn’t seeing the right commitment back. We had a great relationship with Shane and Priit but to be as big as we got, we needed more funding which got worse instead of better. When we left Kawasaki and I was in contact with Dave Thorpe at Honda straight away, we had a couple of conversation’s  prior to this season but this year seemed right for what we wanted to achieve in 2015, now I wish we stated the relationship a long time ago.

“We have great team partner at Derbyshire Off Road and Dave understanding us as an ex rider it’s an easier way of us being understood. I tried at Kawasaki to push sales of bikes using our team but always hit a brick wall, now we have replica bikes on sale it shows that there behind us 100%.  We are in our first year with the manufacture and we have had to start at the bottom again but for us to decide to stay as a team with Shane seemed right as we both have something to prove and hopefully with the smaller setup the pressure will be off and the performance on track will become better. Shane and I have always had a great relationship and that’s a big thing with team and rider, Shane’s been working hard on the bike and back in his comfort zone of working full time with all this in place and a great bike under him built buy the team and sponsors I know he will be back on form . For us as a team we want to go back to our roots and race the local Phoenix Tools South West Premier MX Championship, it fits well for the promotion of our title sponsor Oakleaf Building and the team sponsors around us, Shane has put himself in for the British championship as well which the team will support him bike wise but for sure we will be seeing the fun come back to our team until the time is right for bigger things.

Shane Carless: “I’m looking forward to the first championship race of 2015 with Oakleaf Motorsport Honda this weekend at Whiteway Barton. The team and I worked hard with the new Honda and are very happy with a strong motor under us. I am hoping for good results this year as we have good sponsors and bikes to get the job done”