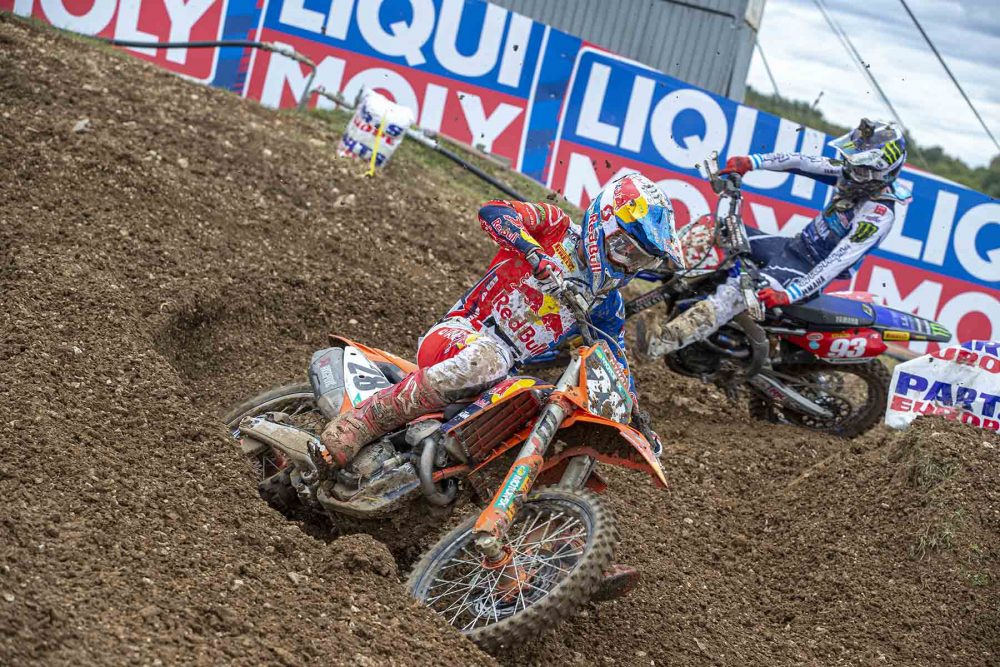 As Tom Vialle crossed the finish line following an epic finale in Turkiye, the sense of relief, excitement and achievement was hard to ignore as he celebrated claiming his second MX2 World Championship.

Behind rival Jago Geerts by just two points heading into the last round, the Frenchman came into the decider full of confidence and riding like he had nothing to lose. Having whittled down the gap from 26 points after the opening moto in Finland as Geerts faltered down the stretch, the consistent Vialle’s ability to keep plugging away paid off handsomely.

Ending the campaign with five moto wins and three second place efforts on his way to winning three of the last four overalls on offer, this exceptional run ultimately proved enough for him to beat Geerts by a measly four points in the standings.

“I’m so happy. To finish the season like this is so nice. I felt good today even if the track was a bit sketchy. When I had the tip-over in the second moto I thought ‘oh, it’s over’ but then I saw Jago had gone down as well so I got up as quickly as I could. We were riding so fast. I won some time. It was really crazy and I was lucky but that’s part of the game,” he explained.

“This is my final race in MX2 so it was special. I wanted to enjoy the last few races and with the team, who have given me such a strong home for four seasons. To have the title for the second time is amazing. The first one was crazy but also this one because it was so tight. I had to come here and go 1-1 but that wasn’t so easy.”

Although he eventually triumphed in 10 of the 18 rounds and won 17 of the 36 motos in MX2 to run out a deserved champion, there were times when it appeared unlikely he’d take home the crown.

Struggling with the new bike, suffering some bad luck such as the mechanical in Germany that forced him to retire and committing some uncharacteristic mistakes, his road to glory certainly wasn’t all plain sailing. Moreover, how superbly Geerts rode throughout the majority of the campaign was another factor, for the gifted Belgian was nigh on unstoppable when on top of his game and not making costly errors.

Swapping the red plate on numerous occasions with Geerts over the course of the crusade, as both men had spells of dominance, the #28’s ability to handle the pressure, keep his cool and stick to the task at hand underlined his class. Indeed, winning seven of the last 11 overalls further punctuated his unwavering focus, as the technically precise and skilful Red Bull KTM pilot flexed his muscles when it mattered most. “What a day, what a year, what a championship,” recalled Joel Smets, Red Bull KTM Factory Racing Team Manager.

“I don’t think I have ever felt stress like that in any season, even in my own racing career. We’ve been in close situations before but we knew it would all go down to some very tight action today and Tom was able to deliver. I’m so grateful to everybody behind us and I like to think that somewhere and somehow Rene was looking down and enjoying that one.”

Some additional numbers of note come from how he won his third successive Fox Holeshot Award by getting out of the gate fastest 10 times, plus that he led the most laps and had six qualifying race wins.

Following his remarkable three-year spell in MX2, where he impressively bagged 24 overall wins, 46 overall podiums and won 44 individual motos from his 70 GPs, he ventures to America on a high.

Heading stateside with the best years of his career ahead of him and with plenty of positive momentum, the 21-year-old will quickly get down to work to refine his supercross skills while adapting to life in the USA.

Mimicking the path travelled by fellow Frenchman and Red Bull KTM rider Marvin Musquin, who also ventured to the US after winning two MX2 titles, it’ll be intriguing watching his progress and how he handles this immense challenge.

Supremely talented, extremely dedicated to his craft and desperate to build on his exceptional MX2 spell in the next chapter of his burgeoning career, it’d take a brave man to bet against him enjoying further success in America.