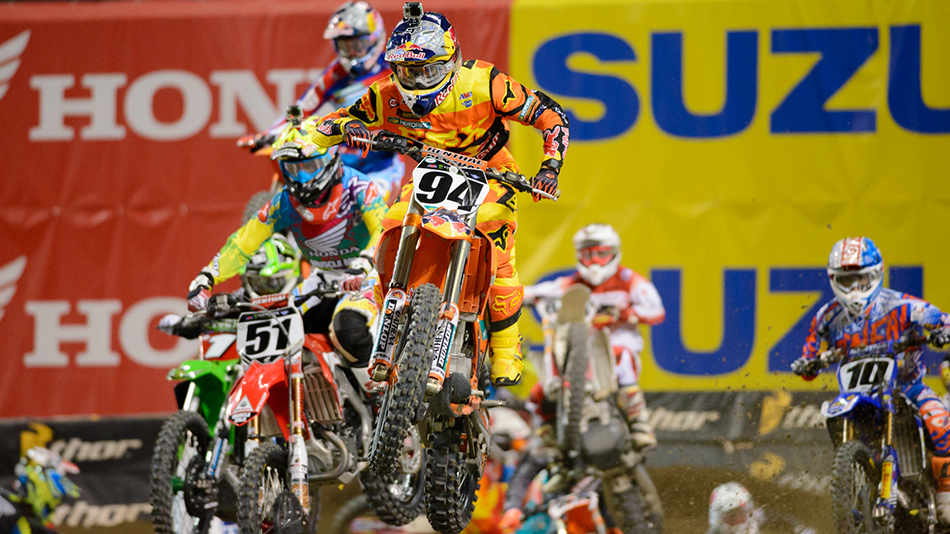 Has Ryan Villopoto wrapped this title up?
On paper, Villopoto had his worst race of the season so far. When you dig a little deeper and realise that he had food poisoning, and as such missed most of practice, a sixth place suddenly does not look so bad. It’s evenings like this that separate winners from champions, and Villopoto stuck it out to claim sixth. He even mounted a late race charge to pass Weston Peick.

Looking at his closest rivals in the points chase, it’s only really James Stewart that looks to have the speed to challenge him. Stewart is fast, but has been inconsistent, which has been his downfall this year. Dungey is still in this, but he does not appear to have the outright speed, as he has had only one win this year.

Can James Stewart beat Ricky Carmichael’s all time win record?
Stewart looked fast all day, and I’m not talking ‘fast’, I’m talking ‘lightning fast’. He won his heat, posted several incredibly fast laps in practice and sat as the favourite going into the main. That was until the gate dropped, as he had a terrible start; he sat well outside the top ten exiting turn one.

That’s when you could have easily written him off, and thought he might get top five – well, apparently not. James put on a charge and threw down one of the best races from an individual rider I have ever seen, coming from his terrible start to take the overall win – overtaking every big name in the books. No one crashed or suffered real bike problems; James simply came through and made them look like B class riders. It’s nights like this, when you really have to appreciate the talent he has on a motorcycle, and what better way to beat the GOAT’s win record than with a race like that?

Will Ken Roczen recover from a couple of very tough races?
If we’re being honest, Kenny had an average night. He started the main by taking the early lead, and ran up front for the first half before slipping back down the order for no apparent reason. In the end, he finished one place above Villopoto in fifth – not what we’d expect to see.

Rumours are flying around, and it’s all but confirmed that Ken is going to be on a Suzuki next year. Is that already affecting him mentally, or is it the long haul of a full 450 season? Whatever it is, he’ll get it figured out – it’s very easy to forget this is only his first year on the big bikes.

Can the Pro Circuit Kawasaki team sweep this entire series?
Calling Saturday night a challenging night wouldn’t be an understatement for the PC team. PC’s star rider had the worst night of his supercross career, with a crash in practice leading to a shoulder injury, and his (other) shoulder popping out in the race.

Davalos now leads the championship, and the future of AC’s title challenge is unknown – we’re still awaiting updates on AC and if he’ll be racing next weekend. He did ride out of the stadium under his own power, so we’ll have to see what goes on during the week, and if Aldon Baker can perform another miracle.