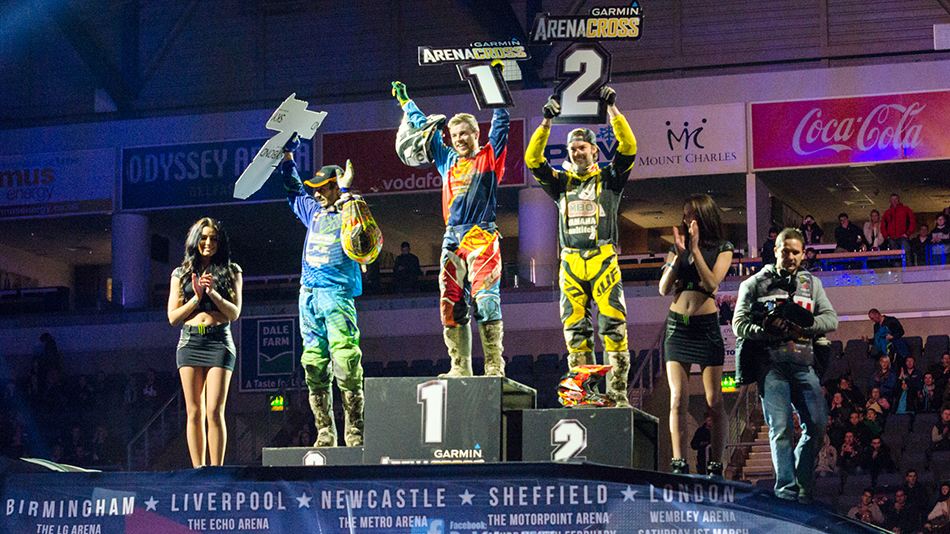 Steven Clarke took the first win of the season with an impressive holeshot to chequers victory in the final on the Dyer and Butler KTM. But it wasn’t that simple!

Kristian Whatley had smoked his two heat races, winning the first one after putting a classic block pass on Bradshaw and running away with his second heat. But in the main he didn’t quite get the start he needed and found himself in fourth before a flurry of stupendous laps saw him in second and closing on Clarke for the lead.

It looked like Whatley was going to win, his whoops speed was unmatched and the MBO team were going nuts but then Clarke responded, The KTM man found a sneaky line in the whoops of his own as Whatley’s arms started pumping up.

Clarke had stayed mistake free and mentally strong under the pressure to take the win with Whatley a very impressive second and Fabien Izoird coming through the pack for third.

Clarke was buzzing after his win and said: “I just got out to a good start and tried not to put a foot wrong… I knew if I didn’t make any mistakes it would be hard for him to make the pass.”

Kristian Whatley was fairly content with second after the arm pump: “I didn’t get the start and muscled my way through in the first couple of turns and it was the best I could do really. I got a bit of arm pump catching Clarkey. I thought I had it but after a couple of laps behind him I started getting arm pump so I just backed it off a bit. I had a good day all day so it’s a bit of a bummer to end on a second but overall I am happy with it.”

Third place man Fabien Izoird admitted his start let him down: “The start was key but I touched the gate, then I almost crashed with McCoy in the whoops section but I was able to get on the podium. I would like to win like everyone would but it wasn’t to be tonight – maybe tomorrow. The track was crazy and very technical with the ruts.”

The action came thick and fast all night on the rutted track with the LCQ providing unparalleled simultaneous crashing probably never seen before!

Bryan Mackenzie had the lead and looked to be in the final only to crash taking second place Ryan Voase with him in the whoops. Meanwhile third place Carl Nunn crashed in the corner before at exactly the same time as the leaders taking out a battling Gordon Crockard and Tyler Villopoto in the process!

That was five riders down at once and that meant Ashley Greedy took the win from young James Harrison. However in more drama Bryan Mackenzie was informed at the last minute that he would be in the main and that sent the mechanics frantically fixing a bent up bike.

Brymac started in the second row but finished a fine sixth in a main he didn’t think he would even be in!

Tyler Villopoto had a nightmare. He went down in turn one in his first heat and had to DNF. That put him on the outside gate for the second heat and he got put in the tuff blocks in turn one but stayed on before crashing out in the whoops trying to come through the field. He then started on the second row in the LCQ and was battling with Gordon Crockard when they both fell victim to Carl Nunn’s mistake while battling for a top five. Villopoto and Crockard will want to make amends tomorrow!

The Rookie final was also dramatic. Mitchell Lewis led early before Todd Kellett forced his way to the front. Lewis was still right there with Harrison and Glenn McCormick also in tow.

As Kellett began edge his way clear Lewis cased a double, collected Harrison allowing local boy Glenn McCormick, who just missed being collected in the carnage to take over second after a bad start! Joe Clayton also made it onto the podium with a third when all was said and done.

The big wheel 85 class saw Aaron Booker take the win but Harry Kimber was just as pleased when he crossed the line after coming from last to second. The kid was fast. Lee Perfect rounded out the podium on the Pendrich Kawasaki.

The small wheel 85s was won by a solid Ben Burridge with Ryan Mundell not far behind in second.

Buster Hart got to meet the Monster girls after an impressive win in the 65cc class but the proud fathers where even more pleased with the results than the riders I think!

The freestyle entertained the crowd too with some impressive whips and backflips but Edgar Torronteras stole the show with his ability as a human beat box – this guy has to be seen to be believed!

The head to head was again exciting with Neville Bradshaw taking a hard fought win in the final from an aggressive Daniel McCoy. Bradshaw ended up hitting the gate in the main otherwise he could have been battling for a podium.

An honourable tough guy mention goes to Jack Brunell who was riding injured from Dortmund and then had a huge crash in his second heat race. Brunell over jumped the triple after going down in the corner before then gave it too much throttle into the corner, the bike hit the up-coming berm pinned and then shot straight into the perspex hockey protection around the seating section, the force of the bike knocked a section of it down with Brunell hitting the ground hard himself – Jack was lucky to even hobble away.

There will be a brand new track for tomorrow but the dirt will remain soft, and while it may not be ideal for the riders, hopefully it will help to produce some great racing again on Saturday night!