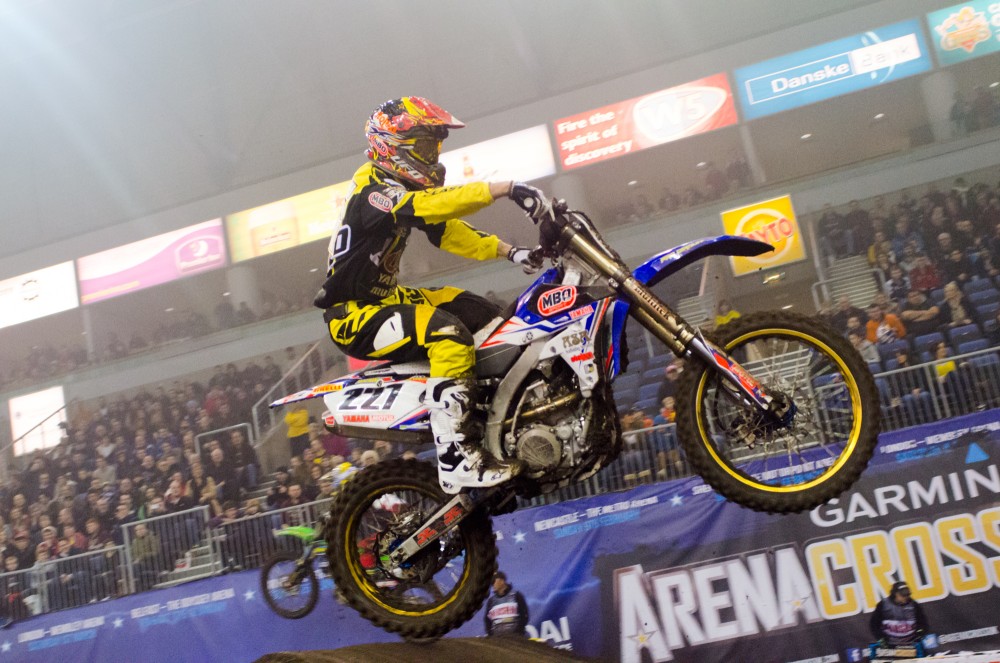 The track from last night has been reversed but the dirt is still as soft as ever. The triple is now right after the corner and it was proving difficult to do once the track got rutted. The track crew were working at it all day in between practice sessions to make it a bit safer, but it makes it hard to judge the pro practice times as each group never got exactly the same track. But one thing is for sure, Kristian Whatley is still flying. Whatley was the only rider to dip into the 24 second range and looks unbelievably comfortable out there. The two LPE Kawasaki riders Izoird and Rombaut were second and third fastest and both will be wanting to be on the podium tonight.  Those guys are solid. Cyrille Coulon and Daniel McCoy were fifth and sixth and McCoy in particular is looking much more solid today, but still extremely aggressive. Last night’s winner Steven Clarke was eighth fastest but with another start Clarke could challenge for the win again. His Dyer and Butler KTM teammate Jamie Law was in seventh and looking very comfortable. In the first practice only Law, Whatley and Coulon where jumping the first three whoops while everyone else was only doubling. It was a big time saver but in second practice the fastest way was blitzing them and once more Whatley was again the fastest through them. Elliott Banks- Browne crashed twice in the last session and doesn’t look quite as comfortable as he did last night. But the same could be said for most of the riders as the new track design seems more difficult to ride and less enjoyable. The ruts up to the triple and in the whoops are treacherous but apparently you also have the odd rock in them that makes things even more unpredictable. For some riders tonight survival will be the name of the game. Tyler Villopoto again is struggling in the ruts, but as he said in our interview with him, he just wants to get into the main tonight and survive. The rookies again look to be between Kellet, McCormick, Harrison and Mitchell. It will all be about the start and limiting the mistakes and that’s where Kellet and McCormick seem to have the edge on the rest. It is going to be another explosive evening and again getting a start and avoiding the carnage will be key. Whatley though looks to be the man to beat tonight if he can get the starts, it really is hard to believe that this is his first Arenacross. Report: Jonathan McCready