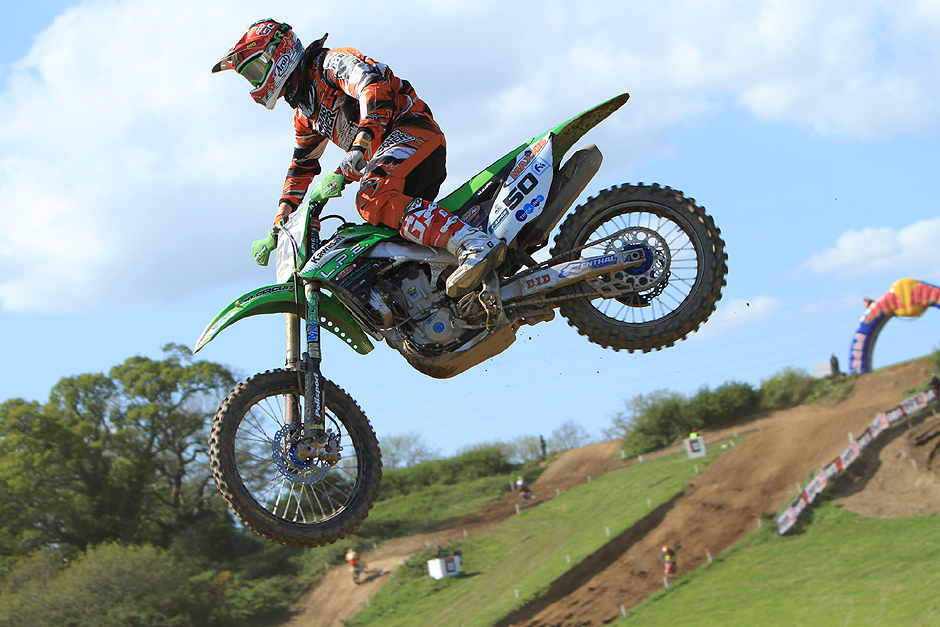 Following its postponement the Maxxis Henderson LPE Kawasaki squad headed off on the long trip to Cornwall for the opening round of the 2012 Red Bull Pro Nationals Championship. With most of the country suffering from heavy rain it was a surprise to arrive at the hillside circuit in beautiful sunshine.

The weekend started early with Ray Rowson opting to race the two stroke class on the Saturday in preparation for the Pro races on the Sunday. Ray’s results on the two stroke progressively got better as the day went on, finishing a solid second in the last race after a pair of fifth places in the opening races for fourth overall on the day.

After the promising results on the Saturday, the team was looking forward to Sunday. Sunday morning started off with the new format of free practice and qualification being split into two sessions, allowing riders and team’s time to change settings on the bike in between sessions and it worked very well

During the free practice all three riders used the time to get comfortable with the track and get ready for qualifying. In the qualifying session Martin was able find his groove quickly and posted the fourth fastest time in MX1. Meanwhile MX2 riders Connor Walkley and Ray Rowson both producing strong laps to be inside the top 10,

Following the lunch break it was time for the first race of the Red Bull Pro National Championship and as the gate dropped Martin made a strong start getting into third place early on. Both Connor and Ray were battling hard in the mid pack, until on the third lap Connor took a heavy crash and knocked himself out in the process. Also at the front Martin suffered a problem with the bike causing it to stop in a corner and losing him a number of places. Ray’s race was steadily getting better after his slow start with him eventually making it into 4th place in MX2 and just behind Martin, who would finish in 6th place in MX1.

With Connor having to visit the local hospital for a series of checks, it was down to Martin and Ray to produce the results in race two. After a good start Martin was inside the top 3 and riding well. For Ray it was to be a troubled start as he suffered a few small mistakes and found himself at the back of the field. Martin’s second race of the day was to be much stronger with a 4th place finish in the MX1 class for fifth overall on the day. Ray continued to battle hard all race and would bring home valuable points in 14th place for 8th overall on the day.

“The two stroke races on the Saturday weren’t the best with brake issues in the first two races, but I got a good second in the last one and was happy. Then the first race today I had a mega ride from a bad start and got fourth in MX2, and in the second one I got up to third and then crashed and never really got going again.”

“Coming into today I’d been suffering with some bad luck of recent weeks and was looking for a fresh start. Qualifying went well and I was looking forward to the first race where I got a good start and pushed forward. But on the second lap the bike cut out and it took a few kicks to get started again, so I had all the work to do again and finished 6th in MX1. The second race I got a better start and then Aubin went down and I was in third and closing in on Sword until I had big moment around the back and lost my rhythm and Aubin got back past me and I ended up fourth in MX1 and fifth overall on the day. I was a bit happier with the second race and pace I had so hopefully I can crack on from here.”

“Today’s been a big improvement after the bad luck of last weekend. Martin finished in fifth overall in MX1 and Ray finish eighth overall in MX2 and produced a great first race result. Ray has shown that he has his speed back and is getting back to form, it was just a shame he had the couple of mistakes in the second one. Martin has made a solid start and we can build upon this result over the coming weeks. Poor Connor suffered a rough day though after riding really well in qualifying before having a massive crash in the first race and knocking himself out cold. He had to go to hospital to have a few checks and tests done and the first report is that there’s no broken bones or internal bleeding which is a good sign and his CT Scan showed no serious damage to his head, he is a bit beaten up and sore but hopefully with some rest over the next few days he will be fine to race again in two weeks time for the teams next meeting.”