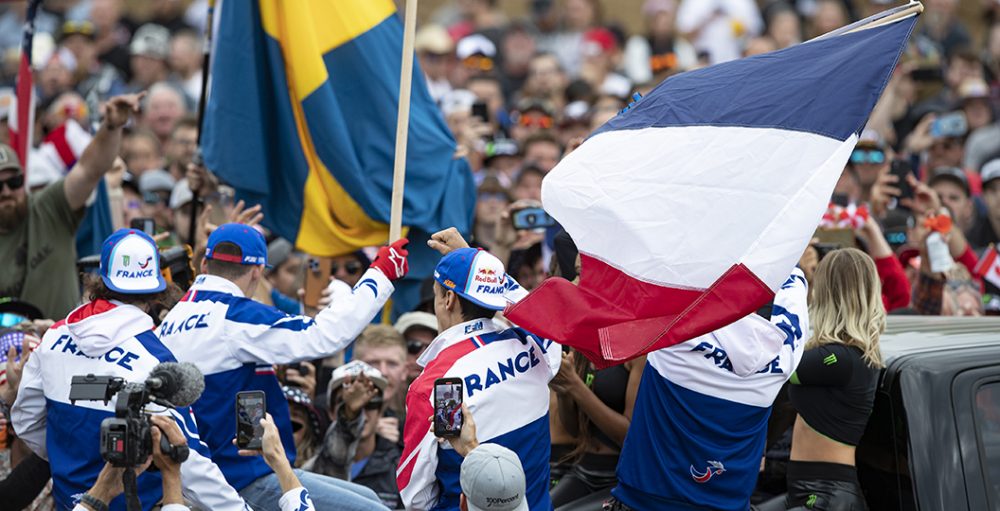 Fresh from what was an extremely positive debut MXGP campaign, Maxime Renaux heads to the Motocross of Nations ready to turn heads for Team France.

Having moved up to the premier class after impressively winning the MX2 World Championship in 2021, Renaux rapidly went about establishing himself as one of the frontrunners. Comfortable at the level and relishing battling with the likes of Tim Gajser, Jorge Prado, Jeremy Seewer and Glenn Coldenhoff, it was incredible how he immediately hit the ground running.

Finishing third in his first ever MXGP moto at Matterley Basin before finishing sixth in the second one to go fourth overall, this gave him the confidence he needed to produce the goods. From here, he kept up the momentum by banking his first 450 overall podium by bagging second at Mantova.

Then, in Argentina, things got even better for the Monster Energy Yamaha Factory rookie, as he put in an exceptional ride to secure his first MXGP moto win. Managing the tricky, fast conditions expertly, Renaux then backed this up with a second in the final moto of the day to claim second overall again behind Gajser.

“I had a really good day; I am happy with it. It did start slowly yesterday, but step-by-step, we made some improvements on the track. I could win the first moto after a nice battle with Tim, which I had to fight to the end,” he explained to Yamaha’s website.

“The second race was a different story without a good start, but I could pass everyone except Tim, which was good. I couldn’t ask for more in my first season in MXGP; I just want to keep going like this, keep it on two wheels because that will be really important, and try to be inside the top-three every time.”

While he had his first off day of the campaign at Portugal, where a nasty crash in the qualifying race scuppered his weekend, he still valiantly rode through the pain to ultimately record eleventh overall despite falling in both motos.

The talented, fearless and fiercely determined youngster then instantly put his results at Agueda behind him, as he embarked on an wicked five-round stint that was punctuated by him winning his maiden MXGP overall (in just his ninth GP) in Spain by virtue of a flawless 1-1.

Getting fantastic starts and looking at home on the hard-pack circuit, the other competitors were no match for the 22-year-old who underlined his skills with an accomplished display.

Some other notable efforts in that stretch arose from his second overall at Trentino, third overall at Maggiora and fourth overall at sandy Sardegna, with him displaying his speed and ability to hold his own on a variety of surfaces.

Sitting a striking second in the standings heading into his home GP at Ernee and cementing himself as a legitimate top three guy week in, week out, things didn’t go to plan, however. Faced with wet, muddy and treacherous conditions on a course he’d competed at only once previously, Renaux struggled to find his rhythm on his way to going 9-6 for eighth overall.

The German GP at Teutschenthal then saw disaster strike, for Renaux suffered four vertebrae fractures after a horror crash off a jump in the qualifying race. Promptly forced out of the GP to get assessed to begin his road to recovery, it thankfully wasn’t long before he was back in action.

Due to the hefty breaks either side of the Indonesia MXGP event, this meant he only missed one round. So after enduring a spell on the sidelines, Renaux returned at Loket and swiftly settled back into the groove. Taming the hilly confines of the renowned track outstandingly, there was much to admire about his race day.

Taking home a sensational victory in moto two to accompany his third in the opening moto to notch second overall, this highlighted his toughness, blistering speed and smooth adjustment to the 450.

While he only snapped up one more overall podium finish to close out his campaign (in Finland), much positivity could still be extracted from his moto wins in Sweden and Turkiye, plus from how he consistently mixed it with the premier pilots in the stacked class.

Ending his successful debut campaign in MXGP fourth in the championship even though he missed one round, the ultra competitive Renaux was clearly the best rookie and showed why he should be considered a legitimate title threat for many years to come.

Set to come back even stronger next year, for now, though, his immediate focus will be on helping propel France to glory at the Motocross of Nations. Not one to be intimidated by any adversaries and always cutting an assured figure, he’ll be excited at the challenge of battling it out with the likes of Chase Sexton and Eli Tomac.

Joining forces with previous champions, Dylan Ferrandis, who comes into the event under an injury cloud, and the experienced Marvin Musquin, who’ll interestingly be on a 250, France certainly have the class to be contenders.

While this is a squad filled with titles in America and on the world stage, much intrigue has surrounded France’s selection process yet again. Leaving out the fit again Romain Febvre, Tom Vialle (opted out as he’s to moving to the US) and Thibault Benistant due to shoulder surgery, they’ve certainly left plenty of talent at home.

No strangers to odd and unexpected team choices in the past, this year’s decision to hand Musquin the MX2 spot has raised eyebrows, especially considering he’s raced a 450 for over six years.

However, upon looking back at some more of their curious picks, such as opting for Steven Frossard and Ferrandis instead of Christophe Pourcel, Febvre, Jordi Tixier or Musquin in 2014, going for Enduro expert Christophe Charlier in 2017 when Ferrandis and Benoit Paturel were injured and omitting Musquin in 2018, they’ve remarkably worked out brilliantly.

Coming out victorious in five consecutive MXoN showpieces from 2014 to 2018, France’s unorthodox selection criteria has amazingly served them well more often than not.

Come RedBud this time around, they’ll be hoping their choices will prove to be masterstrokes yet again, as Renaux and co. will be gunning to secure another famous victory at the same venue France were triumphant at back in 2018.