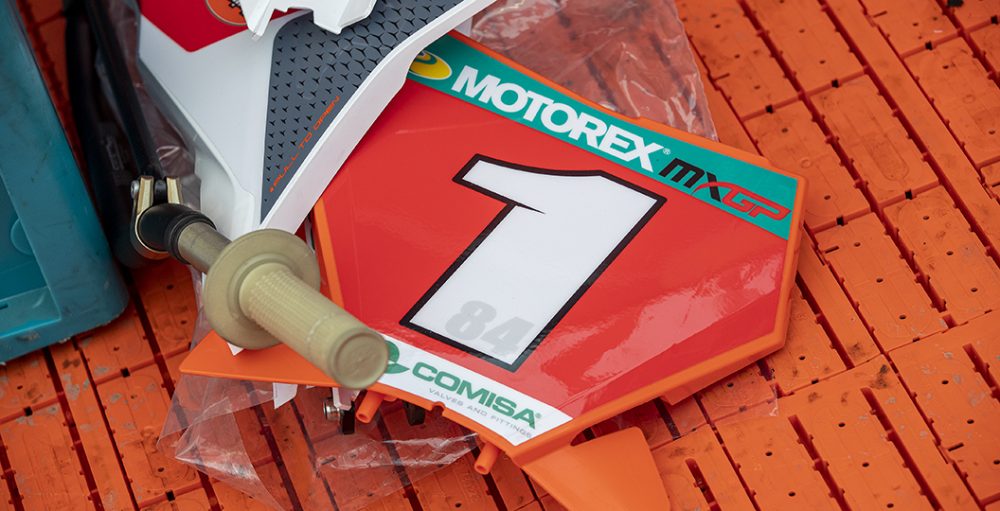 There is a lot going on beneath the Red Bull KTM Factory Racing awning; Tom Vialle is edging closer to the lead in the MX2 class, there is a new bike to develop and Jeffrey Herlings is still waiting to confirm which series he will compete in. Dirk Gruebel, the man with input into all of the above, provided some insight into what is going on in an exclusive MX Vice interview from the Grand Prix of Portugal, round four of the 2022 FIM Motocross World Championship.

There is so much to take from this lengthy chat – no stone was unturned. Herlings’ situation is very up in the air at the moment, but it was intriguing to learn more about his condition and the direction that things are going in. There is no question that the Lucas Oil Pro Motocross rumours are gathering pace with each week that passes. Anyway, there is a lot more on that at the bottom of this page. Share your thoughts over on social media (motocrossvice on Twitter and mxvice on Instagram).

MX Vice: You have one guy here in Portugal, Tom Vialle, and you got a win. Tom is definitely getting back to his normal self, after a slow start to the season. You can see he is getting there.

Dirk Gruebel: Yeah, he is getting more and more bike time every week. The confidence is coming back as well. The win in Argentina gave him a bit of a boost, of course, and another win today was important. The speed is picking up. Like you said, he is on his way to his old self. We are making progress with the new bike and just need a little bit more time. Tom needs a little more time too, but we are getting there. Step by step.

Tom just said that the progress that he made with the front end between Mantova and Argentina was a bit of a game changer for him. What went into that?

Yeah, like I said, it is a new bike and we need to understand how it works first and then how to get the best out of it. There has been a lot of riding and work, especially because there were four weeks [in the off-season] where he could not train. Parts arrived late too and so on. We have found a good balance on the bike now and the trust is back. Well, he is building the trust at the moment. Let’s put it that way. You could see that he could push again today. That is nice to see and what we need.

Have you been in contact with the USA much? They are riding supercross, sure, but it is quite well known that they are struggling with the front end too. Have you been comparing notes a little bit?

Yeah, we are exchanging ideas. Supercross is a completely different sport – they are running way harder set-ups than us and that is needed. They also have the outdoor season coming along though, so we are exchanging ideas and sharing information. That brings us forward. There are so many guys out. Jeffrey [Herlings] is hurt, so every guy who is riding and testing helps us. We are going in a good way.

You know what the very best Tom Vialle looks like. Based on what we saw today, how close is he to that?

Oh, he needs to find another five to eight percent. I think then he will be where he needs to be – he showed some things today that were normal for him in the past and we have been missing that so far this year. He is building the confidence and then we will see more of that.

The MX2 class had twenty-three riders today. You have been around long enough and saw MX2 when it was at its strongest – it used to be much healthier than the MXGP class. I personally think that we need to do something about EMX250, because there are too many riders staying there for glory versus going into MX2 to ride around in fourteenth. Everyone wants a trophy and so on. I think that the fix, quite simply, is to push guys out of EMX250 sooner. What is your take on the situation?

Yeah, it is a difficult topic. I agree that we definitely need to have more riders in MX2 – that field needs to be full up. How to do that is a difficult question, because whoever does not get a ride in MX2 stays down there [in EMX250]. They should move up when they have the speed. They are not far away from what the frontrunners are doing with lap times. To push someone out who does not get a good ride is difficult though. I do not know what the fix could be, but they should for sure take a look at it.

So, Jeffrey. Unbelievable that this happened and I am very happy that he won the title last year, because that takes a bit of the pain away. I heard that everything is healing as it should and there have been no complications. Everything is going okay, although it sounds it is taking a little bit longer now. What is the situation with the injury?

It is a difficult bone, put it that way. It is healing slowly and he just got off of the crutches; he is starting more intense rehab now and putting pressure on the foot. We need to take it week by week – a foot is quite important in motocross. You need to be healthy to go out there and compete. I also wish that it would go quicker, but we cannot rush things. It makes no sense to get him out here when he has only healed up to seventy percent. He would be able to ride, but why take the risk? He is not fit and the championship is gone. It would just be for wins, which is of course a nice thing to have as well. We need to wait.

If he just got off crutches, does that mean that the best-case scenario would be that he starts riding at the beginning of May? Would that be realistic?

I hope that it will be sooner than this. Once he gets back into the programme, then he could make big leaps. He could jump back on the bike, feel good and have no pain. We are not at that stage yet. We need to wait.

There is another championship coming up. I am not sure if you are aware of that [laughs]. It is one that KTM would like to win and could do with winning, because MXGP is not going to happen and 450SX has been difficult. I have heard that we are at 50/50 at the moment. What can you tell us about those conversations? I heard that he was in Austria last week for a meeting. Is that true? What can you tell us? We will take anything.

From the PIERER Mobility Group’s point of view then, of course, it would make sense that he rides in America, because if he is fit then he will be a championship contender. For him also, it would be nice to win a championship. He needs to be fit though. It is not like it is a walk in the park to fly to America and race there in the AMA. Nothing is decided and everything is still on hold. We need to wait and see the progress with his healing, then at some point we need to make a decision.

Jeffrey is a very competitive person and likes to win things. I think that it is safe to say that he would like to go to America and have a go at winning a championship, instead of coming here and just going from race to race with no end goal.

Yeah, of course. I mean, for us it would also be nice to win races and GPs as well.

Well, he is one away from one hundred. That is a weird situation as well.

Exactly! This is also a nice thing to achieve, but over there it is a title on the line. For the company, it would make perfect sense. For me, having the team here and only one rider, I would prefer that he would stay with my team, but it is not my decision at the end of the day. It all depends on how he heals up and then we decide on which championship he is going to compete in.

Say he goes to America, can you run an entire season without a 450F rider under this tent or would you have to get a fill-in rider in? KTM have done a lot in this championship and won it last year. I feel like you have earnt some good credit with your sponsors, but would there be pressure to make that happen?

Even for us, it would be good to have that bike out there. It would help us develop it quicker and everything, but who are you going to take? We tried with Mathys Boisrame and it went wrong. The 450F is not a toy at this level and, unfortunately, he got hurt straight away in the first outing. What can I say? There are not many names on the list where I can go, “Okay, let’s pick this guy now and give it a try.” It is a potential danger. The bike gets bad mouthed quickly when another guy crashes, just because they are not ready to ride it or not on that level. It is a potential risk as well. It is not a bad bike, do not get me wrong, and people crash on our bike as well as other bikes. It is just the sport lately – it is happening a bit too much. I do not see anybody who could step in.

The problem is that you cannot get any fill-in rider. You need a guy who will be in the top ten at least. There are expectations at KTM. If a guy gets on your bike and rides around in sixteenth, that is not going to help anyone. You cannot take any ol’ rider.

It is also about developing our bike. We need to have a certain speed and base with it. Like you said, we cannot just let a guy ride around in twentieth and then we will be happy. That is not the case, for sure not.