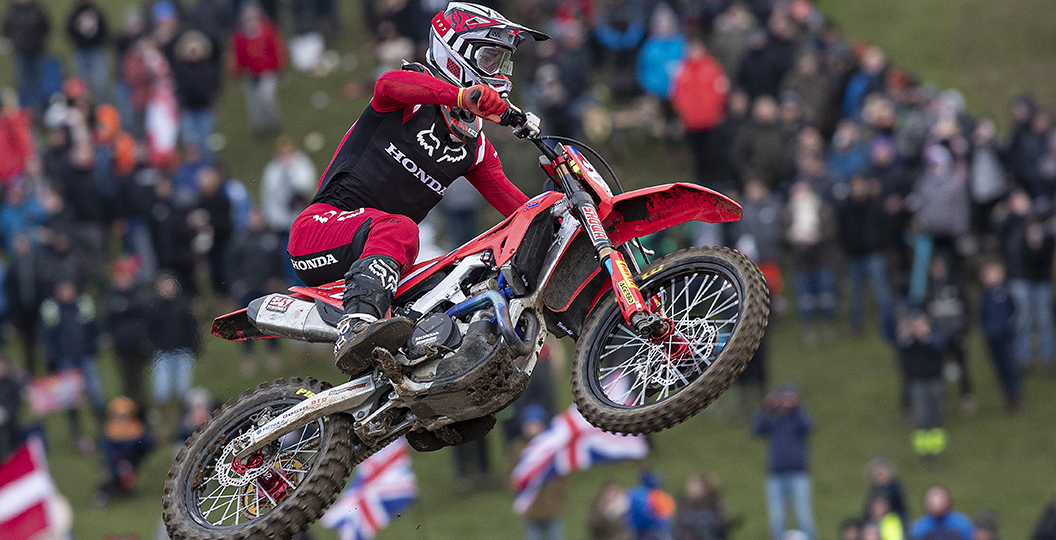 The third round of the 2020 FIM Motocross World Championship is edging closer with each day that passes, and Tim Gajser is staying ready by attending rounds of the Slovenian national series. The most recent event was run on Sunday and, unsurprisingly, he won convincingly. That should not be a surprise to anyone! What can Gajser extract from those races where he is truly the clear favourite? That is a talking point in this MX Vice interview, as well as his start to the season and that all-new CRF450RW.

MX Vice: You raced in Slovenia on Sunday, but we do not need to talk about how those races went for you. You obviously won. What can you take from the races though? You are not being pushed or battling with people, so what is the benefit compared to practicing? Is it just getting into that race mindset again?

Tim Gajser: Yeah, exactly. That is the most important thing and why I decided to do these races. I just need to get back in the racing rhythm. It is always nice to have some races before the MXGP season is going to start, and obviously it looks like we are in the off-season now. We have to do some races before August or whenever we are going to get started with MXGP.

Have you been in Slovenia since Valkenswaard? Did you spend a bit of time in Italy or somewhere like that? What have the last three months looked like?

Basically, I have stayed at home in Slovenia the whole time. I have also bought a house on the beach in Croatia, so I spent a couple of days over there as well. I am moving from here to Croatia. I have my private tracks here in Slovenia, of course, and I also found some tracks near my house in Croatia. It is a good place to be – I can train normally and everything. It is good.

Looking back on the first two MXGP rounds, I don’t think they could have been any better for you from a riding point of view. There was that first-lap crash at Matterley, sure, but take that out and I think you would be either be sharing the red plate with Jeffrey [Herlings] or have sole possession of it.

Yeah, exactly. I was feeling good immediately, even at the off-season races that we had in Italy. It was good at those races. We have a completely new bike for this year, so I did not know what to expect coming into the races. I felt good and comfortable immediately though. We tested a lot in the winter to make the bike exactly how I like it, and I put in a lot of hours to get used to it. It really was completely new.

I expected to do well at Matterley Basin, because my speed was there, so I just needed to put everything together and make no big mistakes. I obviously did a couple of those in the first moto there. I was really disappointed – I knew that I had the speed. I could show that in the second moto though, as I made a comfortable gap and controlled the race. I was really happy with my riding and how ready I was, physically and with how the bike was reacting.

I was pretty happy with the beginning [of the season]. Valkenswaard was great too – not many people expected me to ride so well in the sand or battle with Jeffrey. It was great. We obviously did not race anymore after that, which was a shame. I was in good shape and feeling comfortable with a lot of confidence, but that is just how it is. We just hope that the races can come back soon.

The bike is completely new, like you said. When you got on it in the winter, did you jump straight on and immediately feel that it was so much better? Did you have to work at it to make it suit your style?

When I sat on the bike, I immediately felt really good and that it was amazing. We had to change many things, for sure, because the bike was completely new. It was kind of like changing manufacturers! It was a completely new bike from 2019 to 2020. Yeah, that was what it was like. When I first got on the bike I thought, “Wow! This has a lot of power and is handling really well.” It was way better than the previous one and I was super happy with the improvements that HRC made.

This could be a tough question, because the answer could be a lot of different things. If there is one thing that you really prefer on this new bike, compared to what you had last season, what would that be?

Yes! I would say the torque of the engine – that is easy [laughs].

Does the new bike get a lot of the credit for the improvements that you made in the sand then? Did it just give you that little bit extra to run with Jeffrey in those conditions?

That is a tough question. For sure, you know, if you want to make a great race then both the rider and the bike have to be in perfect condition. I was training hard and felt like I was ready. I was also feeling that I had a great bike underneath me. I think it was the combination between those two things that made the riding that much more enjoyable and everything.

No one really knows when MXGP will start again, but the middle of August is probably a good bet. What would your plans be before then? Could you just spend the entire time riding in Slovenia or would you need to go to Italy for testing?

We will see when the official calendar comes out and we know exactly when we are going racing. I think that I will go to Italy to do a bit of testing, but until then I will stay here and train hard as I have been doing. Nothing is really going to change, apart from a bit of testing. The Japanese are always working to get ahead and come up with something new, so I will have to spend some time in Italy to test new stuff.