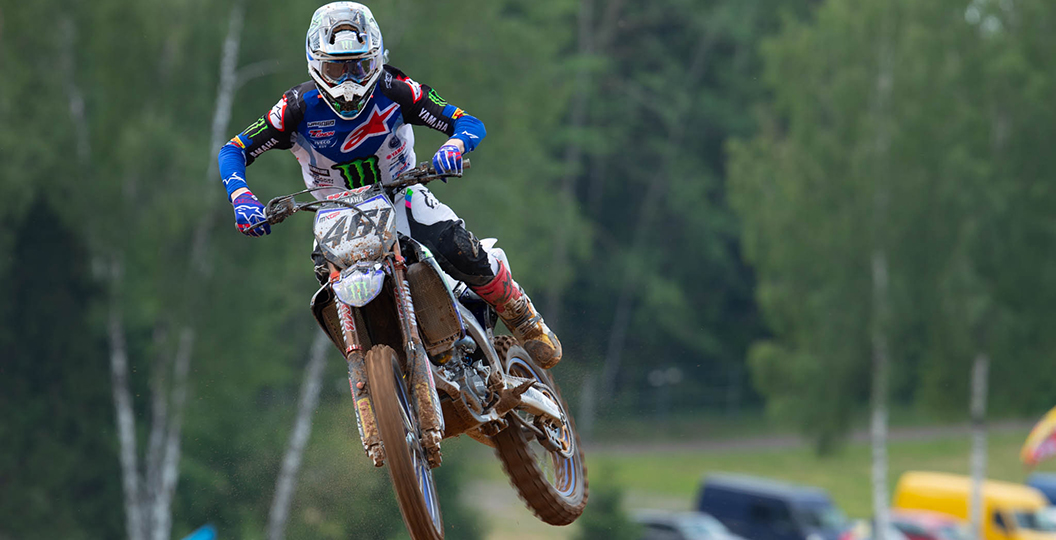 It has now been a month since Romain Febvre returned to the 2019 FIM Motocross World Championship and the progress is astounding. It is clear that he is now on the verge of claiming his first overall win in more than three years, which would be a massive leap in the right direction. It is not possible to get much closer than he did at the Grand Prix of Latvia! A weird day left him in second overall, but tied on points with the winner, and being so close was discussed in a quick MX Vice interview at the ninth round.

MX Vice: Close to winning this weekend. You definitely had the speed in the first moto. That was clear. In the second moto that was clear, especially towards the end. Tied on points, so you are getting closer. These are all good things.

Romain Febvre: Yeah, like you said the speed was there this weekend. In the first moto I started good. The first ten minutes I was really pushing and then I felt really good, but I got arm pump pretty bad in both arms so I was just set up in fourth and I could not attack the track and rode my own pace. I just kept fourth, which is a good result, but I feel that I could finish minimum third. It is how it is. Then in the second moto my arms were better, like every second moto.

My start was not good, but I did a good pass and a good first few laps. At the end I was really going forward, because I knew I needed to pass my teammate to be on the podium. I told I want it because [Tim] Gajser was just in front of me and then with the points it was quick. I said, “Maybe I win?” No, all three of us had the same points. A little bit happy about my riding in second moto, but a little bit disappointed to not win today.

Is there any reason why it took you a little while to get going in that second race? Obviously the second half was much stronger than the first.

Yeah. In the beginning of the first moto it was going well, but I just had a bad moment after around ten minutes. I got a little bit of arm pump also, but it was not too bad. It was when I was behind [Jeremy] Van Horebeek. I do not know. I could not really find good lines. I just had one lap really thinking, “Change your lines. Be just smoother!” Then I keep going and I changed lines. I did not make any mistakes and then I caught the guys on the front. I am really happy about the riding in the second moto, but it could have been a little bit better in the first one.

Everyone said the track was sketchy this weekend. What did you think of it? MX2 guys said it was like speedway. MXGP guys have kind of said very different things.

Especially yesterday. Yesterday was really bad, because it was really dangerous. Fast, but also square bumps. There was just a little bit of sand on top. For me, yesterday was really dangerous. I took it easy yesterday and then I knew if it is going to be the same as yesterday today, then it is going to be really dangerous. Today they did work on the track much better. It was softer. Maybe for the 250F guys it was fast because they flattened some places on the track and then they had the first few laps, so it was really fast. It is better like this than if they leave the track and it was just slippery everywhere. For us it was not too bad today. I think it was good. Some places were tricky, but overall it was good.

Call me crazy, but I think at the moment this is the best you have ridden since your Matterley Basin concussion in 2016. Maybe not results but, just watching you ride, I feel like you are back to that level. Do you agree with that?

Yeah. It has been a long time that I am not riding at that level. 2018 was not too bad, but I just missed some speed. My speed was not to battle on the front. Even if I had a good start, I could not hold the speed from the first guys. I missed a little bit of speed. This winter we worked a lot on this and technique. Then this year every MXGP that I enter I have always a good lap time in the time practice, so it means that I have the speed and then physically it is coming better and better every weekend since my injury. I feel good. To be better in the first moto, not getting arm pump should help me a lot. We are working on this. We try everything we can. It is not so easy to fix that problem.

How close to one hundred percent are you now?

Like I said, if I take out the arm pump then I am not far. The arm pump came after I missed riding so much from my injury and then also a little bit riding tight, so not really comfortable on the bike. My foot did not disturb me so much but I think, if we take out the arm pump on the first moto, I may be ninety percent.