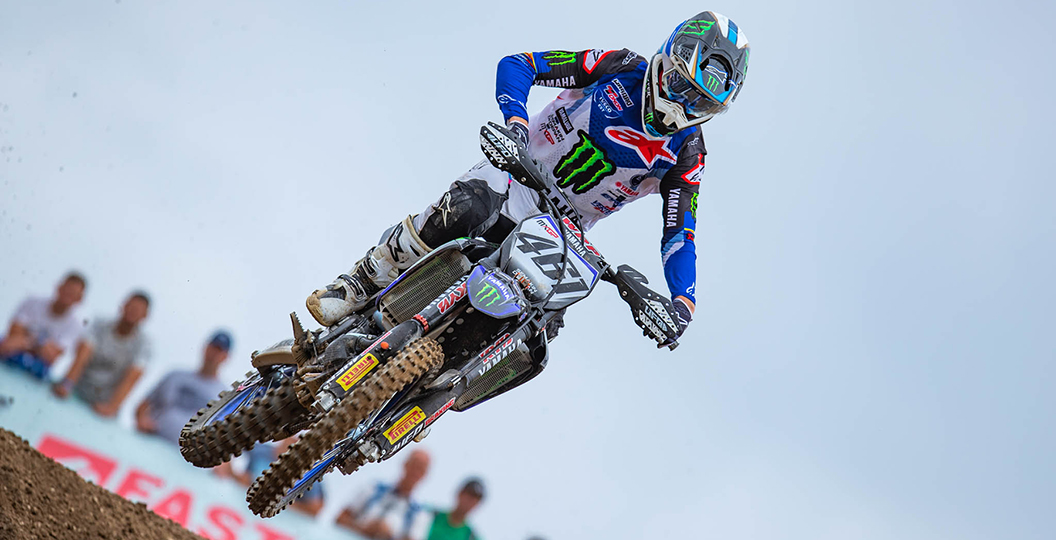 Romain Febvre faced such a drought between Grand Prix triumphs. Jeffrey Herlings was still an MX2 rider and a two-time champion when Febvre last stood atop the podium at the Grand Prix of France back in 2016, believe it or not, which really puts things into perspective. Injuries, set-up issues and many struggles contributed to his lack of success in those three years. All of that is in the past now though, as he absolutely dominated the Grand Prix of Czechia and acquired the thirteenth overall victory of his career.

MX Vice: One thousand one hundred and forty-nine days ago. That was the last time that you stood on the top step of the podium. It has been a long time. It has probably not been much fun, but you finally did it again. I cannot even imagine how emotional this win must have been for you.

Romain Febvre: Yeah. It has been a long road to come to the victory again with injuries and everything. I’m really happy about it. All weekend I was feeling really good on track, with the bike also. I didn’t make any mistakes… Two good starts. It has been a perfect weekend. I enjoy so much to ride like this at my full level. Hopefully I can do a good weekend also in Lommel.

You did not want to talk about it too much when you were waiting for the win, but now that it is over… How much of a monkey on your back was that? How much were you thinking about getting it done? I guess you can talk about it more openly now.

Yeah, not so much to say. I knew since I was back… Like the first race in Portugal, for sure it was a long way [away]. I was not feeling great with my foot. The result was good, but when I went to France after I felt that my speed was really good from there. My speed is always good on every kind of track. I just need to put all of the pieces of the puzzle together to make it right.

Sometimes I was the fastest and then made a mistake on Sunday. Sometimes I was not the fastest, but I had good motos also on Sunday to score a podium. I was close two times to the victory, but it did not happen. I really did a strong weekend going 1-1. It is always even more special. No mistakes all weekend long. It paid off.

We have obviously been talking about how fast you have been all year. You are back to your old level. Everything is looking good. Do you feel like you were on another level this weekend though? When was the last time you actually felt like you rode this well?

It is difficult to say. France I was really good. [There have been] many motos, but not like all weekend long. Some motos… I did it also when I won the first one in Palembang. I was feeling great there, but just the first moto was not so great. I won the second, but I scored second overall. In Latvia I was feeling great and on the last lap I passed my teammate to secure the podium. It is just this weekend I was faster, like everyone said.

I had a gap with my speed so I could make everything happen like how I wanted on the track. It is much easier to do it like this. When you are just faster or as fast as the other ones you do not need to really push. You can just prepare your attacks, so for sure it was easier. Like I said, I like Loket. It is really slippery. Every year it is getting bumpier and bumpier, so I like how to turn the bike on the slick surface. I think it is a little bit my positive point compared to the other one.

Honestly, not so much. The first one was a little bit tougher, because I put the pressure on my teammate and then I was first. Then I said, “Now you just need to make it right and not make any mistakes.” I was riding tight a little bit but the second one I was feeling much better after the start, because I knew the start was the key. When I started in third, I said, “It’s going to be okay.” I made the pass quick. I saw that I made a gap directly, then I just tried to not make any mistakes. My mind was open. I was not thinking about the overall.

I was just focused on my lines, trying to find better lines and everything. Even I think after twenty minutes I stalled my bike two times in one lap, that is where they came back. They closed the gap. I was even not worried about this, because I saw I had the gap. They closed from five to three seconds, then I said I just need to make a few fast laps again and then I will open the gap. It is what I did. I was a little bit confident, not too much but confident about my riding and what I can do. I showed it.

From time practice to warm-up to the qualifying race, you proved that you were the fastest. It would have been easy to get stressed, but in yourself you knew you were faster than anyone else for a single lap and over a race. You kind of knew you had it covered.

Yeah. Like you said, we had the gap. We were not all close, so I knew I was faster by minimum one second a lap if I did not make any mistakes. For sure it is easier when it is like this. You do not need to think about your speed or everything like this to find some solutions or something like this. It goes right from the beginning.

So, now you have got this one. I guess you just want another one?

Yeah, sure! Every weekend it is a new challenge. We start again from zero next weekend. I would like to win so bad at Lommel. It’s the toughest circuit in the world, I think. I like the sand. I have been preparing for Lommel. Last week I rode all the week in the sand. I did the Dutch Masters as well. I feel comfortable, so hopefully I can do the same in Lommel.