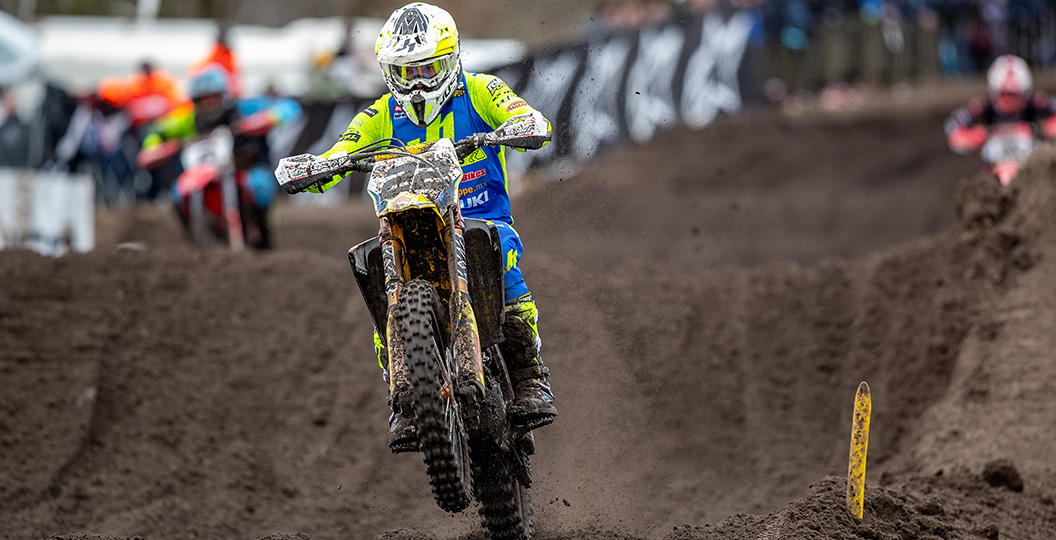 Kevin Strijbos is still at it! Competing as a team owner for the first time, Strijbos is also trying to push through a back injury whilst chasing points in the 2020 FIM Motocross World Championship. There is a lot going on in his world. All of that is talked about at length in this exclusive MX Vice interview from the Grand Prix of The Netherlands, where he failed to score points. This interview was originally included in the MX Vice post-race podcasts from Valkenswaard.

MX Vice: Bit of a rough weekend, but then what are you going to do? You are riding injured. I do not know if people even know. It is not exactly great, but you are here and toughing it out. I think you are proving that once you are healthy, you’ll be in the points quite comfortably.

Kevin Strijbos: Yeah, for now it is really difficult with my back. I am just trying do good, but it’s not easy. We are a bit off with everything. We started quite late with everything, like I said, so we are off with the bike and off with myself, because it was really busy to get everything going. Hopefully we can turn it around. Normally I would go to Argentina, but now I think we are not going to go because of the back injury.

Try to have some time off maybe, like one week, and then build up again properly. Italy is cancelled, so hopefully in five weeks I will be back in my normal shape. I think I can battle around tenth to twelfth. It should be possible. I’m not saying that I’m going for the top five or on the podium, but as long as I can battle with the guys then I will be happy.

What actually happened with the back? When did it happen? What is the status? Do you need surgery soon? How does that all work?

It started already around Christmas actually, which is already a long time ago, but then I went to the physio. They said my hips were blocked and a bit not straight. I went to them a lot of times, and it went better but not the way I wanted. Before England I just decided to go to the hospital, to see the doctor there and they said that the back was injured. I do not know the English name. I got an injection last week – the Monday after England – so again I couldn’t ride this week. Now for the surgery, I don’t know. Hopefully I don’t need surgery, because then it’s way back. Hopefully I can toughen it out and be ready.

I have just thought: When was the last time you actually rode without an injury? There was the elbow thing too. Was it years ago?

Yeah, it was. It actually started here in 2017. It started with my elbow. It has been a rough couple of years. I’m just loving it. I still like to ride, even today. I didn’t like it, actually, because I was struggling a lot with the track and with my bike set-up. It’s been too difficult. Looking forward to getting healthy, if possible!

You have had two rounds now as a team manager. What is one thing you like about that and one thing that has been harder than you expected?

The hardest part is to get everything ready. It took a lot more time to prepare everything. The one that I like about it is it takes some stress away from riding, but I need to be careful that it doesn’t take too much away from the riding. The last few months have been a bit like that. I needed to make the choice. To build a good team – small team but a good structure – and try to be ready, but for now we did too much on the team. We had to do it though. Now it is time to try to work again on myself. In the end, you still want to get results. Even if I don’t expect to get big results, I want to get results.

This is a deep question. You do not have to answer it. It looks like you have got a lot of good sponsors. Is running your own team quite a big personal investment? Is it a good thing for you to do with help from all of these guys?

Yeah, it’s a good thing with the help from my sponsors. At the moment, I didn’t put any money in myself. That’s not the plan. I don’t want to put money in for myself. I just want to try to build the team up for the future maybe. Who knows? Try to work with them. That’s the goal.

You are not going to Argentina now, but you had planned to go. That obviously would have been another big investment and another new experience for you, planning it all. How was all that process?

Yeah, that was again quite difficult. It was my first time to get everything sorted. Everything went quite well. We made a crate, everything and did all the papers. It’s all done, but for now it doesn’t make sense to go. It’s good that I know how much work goes into it. Last year, or previous years when I was a factory rider, I just called the team and said, “I want to go there. Change that!” Now I know it is a lot of work and there are a lot of things to do, so I appreciate it more than I did in the past. That is also normal, I guess, when you get older. It’s still a lot of work.

I probably should not be asking this question at round two, but I think you have already said it. This is your last year, right? It probably will be?

Yeah. It’s probably going to be. I said that for the last three years now, but as long as I want and if I can get some results it’s fine. If I need to ride like this the whole year, in twenty-third, then it makes no sense to go. I would love to be a team manager and work on stuff, and maybe test some bikes, which I think I’m still capable of doing. If it doesn’t turn out good, then I’m trying to do something like that. Hopefully I can still run the team.